Even the Word “Fracking” Sounds Obscene 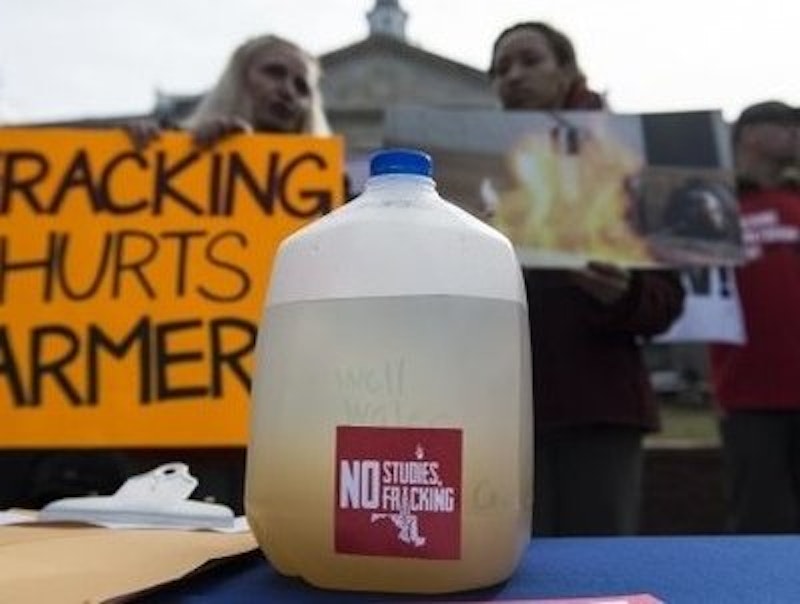 Nearly a century ago, coal and railroads were the twin sovereigns of the jagged and ruggedly gorgeous Western Maryland terrain. They provided wealth and jobs in the heavily unionized western reaches of the state until the deep mines shut down because they either ran dry or their coal was considered low-grade and even lower in demand, and the railroads disappeared because there was nothing left to haul. The mine owners left behind black lung, open mines that were leaching poisonous fluids into the region’s waterways and a collapsed economy in an already isolated region. All that’s left of the railroad is the annual autumn glory lurch through Western Maryland’s mountains at their color-burst peak.

In their rapacious and contaminated trail followed the strip miners. They were allowed by the state to gouge the mountaintops of Western Maryland, claw the topsoil and the crust of public lands, and even the campus of Frostburg State College (now University) and allow deadly pools of acids to rise up on the land’s surface and eventually bleed into streams and rivers that feed into the Chesapeake Bay to threaten what H.L. Mencken called “the world’s greatest protein factory.” The coal that was stripped from the earth’s surface was of such poor quality that it was prohibited from being burned in the state where it was mined.

Finally, by 1963, Maryland had had enough. Gov. Millard J. Tawes buckled to public pressure and banned strip mining on public lands, notably on the only college campus in the westernmost part of the state which had been desecrated by heavy machinery and become not only an eyesore but a threat to the health of the students. And in 1970, Gov. Marvin Mandel began a land reclamation program through which the state decontaminated and sealed forever the menacing deep mines and reclaimed and resuscitated public lands that had been ravaged by strip miners and turned them back to local governments for public use.

Comes now Gov. Larry Hogan, a pro-business, anti-tax Republican, who believes hydraulic fracturing or, in the pejorative, fracking, in Western Maryland will help revive the region’s economy and contribute to the state treasury. While that may be a consideration, a dubious one, fracking might also help destroy the area’s land and its residents’ health though ground water contamination, earthquakes and air pollution as it has in other states.

As of now, fracking—even the stand-alone word appears obscene—is banned in Maryland until October, 2017, under a moratorium imposed by the General Assembly. But fully a year in advance of the ban’s expiration, the Hogan Administration has proposed new regulations which it calls “the most stringent” in the nation. Environmentalists call them a sop to the fracking industry and say they will attempt again to win a permanent ban on fracking in the General Assembly next January while the moratorium still stands. A recent Washington Post poll found that six in 10 Marylanders oppose fracking, and those surveyed are evenly divided over its claims of economic benefits. Only 27 percent support the drilling technique. New York, as Maryland, has enforced a moratorium on fracking rather than pursue the unknown and, perhaps, the regrettable. What’s more, the market is glutted with oil and America now produces more oil than it imports.

Hydraulic fracturing involves pressure-pumping a mix of water, sand and chemicals thousands of feet into the earth to fracture rock and release natural gas. The site of the injection can be miles away from the target where the pool of gas exists and unknown to those nearby. The after-effect is that the toxic wastewater rises to the surface and settles to contaminate whatever it touches.

The Maryland Department of the Environment, according to published reports, is proposing multiple layers of steel and cement casing around fracking wells to prevent fluids from leeching into ground wells and aquifers before drilling is allowed. What’s not new and stringent is that almost identical safeguards are being employed in Pennsylvania where complaints abound. But the proffered regulations, as reported, would allow fracking closer to homes and private wells than was proposed by the previous administration of Gov. Martin O’Malley (D). In other words, with horizontal drilling, the gas field might be right under your house and you won’t know it’s being fracked until the chandeliers start rattling.

And here is where the deception unravels. Not long ago, the Chairman and CEO of Exxon Mobile, Rex Tillerson, joined in a lawsuit to block a fracking project—in which his own company was involved—near his 83-acre Texas horse ranch in the wealthy Bartonville suburb outside of Dallas. And it has been definitively established that fracking has caused earthquakes in Oklahoma as well as contaminated water supplies in Northern Pennsylvania.

Recent studies have shown that that earthquakes have increased dramatically as fracking has intensified in Oklahoma. Published in Science, the study showed that from 2009-13 there were 40 earthquakes annually in the state. But in 2014, as fracking increased, the number of earthquakes of 3.0 magnitude or greater increased to 580. Also reported in the same study is that the fracking wastewater injections are so toxic that the public isn’t allowed to know what’s in them. Some studies show that fracking wastewater causes cancer while others indicate that the toxic fluid affects the nervous and immune systems. The report said the industry has spent millions on lobbying to keep the makeup of the deadly fluids from becoming public.

In Pennsylvania, traces of chemical substances used in fracking were found in the drinking water of several homes in Bradford County, near Scranton, according to a study published in Proceedings of the National Academy of Sciences. The chemicals were from a pit leak at a shale gas well, according to the study. Pennsylvania’s safeguards, as noted, are similar to those proposed by Hogan for Maryland.

West Virginia has been both blessed and cursed by coal and now, in its desperation for jobs, perhaps by fracking as well. In West Virginia, abandoned coal mines are used as disposal sites for fracking waste, threatening waterways and drinking water supplies. The fracking industry has blamed acid mine drainage for water contamination. But a Duke University study confirmed that the guilty party was fracking and not the old mines. Furthermore, according to the Environmental Protection Agency and the U.S. Geological Survey, fracking wastewater is a mixture of 700 chemicals, many of which cause thyroid disease, liver and kidney disease, nervous system damage and cancer.

So, it is fair to ask, why would Hogan want to desecrate the land and the homes of the people who are among his staunchest supporters. If, as he claims, his cause is about money and jobs, the evidence disputes his case. In Pennsylvania, for example, 4500 wells have been drilled since 2007. A study conducted by researchers at Penn State University—paid for by the Marcellus Shale Coalition—claimed that fracking would create 216,000 jobs by 2015. The most recent data from the Bureau of Labor Statistics shows there are 4144 people employed in the oil and gas industry in Pennsylvania where fracking is fully underway.

The Center for Economic Policy and Research concludes, “Leasing land for gas drilling does not miraculously create a big pot of money for land owners and gas companies. The costs may very well outweigh the revenues generated. And local residents are left bearing most of the risks.”

The CEPR summarizes its findings by stating: “Fracking does not create local jobs. It lowers property values and pollutes the water we drink and the air we breathe.” The Maryland General Assembly may reaffirm that same conclusion in January despite Hogan’s brash promise of illusory riches.