Trump Has Won the Ugly Pageant

Now will he withdraw? 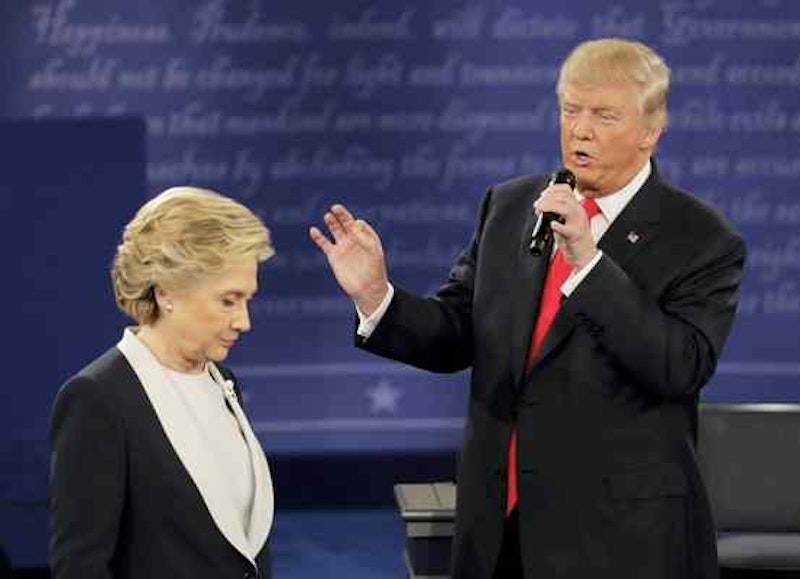 You may have a solid grasp on what was wrong with Donald Trump's performance last night. I'll get to that, but let me start with the good parts.

First, walking onto a stage and confronting someone the way Trump confronted Clinton—being in his actual body the @realDonaldTrump of his tweets—is pretty damn hard. It's hard not to be polite or try to come off nice on national television. Actually, Trump takes wild chances like that all the time. This is a problem, but is also a kind of courage. That the man is doing photo-ops an hour before the debate shows you some strengths too: Hillary was somewhere reading index cards and breathing into a paper bag.

When he started into her in the most extreme way, I couldn't imagine that it could go on for an hour and a half. I couldn't see Bill or Ivanka surviving the response shots. Remarkably, however, he managed to shift back and forth between threats to jail the woman sitting on his left to fairly smooth or not-completely-incompetent policy remarks. Again, that is something that is pretty hard to do.

Also, the “town hall format” turned out to be pretty good for Trump. He managed a fairly conversational tone and was somewhat responsive to questions. I think Hillary was a little rattled—who wouldn’t be?—and it had the effect of making her even worse than usual: rigidly scripted, sort of yelling, monotonous, utterly unconnected to the words pouring from her body. Her every step around the stage was rehearsed and physically awkward. On the other hand, she somehow didn’t make any terrible mistakes, fly off the handle or capitulate.

A little rattled, but it was surely a considerable achievement not to be extremely rattled as he equated her with Satan. Really, all she had to do was make it through, and she did that. She's extremely likely to be elected president, unless a dispositive scandal develops, which is actually quite possible.

Now, on the other hand, that was one bizarre chaotic weekend for the Trump campaign. Even I, an anarchist and a cynic, don't necessarily want the president doing what Trump did with the alleged Bill victims. Even I start thinking that maybe that's not the president's job, or the right way to make decisions or manipulate public opinion. I probably think Bill is a worse abuser of women than Donald. I'd rather not have either of them near the White House. Meanwhile, I can't help wishing that this campaign was about stuff other than that.

I'm not sure how Republicans will receive Trump's performance, but I think it’s touch and go whether he makes it through the next few days. I think he might withdraw, and he ought to. I feel that the crisis in the Republican establishment is even more extreme than it has been portrayed as being. They might be sending him a little Nixon committee today to try to get him out. If they're not doing that, they should think about what happens as Trump digs himself a deeper hole and gets more desperate and hostile. Where does he go that's more extreme and irresponsible than this?

It's disturbing that the story of the American political system—occasionally narrated as the victorious march of freedom—has led us here. We're in a Miss Universe-level ugly pageant. Trump, or as I prefer to think of him, Miss Piggy, won. A month is a long time.