It’s the End of the World as We Know It? 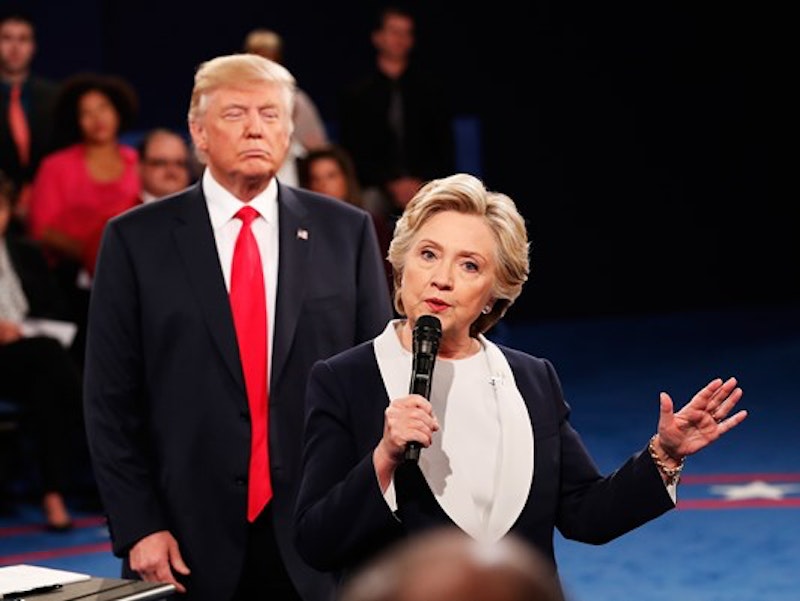 8:47—Remember, back in the mid-1990s, when it was commonplace to describe Courtney Love’s life as “a trainwreck”? That seems so quaint now, doesn’t it? Small potatoes. Love was just a celebrity going through a meltdown. With this election, the entire country is going through a goddamn meltdown.

8:55—This Washington University-specific stuff just feels so deeply, deeply meaningless. Will anyone remember it 24 hours from now?

8:56—There should no handshakes tonight. Not a single one.

9:01—You could cut the tension with a knife, even with the CNN commentators prattling on and on.

9:06—No handshake between the candidates, understandably.

9:18—Martha Raddatz won’t let Trump dance away from that ABC News bus tape. Good for her.

9:19—Ohhh, shit. Trump played the “Bill Clinton as rapist” card, and the impeachment.

9:20—Clinton takes the high road, and goes in hard. She’s litigating this. Trump’s getting twitchy.

9:21—This is turning into a reprise of the last debate, only more vicious. Are we even going to get to the questions for this one?

9:30—The last nine minutes of this debate represent the first time, in all of the presidential debates I’ve ever watched, when I felt reasonably sure that one candidate was likely to smack the other candidate.

9:32—I don’t pretend to love Hillary Clinton as a candidate, but after that exchange, you’ve gotta admire the steel necessary to pivot to a reasoned answer to a question about healthcare.

9:34—Trump is almost terrifyingly calm in his answer to the healthcare question.

9:40—The Trump campaign’s strategy tonight: get under Clinton’s skin while appearing at least slightly composed and sane.

9:47—And this is where Trump loses his cool, a little. Clinton knows. Look at her, swallowing that smile.

9:55—Trump refers to himself in the third person twice in a minute while asserting that while Clinton was a first lady, a senator, and a Secretary of State, she had the power to move Heaven and Earth in terms of taxes.

10:00—Whether or not he’s lying, Trump is doing a lot better tonight, at least in terms of his composure.

10:02—The Trump strategy for tonight: to make the debate a referendum on Clinton, and to force her to defend herself.

10:06—Never mind about the Trump rail jumping. He’s out of breath and sniffing, but not unhinged.

10:10—Clinton should just cede the rest of her time to Trump. Just let him rant and ramble on and on and on.

10:15—This is officially the longest, most painful, most exhausting 75 minutes ever. The pain: when will it end?

10:20—Trump looks so tired. Some stamina. It’s awfully rich to hear him declare that Clinton has “tremendous hatred.”

10:22—Benghazi, finally. Is it possible that we’ll actually get to all the questions? No way.

10:25—A Supreme Court justice question, from the audience. Clinton’s up first; Trump pacing like he needs a restroom, now.

10:30—None of the questions I voted to include in this debate have been asked, in large part because this debate was never truly about this question to begin with.

10:35—God bless you, final questioner, for endeavoring to lessen the tension everyone watching this nightmare is feeling.

10:36—Clinton admires Trump for the loyalty of his children, or something. Trump admires Clinton’s determination.