Anger is socially unacceptable in a nation resigned to its fate. 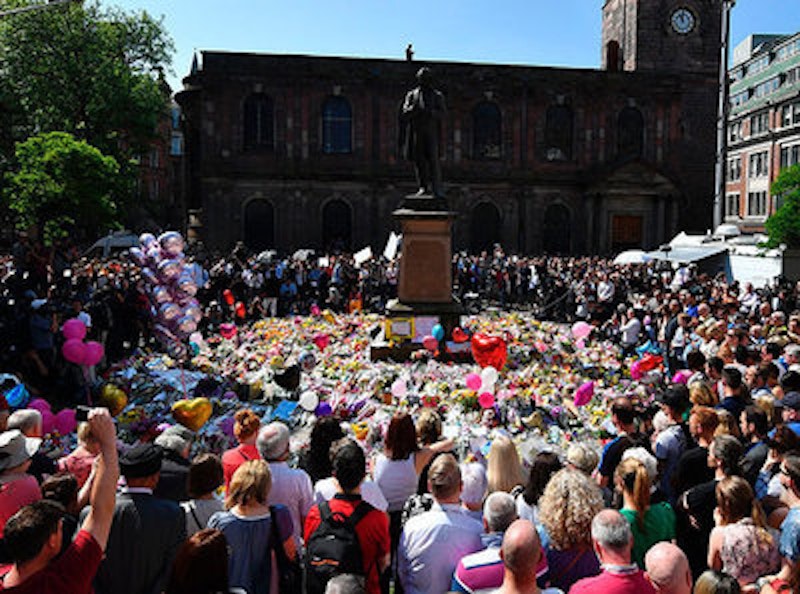 There was a lot of talk about love and standing united together in the aftermath of the devastating terror attack in Manchester last week. Barack Obama was right in tune with the official mood of the nation when he tweeted, “Through faith, love, and resolve the character of the people of Manchester has shown itself. Our thoughts & prayers are with you.” After a moment of silence to remember victims of attack, a crowd in St. Ann's Square in Manchester spontaneously started singing the Oasis song, “Don't Look Back in Anger” in a demonstration of group solidarity.

To many Britons it was a touching display, but not everyone felt like singing “Take that look off your face.” Some wanted to look back in anger. The impromptu chorus rubbed them the wrong way. It made them feel as if they being robbed of an emotion they deserve to feel. In the wake of an attack that targeted children, there's a mandated optimism in place. Follow your natural urge to speak of problems that must be addressed and you risk being called an Islamophobe, a label most U.K. citizens are desperate to avoid.

The British have had anger drummed out of them for years. The fear after these terrorist attacks is that the white working class will lose it and start beating Muslims and burning down their homes. The media and authorities wasted no time in warning about an Islamophobic backlash. The chief constable of Greater Manchester Police spoke on the steps of the police department and told the traumatized Mancunians that he was watching, so they'd better not turn to violence. That such a patronizing response produced no backlash is reflective of the docility that's settled in among the citizenry.

The U.K. government is distanced from its citizens that it now fears them more than it fears would-be terrorists. It made itself look weak by suspending campaigning for the general election for three full days after the attack, missing a perfect opportunity to show barbarians that they can’t have an impact beyond the casualties they cause. Theresa May’s announcement that up to 5000 troops could be deployed on British streets was another mistake. It's one more signal to the terrorists of the power they have, and it sends the message to the public that life isn’t normal.

The forced optimism in the air is already in the process of being replaced with a feeling of resignation that, as London’s mayor Sadiq Khan has said, terrorist attacks are now just a part of life in a big city. While he didn't state it, he means big cities with significant Muslim populations. Labour Party leader Jeremy Corbyn spoke out against his nation's foreign policy last week, blaming it for terrorism attacks like Manchester. One poll showed that 53 percent of the public agreed with him.

There's a knee-jerk reflex in the U.K. to deny any connection between Islam and terrorism. Corbyn says foreign wars are causing terrorism, but since when do such wars cause people to massacre the children of their fellow citizens? Before becoming mayor of Greater Manchester, Burnham demanded an end to “toxic” counterterrorism programs on Islamic extremism, claiming they made the Muslim community feel unfairly singled out. Muslim politicians contribute to the problem. Coun Aftab Hussain, Labour Councillor for a ward in Rochdale, England recently apologized for giving a character reference to the court during a trial of a grooming gang member who was convicted of child rape. When anti-Islam activist Tommy Robinson drove to confront him and demand his resignation, gang members smashed his windshield and rammed his vehicle.

There are now approximately 400 returned ISIS fighters in the U.K. who are trained and free to walk the streets. Some of them brought back children who were born under ISIS rule in either Syria or Iraq. They’ll have more children in the U.K. There are 3500 terrorists the government is “watching.” The Didsbury mosque, where Manchester bomber Salman Abedi used to worship, condemned his attack, but it's been involved in raising money for groups associated with Al Qaeda.

It's happening at other mosques too, but Didsbury’s terrorism condemnation is all that will seep into the public consciousness, feeding the false narrative that the Muslim community mustn't be pressured to do more—that it's doing everything it can. It has a motivation to do more, given that it's blamed for every terror attack, but until it feels more pressure that won’t happen. All the pieces are now in place for Mayor Khan’s wish to come true about terrorism being seen as just another part of life in the U.K. As a Muslim, he has a much better idea than the average person what could be done to prevent such resignation, but he's not willing. The government, the media class, and the metropolitan elite lack the will too. They'll accept their fate passively, but they'll be exposed one day. Future generations will be hard pressed to not look back in anger.