Unless you’re willing to pay for it. 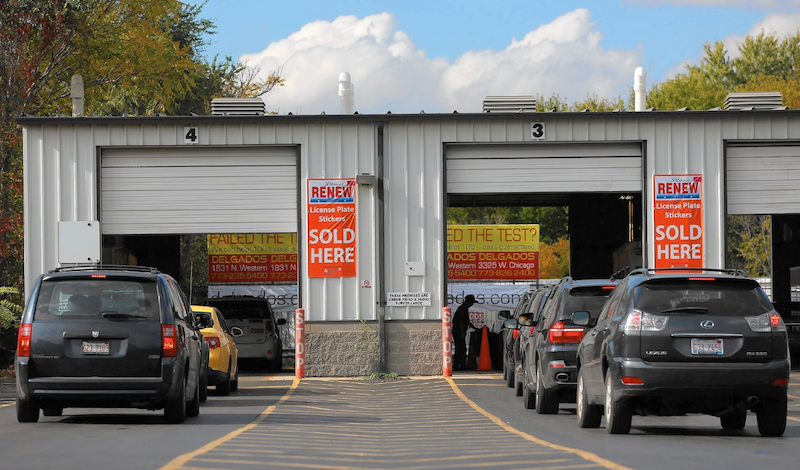 In the past, getting a renewal wasn't that big a deal. There were numerous test sites in the city. The state would send you a letter telling you it was time, and you'd take an hour out of your day and that was that.

Under Republican Governor Bruce Rauner, though, nothing in Illinois is easy. Rauner is determined to cut government services and crush unions; as a result, he's been unable to get a full budget through the Democratic legislature. Last year, the state stopped sending out renewal notices for license plates; you'd suddenly realize you were overdue when you got a ticket. This year they did manage to send out email notifications—but they've shut down most of the emissions sites in the city.

Thanks to the closures, getting my car tested turned into a comical time sink. I drove to a nearby site in Skokie—only to discover that it had been shut down. So I had to take another workday to drive to the next closest site, which was 40 minutes away. A 90-minute round trip for the privilege of paying a hundred bucks for a license renewal. At least, on this weekday, the line wasn't long. There have been reports of people on weekends waiting for hours.

This sort of thing makes you curse the state and all its functions. Someone demands you jump through hoops, and then cements over the hoop, so you jump and bash your head. It's why people hate government. The authorities makes demands and then prevent you from meeting them and punish you for not being able to do what they tell you. It's enraging.

The thought process is understandable. But in this case it's exactly backwards. Illinois government is unresponsive and crappy in large part because government has been gutted. Monitoring pollution levels is an important government function. A disproportionate percentage of toxic emissions are produced by a small number of cars, so emissions testing is a smart, effective way to identify those cars and make sure that the air is breathable. Having the state test emissions makes sense—unless you close all the testing centers.

Cutting government more, though, doesn't make anything better. Getting rid of testing centers makes it harder for people to get their cars tested—and eliminates a bunch of jobs. If Illinois got rid of the emissions testing requirement altogether, cities like Chicago would be smoggier, and people with asthma like my wife, son, and me would have more trouble breathing.