Buy the ticket and take the ride. 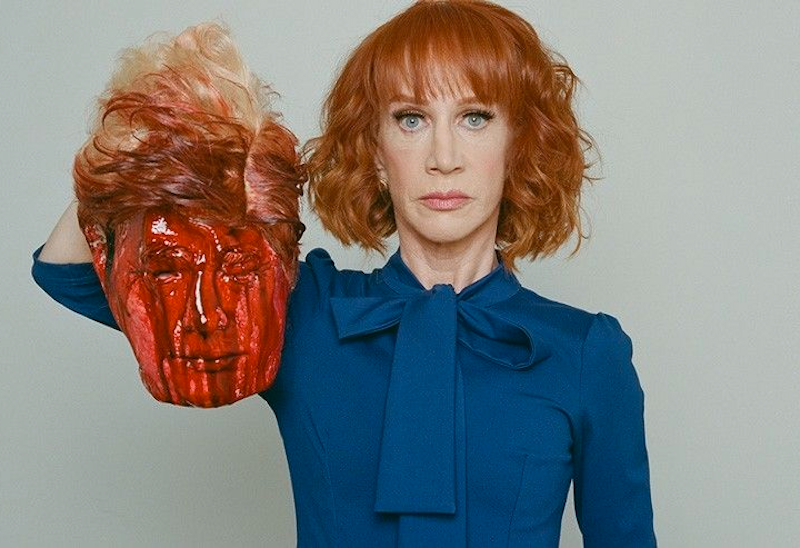 There was a time when rebellion meant hard work. Rebellion was the blood and sweat of the civil rights movement. It was the long, grueling arguments during Free Speech Movement at Berkeley. It was gays getting arrested at NIH to call for more AIDS funding. To Camus, it was a “Promethean struggle” against human nature.

Today, rebellion comes cheap, both on the left and on the right. On the left, all you have to do is exist as a minority, mix in some social justice rhetoric, and whammo, instant ersatz rebel. Kathy Griffin ignites a firestorm not for writing a challenging novel or creating a groundbreaking work of modern art, but for a cheap and easy stunt.

As social, racial, and economic barriers have fallen for minorities in America, taboos vanished, and Internet trolling becomes epidemic, rebelling increasingly becomes a matter of easy clicks and hunting chimeras. When the world is a good and accepting place, there’s not much left to fight for. As the recent leftist insanity on college campuses has shown, when the system isn’t rigged and problems are an individual’s fault, the easy way to call yourself the next Medgar Evers is to go after the local college president. But Evers was a World War II veteran who gave his life for civil rights. He didn’t just hold up a sign when Charles Murray spoke.

Conservatives are just as bad. Excited by the idea of being the next punk rock in the face of hegemonic liberalism, the right goes hunting through the fields of pop culture and the weeds of college activism to find the next Sauron to bravely take a stand against. As the targets get more pathetic, the rhetoric on the right grows more hysterical. Some pitiful social justice warrior throwing a fit gets half a million hits on YouTube, and conservatives, garbed in the virtue of rebellion, claim that in mocking this person they’re the ones taking on The Man. Alt-right personality Gavin McInnes has gotten so desperate to elicit outrage that he’s started criticizing people in wheelchairs who have the nerve to dance. Okay Gavin, you win. You’re a rebel.

Then there’s Stephen Miller, a writer for Heat Street, a Buzzfeed of the right. Miller got some press recently when he bought a ticket to an all-female screening on the new movie Wonder Woman. He got blasted on social media. His point, and it’s a good one, is that liberals have been citing law statutes and ignoring common sense for years, insisting that men can use women’s bathrooms and that any all-male gathering is a violation of the Constitution.

Miller’s making a point. And yet, he hasn’t owned his rebellion. Adopting the dishonorable tone of the just-citing-law left, on his Twitter feed Miller calmly explains that he simply wants to attend a “Chris Pine action movie.” Pine is the male supporting actor in Wonder Woman.

Miller needs to have some honor. He should talk to the media, which he’s refusing to do, and write a piece about why he went to the screening. Lying back smugly and not admitting the point you’re trying to make is weak. When Norman Mailer criticized feminists and invaded their houses, he had the balls to be filmed and stand up and say what he meant. Miller criticized Kathy Griffin for her recent stunt of holding up the head of a decapitated Donald Trump, but the thing that connects them is the ease and smugness of their acts.

It took James Joyce seven years to write Ulysses, the book that was banned in the United States and Britain when it was published in 1922. Before the cultural revolution of the 1960s, artists posing a challenge to social norms toiled to produce something that was arguably of equal value to the ideas they were usurping. Modernist painters could only break rules because they were so steeped in knowledge of the masters. Marlon Brando revolutionized acting by infusing it with animal energy that was revolutionary, but to prepare for that moment he studied at the American Theatre Wing Professional School, part of the Dramatic Workshop of the New School, with influential German director Erwin Piscator.

Ulysses was scandalous because of its frank sexuality, but the scenes in question are entangled in metaphor, wordplay, and stream of consciousness. Joyce had sweated to produce this “dirty” book. Americans John Sumner and Anthony Comstock tried to ban it. In the UK, Sir Archibald Bodkin tried to burn all copies and to ban importation of additional ones. Battling eye disease, poverty, and rejection by his own people, Joyce was backed by Sylvia Beach, the Paris publisher who first issued Ulysses and risked her own reputation.

Faced with an all-female Wonder Woman screening, Joyce would most likely have just let the ladies have their party. He had the self-respect to want the “Promethean struggle" of genuine rebellion.