Amazon, Spotify, and the Future of the Arts

None of these companies or stakeholders have each other's best interests at heart. 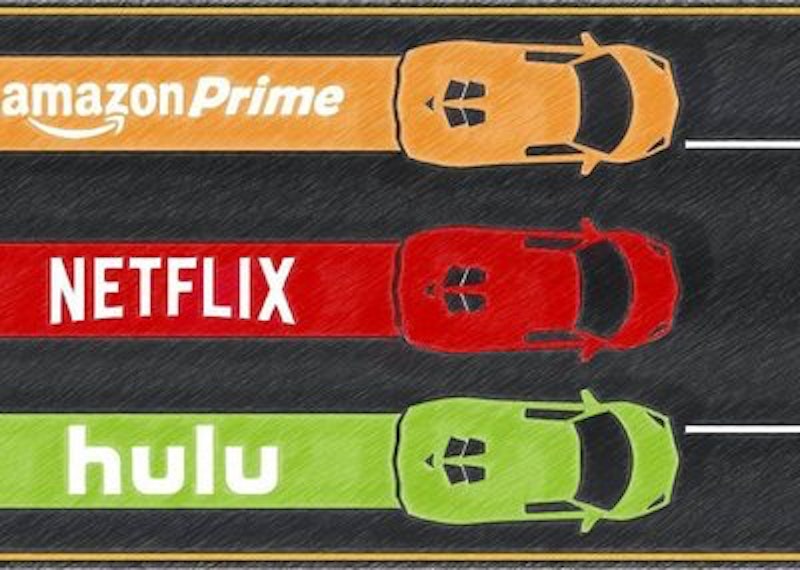 Here's a prediction: several years from now, you’ll start to see business articles about HBO and Showtime programming "in crisis." In these articles, the primary target will be Netflix, although that will be obfuscated by references to Hulu, Amazon Prime Video, and Sling. These articles will explain that consumers are opting out of cable services, decimating subscription rates for premium channels like HBO. Although HBO will continue offering a streaming subscription to its own library, Netflix will be blamed for pricing its streaming collection too low. With consumers ignoring new premium content in favor of whatever they can find on Netflix, HBO will complain that it can no longer afford to invest in innovative programming. The result, according to these articles, will be an entire creative industry on the verge of collapse—unless "all you want to see is what Netflix decides you should watch."

These articles will cite, in incredible detail, the cost of producing a show like Game of Thrones, and then they'll quote cable executives saying something like this: "There's no business model in the world where the costs of bringing shows like Game of Thrones to the small screen are offset by the royalties Netflix currently pays." If you care about quality television, in other words, it will be time to worry. A lot.

This is speculative, but premium cable is living large right now. A lot of consumers are still maintaining expensive cable subscriptions as part of their telecommunications bundles, which attach themselves like barnacles after the new subscriber promotions run out. After making that money, the cable channels get extra revenue from streaming royalties (e.g. from Netflix) as well as from a la carte subscribers (to services like HBO Now). Then they get paid again when consumers purchase individual shows, usually by the season, on Blu-Ray or iTunes. Basic cable channels are doing the same thing: just replace that first round of subscriber fees with advertising revenue. I have paid for a show I own on DVD, could’ve watched on live TV, and can now stream—John From Cincinnati, say—something like four times over. The overcharging is precisely why so many great new shows are coming out right now.

Something has to give, and it will. Consumers will find workarounds to avoid paying for cable. As ownership becomes less important, since you'll be able to stream anything at any time, consumers will stop buying DVDs. iTunes sales will likewise slow. Companies with one or two shows to offer (like Showtime, which is putting all its money on Twin Peaks and Billions) won't get enough people signing up for a la carte streaming. Consumers will start paying once, and only once, for a show—either indirectly, when their streaming service pays in royalties, or else directly, when they add something to their digital collection. This will, in countless articles, be decried as the end of television as we know it.

This matters already, right now, because it's happening in the world of music and books. We’re currently in our sixth year of articles about the dangers that Spotify (and Apple Music, Pandora, etc.) pose to musicians and songwriters. Most of these articles portray Spotify as a ruthless profiteer, forcing bad deals on beleaguered labels and encouraging a dangerous sense of "entitlement" in listeners who expect to stream everything "for free." Listeners should support the music they love, is the implication, but Spotify is letting them off the hook.

Interestingly, other articles take the opposite approach. In these pieces, Spotify is the victim. As a company that has yet to turn a profit, Spotify is already paying artists and labels the most it can afford, while simultaneously helping to curb the epidemic of piracy. What more could anyone ask of them? In these articles, the sides are reversed, but the frame is the same: it’s Ragnarok, folks! Art will never recover!

An identical dynamic runs through coverage of Amazon's battles with publishers. In every instance, "the future of the book" is at stake. A few years back, these articles were about the big chains—Borders, Barnes & Noble, and Amazon—putting smaller, independent bookstores and record stores out of business. Then came the e-book battles. Publishers complained that Amazon and Apple wanted to sell e-books for a pittance. Then they colluded with Amazon and Apple to keep e-book prices artificially high. When an antitrust lawsuit ended those sweet deals, Amazon and the publishers went to war. Author John Green went on record saying, "What's at stake is whether Amazon is going to be able to freely and permanently bully publishers into nonexistence.” [http://www.latimes.com/books/jacketcopy/la-et-jc-amazon-and-hachette-explained-20140602-story.html]. That was in 2014. Now, three years later, Amazon is "stepping up" its "battle with the book industry" by allowing third-parties to sell books via 1-click, including remaindered books, damaged books, and (perhaps) pirated books (this according to the publishing houses). If you believe articles like this one in The New Republic, these changes on Amazon.com pose "an existential threat" to publishing's very existence.” We have come full-circle. Now small businesses, working in partnership with Amazon, are the enemy, even though these same used booksellers were once portrayed as underdogs being crushed by Amazon's implacable reach. Where does the truth lie?

Well, none of these companies or stakeholders have each other's best interests at heart. Amazon isn't trying to bolster American publishing. The average college student isn't trying to keep Nashville's songwriting corps going strong. iTunes is not an official sponsor of innovative teleplays for teenage soaps. Used bookstores don't pay J. K. Rowling's book advances. All the different links in the chain of industry stretching from artist to consumer are self-interested, for-profit entities, and exist in a state of perpetual war against each other. It is short-sighted and misleading to portray them as grand figures in a war of good against evil, creativity against corporate greed. This has become our national version of a shell game, where we keep the concerned citizen looking at all the mergers, court decisions, dollar totals, and talking heads, while missing the fundamental point, which is what we should collectively do.

The neglected truth is that if we want to encourage American arts and letters, somebody other than Amazon.com is going to have to buy in. The bill comes due to us, payable by all. We lag far behind countries like Canada and England when it comes to public investment in the arts. Our public libraries are in poor shape. Our undergraduates in the humanities cannot afford their college loans. Thanks to Trump’s FCC, net neutrality and free access to information are under threat, putting any number of innovative projects for digital media distribution at risk. If we want songwriters, authors, and performers to flourish, we have to supplement the free market with subsidies for the arts, just like we do with agriculture. We must also treat access to digital information as a protected public good.

For now, dramatic articles about Spotify versus songwriters or Amazon versus Hachette are nothing but pernicious sideshows, and miss the point. None of these companies or professional associations, by themselves, can be entrusted with the preservation of the arts. Until we seek a political solution, it's like that old tagline for Alien vs. Predator: whoever wins, we lose.