It’s time for Democrats to step into the Octagon. 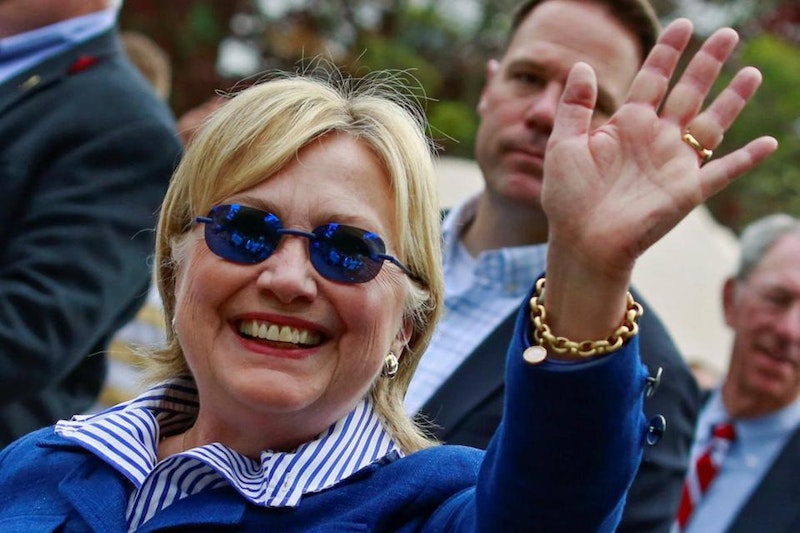 Will the DNC ever win another election? If Hillary Clinton is the nominee in 2020, I’m voting for Daffy Duck. Drudge ran a picture yesterday of Clinton wearing her Zeiss Z1 seizure glasses at a Memorial Day parade with the caption “2020 VISION”—no one on the left has the same kind of dark and nihilistic sense of humor that Drudge does. Chapo Trap House and the growing contingent of young Democratic Socialists do, but the DNC won’t touch them. Onward Together, rearranging deck chairs. Their bench is bare, so duds like Cory Booker get floated early, and we get to enjoy his overeager nonsense: “I called Donald Trump a liar on national TV, and when I got off TV, I felt bad, because it violated my values…  I can say he was lying, which is the right thing to do, because he did lie, and he does lie quite often. But I didn’t like to be crossing a line and condemning his soul.” No one cares about his soul, dude. You sound like a limp, prevaricating brown-noser, the perfect foil for alpha toad Donald Trump.

Another losing move: wasting time pointing out hypocrisy and double standards in the free-wheeling magical mystery tour of Trump’s mind and mouth. Newsweek reported that half of Trump’s Twitter followers are fake. Awesome. He’s still president. Of course he’s going to decry anonymous sources when they’re biting him in the butt, and of course he’s going to pump anonymously sourced stories that favor him. It’s been a year and a half since Trump said he could shoot someone on 5th Ave. and not lose any votes. He was right. The guy that said “grab them by the pussy” while trying to impress Billy Bush beat a former Senator and Secretary of State. Blackmail and blatant hypocrisy are only effective if the subject has shame. Trump has none, and neither does Mitch McConnell. Build your own argument and stop believing that dismantling the dadaist Trump platform is going to get you anywhere. I know you hate Bernie Sanders, but maybe take some cues from the septuagenarian socialist Jew who came within striking distance of beating Clinton last year. Talk about minimum wage and single payer. I think there’s something there.

Elizabeth Warren is right, and so was Mr. Bodyslam in Montana. Warren started calling Trump a “loser” in March 2016, and she got flack for it. Of course Greg Gianforte won, it was good for his brand! Americans love violence, and many Americans hate the media. As soon as Gianforte choked Ben Jacobs and threw him to the ground, I knew the election was over, and I made decent ($20) money on it. I’m not suggesting Warren needs to get in the ring and choke-slam Tulsi Gabbard, but all of this morality bullshit is ancient. America wants to see someone call Trump a motherfucker to his face. If Jeb Bush had told Trump to go fuck himself in one of those early debates, he might be the president right now. Hillary played it safe, and cretins like Booker think they can win over a fractured coalition of rose emoji DSA kids and Rust Belt Reagan Republicans with this “I shouldn’t have called him a liar” bullshit? Do us all a favor and jump into another burning building, maybe something taller this time.

Then there’s a whole other chorus of idiots in Hollywood and in the media glomming onto the #Resistance for cheap publicity stunts. Kathy Griffin is the latest in line, holding Trump’s severed head for TMZ, posing stone-faced like Sinead O’Connor ripping up a picture of the Pope on SNL. Eve Peyser wrote a great piece for VICE yesterday about how “Hollywood Still Has No Idea How to Resist Trump.” She writes that Griffin’s photoshoot was “typical of Hollywood ‘activism’—ignorant, misguided political statements that generate more publicity for the celebrities speaking out than whatever noble cause they're supposedly fighting for. Whether it's Chelsea Handler opining on the virtues of a Mike Pence presidency or Lena Dunham's painfully bad resistance poem, anti-Trump celebrities have a bad habit of reminding us that conservatives aren't wrong about Hollywood elites being out of touch with the American people.”

On the same tip, maybe some people found some comfort in Kate McKinnon’s embarrassing and histrionic post-election performance of “Hallelujah,” but I’m sure many millions more were confused at such a bizarre overreaction. This wasn’t 9/11: it was an election. So whom will Kate McKinnon, Lady Gaga, Katy Perry, Lena Dunham, and Chelsea Handler stump for in 2020? It’s gotta be Warren. She’s the only prospective candidate I’d even consider. Although I admit Hillary has cooler glasses. I wonder if they’re still looking for body doubles—tell me the resemblance isn’t uncanny, and I’ll buy you some coke.