A Key Factor to Watch for in the Second GOP Debate

How much holding still is there? 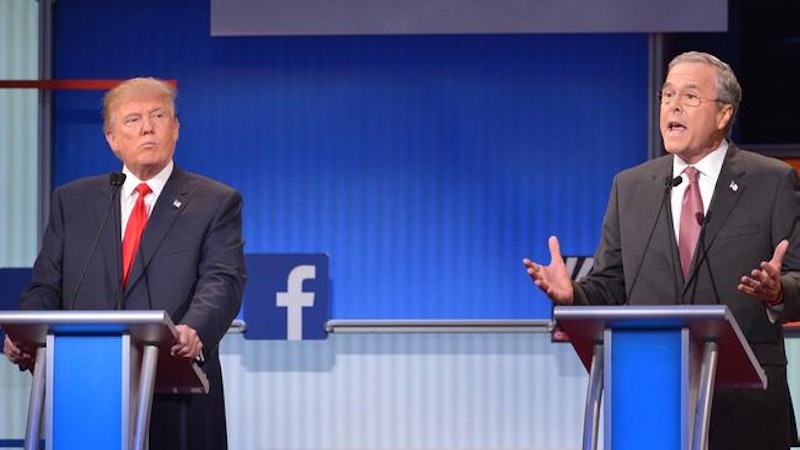 The second GOP debate is upon us. Let's remember that, among other things, a debate is when the candidates stand next to each other. Last time the stage placement, all based on polls, had Scott Walker and Jeb Bush standing next to Donald Trump. Walker and Bush have done badly since; they're snakebit. Of the other men on stage, Marco Rubio and John Kasich did all right as far as press notices go, and Ted Cruz did himself no harm; they were all placed several spaces away from Trump. I think life is freer out there. Closer to Trump, life is more like a campsite where a grizzly just showed up. Walker managed to take part in an entire presidential debate while holding very still. It was like watching a kid on the playground, his eyes going sideways to the bully.

Jeb was standing on Trump's other side, and now people are laughing at him and making fun. In Jeb's case, active and unrelenting hostility from Trump has been a powerful factor in the poor man's skid. But I think the whammy was on Bush anyway. He'd been holding still too, and he's bigger than Walker, which makes his case worse. As a posture, holding still is too close to a cringe. The person may not be folding up, but he's withdrawing from his own space. It's the sort of thing people do before they fold, and meanwhile his space isn't getting filled out the way it should. People's nerves get worked on, especially if it's a big guy—there's more cringe, or semi-cringe, and a man with those shoulders ought to look the world in the eye. That's Jeb. Add in other defects: his hanging lip, his suburban dad hair and glasses, the softness of his bulk, his resemblance to a hamster and a hamburger. There's his name too. Of course. All in all, when Trump mistreats Jeb, he's doing something that a lot of people like watching.

A lot of the Fox-Regnery-Republican audience would love to de-pants the party leadership. They want to make Walker and Jeb and everybody all wet themselves like playground victims. For this slice of the market, Trump is living the dream. The summer has been so scary for the GOP because the slice keeps proving bigger than anybody thought. Trump is now above 30 percent in polls, and half the party says that immigration—his issue—is an issue that's going to be very big in deciding their vote. That's up 12 points since Trump entered the race, and among these voters he has a double-digit lead. My guess is that some of those 12 points come from people who sense that a leadership pantsing is on the way. The pantsing can happen once everybody on the playground throws in together, and one way of throwing in is to get on the same side regarding immigration. That side would be Trump's, naturally.

Yes, Trump is good at scaring people, so maybe some of the converts are scared about immigrants when they didn't use to be. But Trump's top gift is for pushing people around and acting like it was God's rough justice. He looks like he can and will beat nuisances and creeps straight into the ground. He talks that way too. I think people who flock to him want to see the strong man show how good it is to have strength, and to them that means crumpling somebody, most notably the played-out Reagan epigones who nag the base at election time but never deliver.

Anyway, the second debate. Some of the candidates will fight back. Carly Fiorina will do well, even though Trump will give her a mouth-spray about her mishaps at Hewlett-Packard. The men will have it still tougher. Jeb is going to cry on camera, or somebody, some candidate-stiff with a red tie, is going to have a wobble in his voice right when he shouldn't. Trump, over at his podium, is going to glance the poor sap's way and lift the corner of his lip. The other guy will hold still. Everybody will see it, and the moment will play on YouTube. Trump's base will love it, and so his campaign will move forward.