The quiet doctor from far away scores points with Christians. 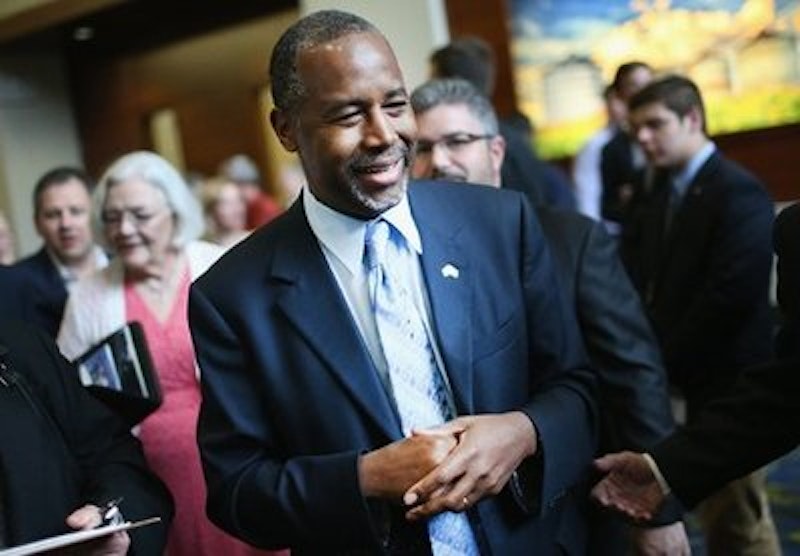 Donald Trump said Ben Carson was “heavy into the world of abortion,” which has a Jack Webb feel to it. The full effect would call for an electric organ and some underexposed footage of young people frugging next to a light show. But phrasing aside, Trump meant Dr. Carson was pro-abortion. Trump was going for the jugular.

This was on CNN's New Day, which is very early in the morning. Trump was revved up and ready to go. Presumably, he'd been turning over what Carson had said about him the day before, the fateful remarks made by the doctor at an appearance in Anaheim. Somebody in the crowd had asked Carson what made him different from Trump. “I’ve realized where my success has come from, and I don’t in any way deny my faith in God,” Carson said.

It does have a catty sound. Trump raised his great shovel hands and attempted to swat the cat. The man who put investigators on President Obama (that birth certificate) knew just what to say about the dignified, soft-spoken, highly accomplished, rather unearthly brain surgeon. “If you look at his past, which I've done,” Trump told New Day, and he was off and running. The full quote: “If you look at his past, which I've done, he wasn't a big man of faith. All of a sudden he's becoming this man of faith, and he was heavy into the world of abortion.” There was plenty more.

This strikes me as an animal reaction. Carson is rising in the polls and he stepped on Trump's tail. So Trump attacks, and does it in the same way he has always done it. He's snotty about his victim's personality and he unloads dark talk about the wretched, shoddy things the target has been doing in the big world. For the governors and executives, this dark talk can take the form of “lotsa problems” (pronounced more like “LAWTT-sah prawblemmmz,” with a good deal of satisfaction packed into the trail of m's), accompanied by prominent mention of bad headlines the target has accumulated. “I don't know if you've been reading about Wisconsin, but they got lotsa problems,” and so on. When the headlines aren't enough, Trump is just amazed by what he's hearing. People are telling him things. It's incredible what they're saying. For instance, apparently, that Carson was “heavy into the world of abortion” and didn't dig your fertility trip, man.

The attack seems like a dumb thing for Trump to do. Of course, so have other things that he's done in the past few months. Each time smart people predicted disaster, and each time he came out ahead. Even so, I think this time he said a dumb thing that will cost him sooner rather than later. Because Carson is a new sort of target in the Trump shooting spree. There is no establishment behind Carson: not Washington, not Fox, not the Koch brothers. He counts in the GOP only because a lot of our right-wing citizens have decided that they love him. When you attack Carson, you attack nothing except the man and the God who made him, and the people who have decided that their love for this man is something precious. Good luck, but possibly that's a fight to avoid.

Finally! Trump may have felt pleased with himself. Carson, that menace in the polls, had finally given him the go-ahead to start punching. Trump plays that game. If an opponent is doing well, Trump wants to attack. But he won't unless he can pretend the opponent mistreated him somehow. Trump said as much before launching into poor Scott Walker, who was high in the polls back then and whose fund-raiser had called Trump something mean in an email. “Finally I can attack!” Trump shouted in front of a crowd.

Now it's Carson's turn, and I think Trump is overmatched. A reporter wanted to know what Carson had to say about Trump's mean remarks. Carson patted the issue on the head and sent it away. “Everyone is going to be saying, ‘Oh there’s a big fight, everyone come watch the fight,'” he said. “But it's just not going to be as great as they think, because I’m not going to participate.” GOP candidates like to say the media is trying to get them to fight. Carson's remark is the best rendition I know of this theme. He doesn't sound like a finger pointer, he sounds like somebody drawing a line for the good of his soul. His soul's freedom will get compromised if he walks into the silly production people have rigged up for him. So he doesn't.

Carson even apologized. “There is no reason ever to question anybody’s faith. That’s something between them and God,” he said. He also said he'd been misinterpreted, which presumably means he didn't question Trump's faith. But the apology stayed out there. “When you do something that's inappropriate, I think it's appropriate to apologize for it,” he said.  He acted like the whole thing was... not a crisis. It mattered, because correct behavior matters, but one does the right thing and then moves on.

Odd disappearance. Abortion vanished out of the exchange. After Trump brought it up, everybody let it drop. I guess the media figured that Trump and Carson slanging each would be enough of a story, and who needs the TNT of abortion banging about? A reporter could use the wrong phrase and get tweeted to death. Trump also seems to have let the matter go. When last seen he was still throwing words at Carson, but abortion wasn't among them. The big man stuck to energy level. Possibly he senses that it's best to disengage and is struggling toward that goal.

I suspect Carson has done well out of his little collision with Trump. Born-agains like what Carson has to say; now they've seen him walk the walk in dramatic fashion (because everything set off by Donald Trump is dramatic). Meanwhile, Trump has run up against that rare thing, a man who can rise above a fight without seeming scared. I think one reason Carson can pull this off is that he's black and the audience is white. But he uses the opportunity well. As far as I can see, he just got the best of Donald Trump.