Political insults are in flux. 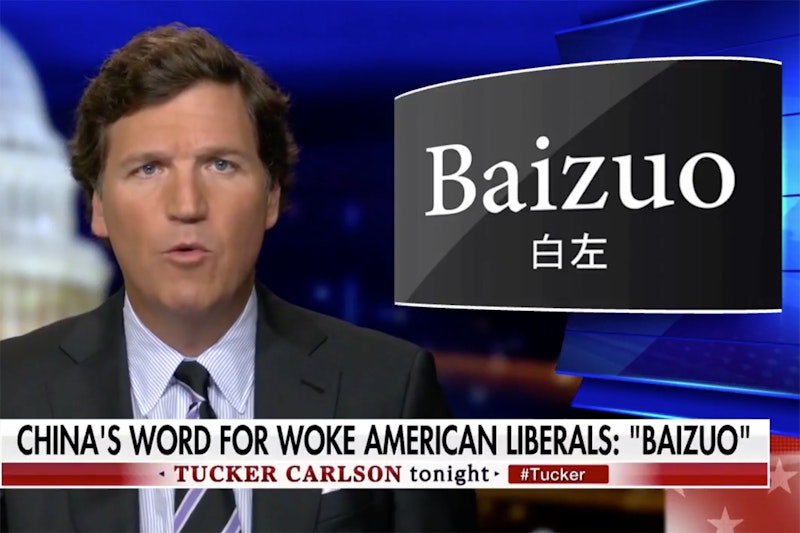 Political insults can become badges of honor. The Erie Canal, championed by New York Gov. DeWitt Clinton, once was mocked as “Clinton’s Ditch.” Now you can find that label on a monument celebrating the canal (albeit with a graffitist’s touch of penciling the D into a B).

I thought about that recently when I encountered “baizuo.” This came about because Splice Today’s proprietor tweeted that Rod Dreher is “nutty,” which inspired me to a search that found a 2021 Dreher essay praising Putin for his opposition to the “baizuocracy.” It turned out that “baizuo,” literally “white left,” is a Chinese pejorative term roughly equal to how “woke” has come to be used in America; and that Tucker Carlson popularized it in American right-wing circles, with Dreher’s modification underscoring the progressive enemy’s empowerment.

Related terms, I learned, are “huangzuo” and “shengmubiao.” The former is “yellow left,” a negative term for Chinese who embrace Western liberal or progressive ideas; the latter is “holy mother bitch,” which adds a misogynistic spin. I don’t know if any of these terms will end up embraced by those they’re meant to offend. “Yes, I am shengmubiao!” is something I can imagine Elizabeth Warren saying, and I’d applaud her. For my part, I may never be a full-fledged baizuo, but I’m definitely anti-anti-baizuocrat.

Language is in flux in the 2020s, and so are maps. Putin miscalculated in his belief that he could readily transform Ukraine into a literal or de facto region of Greater Russia. Now, his military’s underperformance reminds me of something I read a decade ago in The World in 2050, a book by geographer and Earth scientist Laurence C. Smith. In a section titled “Dragon Swallows Bear,” Smith wrote that the Russian Far East, with its sparse population and vast resources, would increasingly come under China’s influence; and that “the far-out possibility of military seizure or outright sale—as Russia did long ago with nearby Alaska—cannot be ruled out.”

Japan has taken the current moment to affirm its claim to the southern Kurile Islands, seized by the Soviet Union at the end of World War II; Tokyo had been reluctant to press this point. Meanwhile, in South Korea, the election of Yoon Suk Yeol as president signals a harder line against North Korea and China. Yoon also proposes to dismantle his country’s Ministry of Gender Equality, which likely will win him applause from Dreher and Carlson, as they seek new anti-baizuocracy camaraderie to replace their now-untenable slobbering over Putin.

After returning from our recent trip to Texas, we had dinner at a New Jersey diner and listened to people at a neighboring table chortle about “Let’s go, Brandon,” a phrase new to some of them. I don’t know if the Chinese Internet has already coined the term, but I propose “baiyou,” or “white right,” to denote Americans holding a particular, insular worldview, one marked by contempt for everything cosmopolitan and rationalistic. Brooklyn may be loaded with baizuo, but the North Jersey suburbs have many baiyou, and tables turn fast in the insult game.