A History Lesson for Republicans 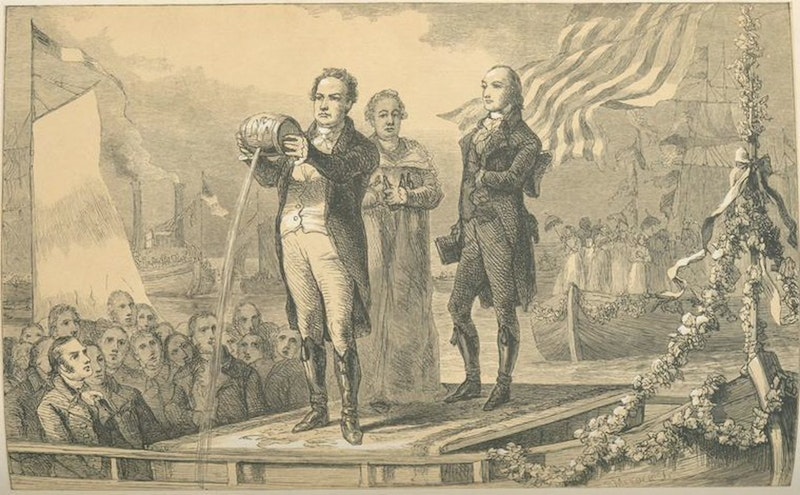 The Republican National Committee’s censure of Liz Cheney and Adam Kinzinger for their work on the January 6 committee reminded me of political events from two centuries ago. In 1824, the New York State Legislature voted to remove DeWitt Clinton, the state’s former governor (and an ancestor of my wife and son), from the one political position he then held: member of a commission that had planned and was overseeing the building of the Erie Canal. Clinton had long served on this commission, an unpaid post, and his advocacy of a canal had propelled his election as governor in 1817.

Clinton was at odds with his party, the Democratic-Republicans (increasingly known by the name they hold today, the Democrats). He’d been distrusted by his colleagues since running against incumbent President James Madison in 1812. Clinton retained ambitions to be president, as did his rival, Sen. Martin Van Buren (who later succeeded). Van Buren was leader of a Democratic faction known as the Bucktails, who had joined the canal cause as its popularity grew and now sought to detach Clinton from his signature issue.

After an effort to unseat Clinton in the 1820 election fell short, the Bucktails pushed for a state constitutional convention, which was held the following year. Its provisions included an amendment shortening the governor’s term, such that Clinton had to leave office at the end of 1822. The Bucktails had beaten their nemesis, but a couple of years later, they overreached.

Their bill to remove Clinton from the Canal Commission began as a bargaining chip but ended up passing both houses of the State Legislature. Van Buren, a savvy politician known as the “Little Magician,” was in Washington, unaware of his Albany faction’s move until too late. He was alarmed it would create sympathy for Clinton, suggesting ingratitude for his canal work.

Public indignation soon followed. One newspaper, the New-York American, editorialized about the removal that “a littler act of little minds, a more contemptible exhibition of impotent malice, was never recorded in any legislative annals.” Van Buren fired off an irritated letter to Judge Roger Skinner, his fellow Bucktail who’d plotted the maneuver, which said: “I hope, Judge, that you are now satisfied that there is such a thing in politics as killing a man too dead.”

Outrage at Clinton’s treatment enabled his return to electoral politics. That fall, he ran for governor, backed by a faction known as the People’s Party. Clinton defeated the Bucktail candidate and was back in office in 1825 as the canal was completed and celebrated. Evan Cornog, a modern biographer of Clinton, points out that some consequences of the move against him were long-term, such as that William Seward, then a young lawyer, left the Democratic Party and went onto a high-flying political career as a Whig and later a Republican.

This history might’ve held a lesson for today’s Republicans about the backlash that can arise from measures seen as excessive or unwarranted. Before the censure, Cheney already faced a primary challenge, and Kinzinger had announced his retirement. An AP-NORC poll in January found that 71 percent think Congress should continue its investigation, including 96 percent of Democrats, 71 percent of independents and a not-insignificant 41 percent of Republicans. The censure’s wording that the January 6 committee’s targets were engaged in “legitimate political discourse” brought pushback including from within the GOP.

If, as some believe, Donald Trump’s hold on the Republican Party is weakening, it’s an open question whether the post-Trump party will be directed by leaders closely associated with the ex-President, or ones who’ve kept some distance, or perhaps even an anti-Trump figure. If there’s someday a President Liz Cheney, the ill-considered censure will have helped make it happen.