“Ammo, Not a Ride” Does a Fade

The day after a wonderful quote. 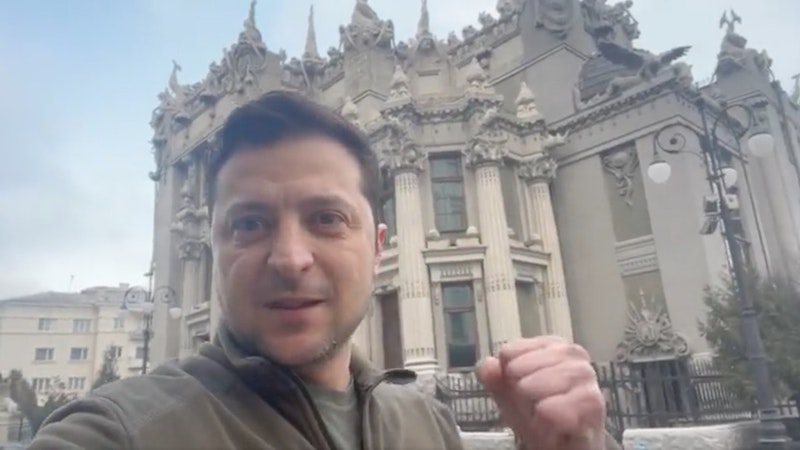 Looking quick through Google, it appears “I need ammunition, not a ride” stopped featuring in media stories shortly after March began (the phrase still hangs on atop merchandise). As the mentions trail off, we find this from The Washington Post’s Glenn Kessler: “Zelensky’s Famous Quote of ‘Need Ammo, Not a Ride’ Not Easily Confirmed.” The article tells us, “Serhiy Nykyforov, Zelensky’s press secretary, told The Fact Checker that he could not confirm whether the president had uttered the famous line or was asked to leave the capital by the Americans.” On the American side: “Administration officials expressed confusion about the claim to The Fact Checker—they deny Zelensky was asked to leave Kyiv by the U.S. government—and said they do not know what call the AP is citing.”

In support of the phantom quote, we have the man who reported it, James LaPorta of the Associated Press. He says: “I can understand why they have been denying it. It makes them look bad.” LaPorta means U.S. officials, possibly with Mr. Nykyforov chiming in to help them. I suppose we have to use our judgment here. How bad is the p.r. from a rejected plane ride? Not that bad, I’d think. At any rate, there’s no mention of the offer anywhere but the same brief LaPorta item with its celebrated line. And, as noted, news stories don’t seem to be quoting that line anymore.

The Post article appeared March 6. I’m happy to say I called the quote’s dubiousness back on March 1 (“Hope But Verify”). But I had no doubts about the plane ride. The AP said the offer had been made; all right, the offer had been made. I felt this way even though I’d Googled the ride offer and found nothing beyond the AP item itself. I know my Google skills. Someone who functions normally might find what I couldn’t… and there my thoughts left things. Too bad, since it’s obvious that the offer, if known to the AP, would get mentioned in various AP round-ups of events. It wasn’t, and I might’ve called out the ride offer and been a savvy news-following sage and wizard. You’ll see from the opening of this piece that I’m now trying to be more confident about Google. So maybe next time.

I do claim an Orwell Prize, because I looked past something I found appealing and checked its truthfulness. But I’ve got plenty of those. I wanted to be a savvy wizard.

What embarrassment? “Ammo, not a ride” is a movie line, so imagine the scene and how it might go. If the person making the offer can be put off with a line, then that person isn’t bringing the hammer. They’re offering, that’s all. Maybe they’re squishy and irresolute (a woman, some British guy). Maybe they’re unhappily complying with exigencies that require hard-eyed recognition (Billy Bob Thornton or, by this point, possibly George Clooney). Either way, they’re there to point up the hero and how great he is, so they have to be the doofus and offer this plane ride that gets swatted away. But they’re not there to oppose him or denigrate him. They’re the well-meaning stooge, a role that can be afforded some dignity when the tellers want it that way. Accordingly, I don’t think Mr. LaPorta’s right about those administration officials.