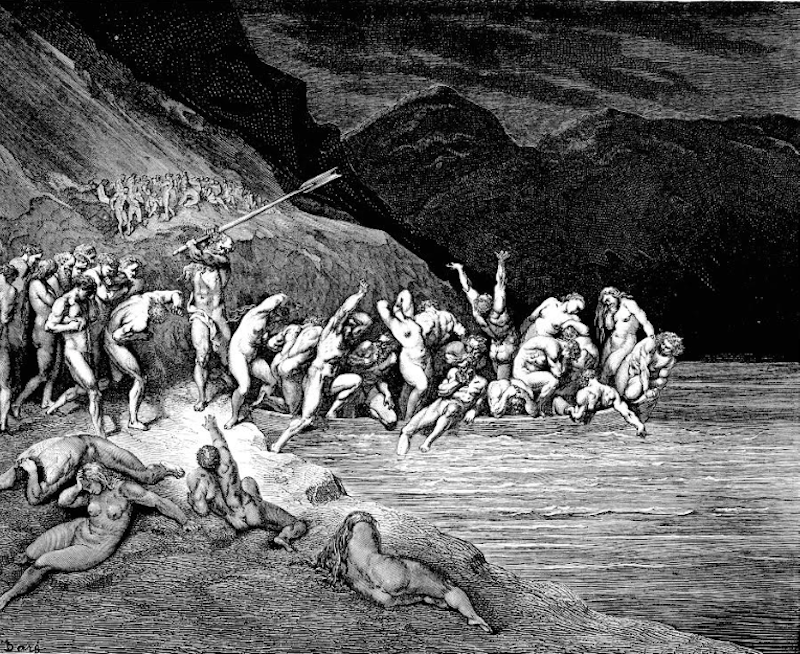 Americans are always ready to act; eager to solve problems we see in front of us. And we don’t just wait for institutions to act on our behalf. We’ll take matters into our own hands. Who needs permission to do the right thing? Find me a cause worth supporting, and I’ll find you a bake sale raising money for it. It’s one of the best things about our country, and one of the easiest aspects to weaponize.

If you genuinely care about something and are honest about your own abilities, you’re not going to make it about you. Anyone who has something at stake doesn’t need to change their Facebook avatar, incessantly share hashtags about their boutique issue, or mount campaigns to get people shamed and fired from their jobs. If it’s real, it’s not about the brand.

The discourse about the war in Ukraine illustrates these facts perfectly. I’m Ukrainian on one side of my family, who came to the U.S. as refugees after WWII. I have extended family who’ve had to evacuate since the Russian invasion, have grown up connected to the diaspora and can’t deny my own emotional and sentimental attachment. As I’ve said elsewhere, I want the Russian military mission to fail, for Ukraine to be a functioning and prosperous country, and for the troubled history to remain history. Ideally, Russia and Ukraine would operate as Germany and Austria do today, two ethnically similar and historically-connected countries that are nevertheless governed from their own capitals.

Everything about social media hysteria makes this possibility harder to achieve. The Ukraine discussion in the West reflects and influences the political imperatives and economic incentives around the conflict itself. Just like with the Trump presidency, Covid-19 and other events of the last decade, we have an entire class of people acting like Charles Dickens’ Mrs. Jellyby character in Bleak House, obsessed with the plight of a distant people but negligent about the needs of her own family and community. I imagine her home, dilapidated due to her dedication to “telescopic philanthropy,” as the spiritual ancestor of modern NGOs.

Think about what this do-gooder delusion motivates in people. They mount social media campaigns to get transgressors fired. They share pictures of them, harass their family, share their address, and send death threats. And for what? Do you really think the expressed opinion of one restaurant worker will alter the events in Ukraine? Did the skepticism of one bank teller affect the spread of Covid? Was the concern of one grandparent about the 2020 riots enough to make incidents of police brutality go up? No.

It's the same people activating their sick narcissistic impulses over and over again. The Russian involvement allows them to redirect their worn-out Covid hysteria and reanimate their flaccid fantasies of Trump’s 2016 collusion or his first impeachment trial. At the lowest level, we see the absurd spectacle of discarded bottles of Russian vodka (the distributor already paid for it, you idiots), vandalizing Russian establishments, and non-Ukrainians lecturing people online about the proper spelling of Ukrainian cities. The very people who know the least about Russia and Ukraine now insist on being the loudest voices on Russia and Ukraine.

Worse, we see cultural institutions dismissing Russian performers or canceling their events out of a perceived need for “sensitivity during this difficult time.” The cancellation of Alexander Malofeev’s performance in Montreal is outrageous. He’s 20! He spoke out against the war! And even if he didn’t, what would that change on the ground in Ukraine? A Ukrainian sitting in his T-72 isn’t going to suddenly fire at the right tank because a Welsh orchestra canceled the “1812 Overture.” None of this follows any practical sense, only the logic of performative “brand values.”

Likewise, the European Union and many tech platforms made a stupid mistake by banning or blocking Russian media outlets. It’s obnoxious on purely free-speech grounds, flying in the face of any “Western values” we claim to defend. It’s no better than the Russian government’s crackdown on dissent and protest, or the pressuring of outlets like Echo Moscovy. Additionally, it robs us of the ability to easily see what the Russian people are told, which could be helpful for an informed diplomacy in the future. If you need to ban the opposition, it just makes you look weak.

At the highest level, it’s a chance for dreadful neocons to launder their reputations one last time. “See what happens when we embrace isolationism, retreat from the world stage, or cede American leadership!” All euphemisms that serve to legitimate American militarism. Our own military has rightly stated that a no-fly zone or shipments of jets wouldn’t have a practical significance due to Russia’s robust missile and artillery capabilities. The only way to affect that would be to become a party in the conflict. This creates a discursive environment that’s hostile to diplomacy and negotiations, and primes people for continuing the conflict.

A lot of very sick people never wanted Covid to end, as it provided them with limitless raw material to build the virtues of their personal brands and use them against their enemies. Likewise, a lot of these upper-middle class liberals and #NeverTrump conservatives want this conflict to go on and escalate, even if it means turning Ukraine into a wasteland. The more tragedies occur, the more opportunities to express sympathy, solidarity and outrage. I hate that it involves something I care about. I want Ukraine to get as much aid as possible. I don’t want the blue and the yellow to become a social bludgeon.

There’s another force at play that’s worth examining. The discourse isn’t a one-way conversation, as there’s another set of people building their brands: the dissidents and self-appointed truth-tellers. The skepticism and criticism of woke insanity, ant-Trump hysteria and draconian Covid measures has led some people to reflexively oppose almost anything that happens to benefit the professional class, the West, or any other avatar for the establishment. This is a real temptation and I sympathize. It’s a good impulse to have that makes you stop and think. But on the Ukraine issue specifically, it’s shown a tendency to run off its own rails.

It’s true that the Western media is hypocritical in its coverage of Ukraine’s Azov Battalion and other radical groups’ involvement in Ukrainian politics. But it’s another to smear the entire country and its military as fascists, or make it the basis for the country to lose its statehood. And whatever your thoughts about the Maidan revolution, Ukraine has had two presidents elected since then, and Russia’s signature on the 2015 Minsk Agreement signifies a recognition of legitimacy of the Ukrainian government. Between February 2014 and Poroshenko’s election, the cries of “But what about the coup? Ukraine is run by a junta!” may have had some weight, but that time has passed.

Some commentators cast Russia as the victim in this scenario. This strikes me as the mirror image of woke idiots who cast straight white men as the only ones with agency who actand assert their will in the world—and everyone else as victims who are merely acted on. This was a policy decision made by Russia’s leaders. NATO has acted recklessly and failed to recognize Russia’s legitimate security interests. But Russia already skillfully asserted itself with the annexation of Crimea. That check has long since been cashed and cleared. There’re some who see Russia as the backstop against the degeneracy of US-led “globohomo” imperialism. These are the fever dreams of the terminally online branded self, whose desires are hardly shared among most Russians—who probably haven’t even heard of Alexander Dugin.

And there’s a notion that the issues of our time are all “fake” psyops planted by the global elite or functionally reified to serve their interests. This notion performs a real analytical error. If it was all fake, or if there was zero weight to any of these issues, they’d have no potency. Covid really was dangerous for a narrow band of the population. Vaccines probably did offer some protection from severe illness and death for some people. And Putin’s invasion of Ukraine is wrong. The issue is the insane merch vendors, circus performers and dunk-tank barkers outside in the parking lot.

We must escape this discursive battlefield. As Dante describes of the vestibule in Canto III of the Inferno, those indecisive souls who just follow one banner after the other, “their blind life is so abject that they are envious of every other fate.” And just like Jason Russell at the end of the KONY 2012 debacle that set the stage for our era of branded hysteria, “These wretched ones, who never were alive, went naked and were stung again, again by horseflies and by wasps that circled them.”

Stigmatize this behavior. People must pay a social price for demanding someone be fired over a disagreement. Those who use the suffering of others or a human tragedy to build their political brand need to be shunned. Modern-day witch hunters deserve the same as rapture preachers in sandwich boards; scorned into obscurity.