Everyone Is Wrong About Donald Trump

No matter what you say, you're wrong. 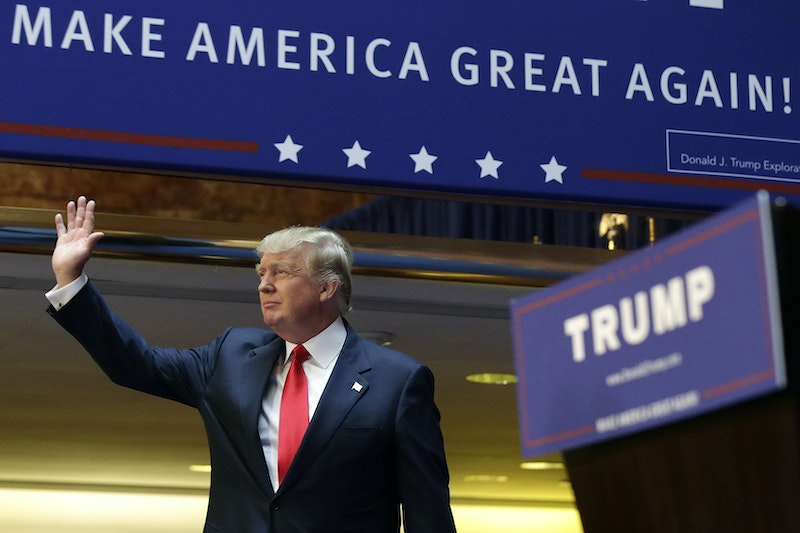 Everybody is defying the conventional wisdom about Donald Trump.

In the New Republic, Jeet Heer encouraged readers "not to listen to the media" and insisted that Donald Trump is a serious candidate. A recent glowing Rolling Stone profile is headlined "Trump Seriously" and talks admiringly about Trump's connection with his crowds. Bill Clinton says Trump can win the nomination, despite what all the pundits are telling you. The American Spectator says Trump can win the nomination despite what the pundits and the GOP establishment are telling you. Don't believe the hype; believe in the Trump!

And then, there are the other people debunking the other conventional wisdom. Nate Silver pooh-poohs the experts, and says Trump has no chance. Jonathan Bernstein shakes his head at the pundits and says, "No. Trump can't win. John Sides at the Monkey Cage blames the media for Trump's success in the polls—the pundits are in a self-reinforcing pundit loop of Trump.

So, there you have it. The media minimizes Trump’s chances, while savvy contrarians know he's a serious candidate who can win. Or alternately, the media is bamboozled and blinded by Trump into thinking he's got a chance, but savvy contrarians know he's a distraction who can't win. Whether you think Trump can win or think he can't, you're boldly defying the prevailing winds of Trumpinion.

How is it possible to be a contrarian no matter what side of Trump you find yourself on? It's simple. People want to write about Trump; he’s entertaining, bigger than life, and polarizing. Readers love him or (more likely) love to hate him. The media wants to give the public what it wants, ergo there are vast swathes of bloated Trump coverage.

With so much writing on Trump, there is nothing about Trump that goes unsaid. Lots of people declare that Trump will win… and lots of people declare that Trump won't win. Lots of people say Trump isn't serious…. and lots of people say Trump is serious. Trump has already transformed the Republican Party, or Trump will dissolve, leaving nothing behind but a faint whiff of bombast. No matter what position you want to take, there are others saying the opposite. Anyone, with any viewpoint, can plausibly take the position of a contrarian.

Why bother though? Why is it so necessary for everyone to pretend they are saying something new about Trump?

You might as well ask why romance novels have happy endings or why action movies feature explosions. Punditry has its conventions, just like any other entertainment genre. One of them is that the pundit has something new to add, or an important analysis to offer. How do you show that your analysis is new and original? By distinguishing it from the old, shopworn, incorrect analysis of everyone else. The thin reed of punditry is supported by vast fields of strawmen. Conventional wisdom is a generative myth; if we ceased to believe in it, all pundits everywhere would fall silent as one. And where would we get our Trump coverage then?

Part of the problem is that the first primary votes in Iowa are still months away. Polls go up and down, debates come and go, but the available positions on Trump ("Trump is serious!" "no he isn't!") aren't going to change much until something actually happens.

So pundits are stuck trying to find something new to say when there's nothing new to say. And there's no way to do that, really, except to insist that everyone else is saying the opposite of whatever it is you want to write.