Everybody Loves a Papal Parade 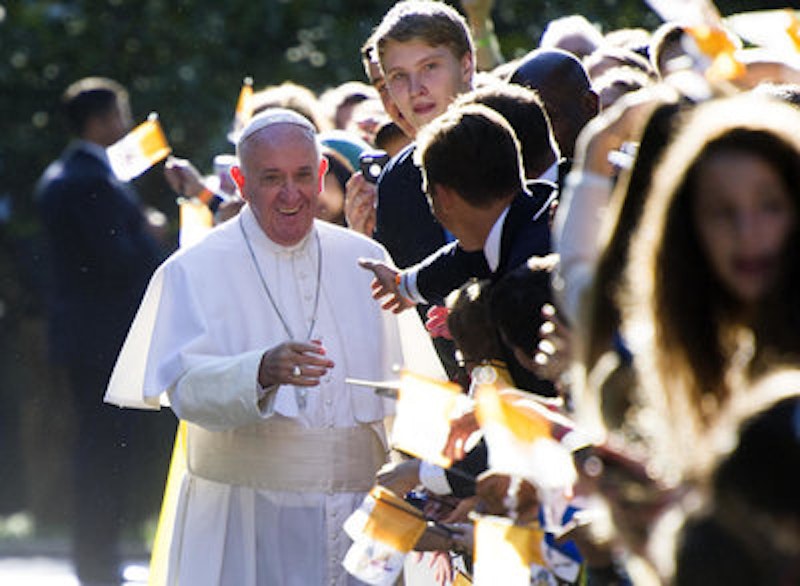 America, celebrated for its Jacksonian egalitarianism and muddy-boots democracy, proved that it can do pomp and pageantry as well as any monarchy. The display of spit and polish, ribbons and braids, crisp uniforms and blazing brass instruments, and flags tacking in the breeze, for Pope Francis’ White House welcome was as splendid as any royal ceremony at the Vatican or Buckingham Palace. But nobody does pageantry better than the Roman Catholic Church.

For if any spectacle competed with the Pope’s White House reception, it was the grandeur of the Basilica of the National Shrine of the Immaculate Conception—the largest Catholic Church in America—with 300 bishops and cardinals assembled for the Pope’s canonization mass of St. Junipero Serra, the controversial 18th Century Spanish missionary. The peace and serenity of the event, the first in American history, together with the regal splendor of the reception, presented the nation’s capital at its ecumenical finest on a sparkling late September day. (Former Maryland Gov. Martin O’Malley (D) attended the Basilica mass. His Republican successor, Larry Hogan, received a papal blessing at a separate event. Both are Catholic.)

Everybody loves a parade. Pope Francis arrived as advertised, a humble, unpretentious man of the people who craves good pizza as well as ice cream, who tooled the jam-packed route along Constitution Ave., first in a grunt-sized Fiat and later in the Popemobile, a modified Jeep rambler. The 78-year-old pontiff did not disappoint. He smiled, waved, signaled thumbs-up, and distributed an abundance of blessings on the jubilant crowds. He even worked the rope lines. And, as is his signature of authenticity, Francis kissed children along the motorcade route, scooped up and hoisted aloft by Secret Service agents or his personal security guards.

To be sure, Pope Francis stepped into a nation that is as divided as the 1.2 billion-member church he leads. He is a leader with a constituency and the world’s largest precinct organization. And even he, though enormously popular, is viewed by many conservative Catholics—including members of the red-hat Catholic hierarchy—as a subversive figure because of the positions he has taken on such flashpoint issues as immigration, divorce, gay marriage, the evils of capitalism and the dangers of climate change, or what Francis calls “the culture of care.”

He has spoken understandingly about gays and gay marriage as well as divorced and remarried Catholics and welcomes all to attend mass. To many liberals, Francis has become an icon, if not a soulmate, a global social worker in a white cassock, though still clinging to church doctrine but with a heart.

His statements and admonitions reflect church teachings as established in papal encyclicals dating back to the epic social document, Rerum Novarum, (“revolutionary change,” or the “rights and duties of capital and labor”) issued in 1891 by Leo X111. Through it all, he personally disavows labels and pigeonholes.

But the presence of the pontiff among more than 70 million Catholics in America—40 percent of them Hispanics—had the pacifying effect of suspending, at least for a few days, the spit-ball politics of the 2016 presidential campaign now underway. Comity replaced coarseness, ever so briefly. Even members of the bitterly divided Congress had been forewarned by their leaders not to make fools of themselves during Francis’ appearance before a joint session, another historic first. The audience of officials and guests was restrained and respectful.

At the White House reception, President Barack Obama was beaming. And well he should have. The two speeches were virtually interchangeable, if not the exact words then at least the spirit. Obama, the former community organizer in Chicago, affirmed Pope Francis’ message of hope and caring. And the pontiff gave a solid endorsement of Obama’s policies on immigration and climate change. And each tacitly acknowledged the other’s handicraft in re-starting relations with Cuba.

In his speech before Congress, Francis delivered very much the same message only more pointed and deliberate—in soft-spoken but cadenced English—to an audience where, to borrow a phrase, the House is divided upon itself: “All political activity must be based on respect,” and “all politics must be directed to the greatest common good.” The Pope mentioned the word “dialogue” at least a dozen times and said, “It is my duty to build bridges.” He said that it’s necessary to “confront polarization,” “every form of polarization… to sustain the life of society.”

And as if in recognition of the pope’s prescience (or perhaps a whispered tip-off), House Speaker John Boehner (R-OH) resigned from Congress the next day rather than face another showdown over government closing and the prospect of being dethroned by the 40-member tea party cohort which indirectly controls the Republican House caucus.

And to his White House words about immigration and climate change, Pope Francis added in his speech to Congress the combustive issues of abortion, capital punishment and a halt to the arms trade, and, implicitly, gun control, calling on elected officials, indeed the world, to “protect and defend human life and each stage of development.” He called for the “global dissolution of the death penalty.” On the environment, Francis described earth as “our common home” that we must protect from “immanent environmental deterioration caused by human activity.”

He paid tribute to Abraham Lincoln and Martin Luther King Jr. for delivering “a full political life for African-Americans.” In curious and obscure references, the Pope recalled two Catholic outliers whose names generations of Americans wouldn’t even recognize—Dorothy Day, the social activist of the 1930s and founder of settlement houses in New York, and Thomas Merton, a businessman-libertine who converted to Catholicism and became a Trappist monk and author of the best-selling confessional-meditation, The Seven Story Mountain.

At the newly refurbished St. Patrick’s Cathedral in New York, Pope Francis conducted evening services in the huge arched gothic vault of a house of worship. He greeted “my Muslim brothers and sisters” on their holy day, Eid al-Adha, and shared their grief over the death of nearly a thousand in the stampede at Mecca. But the loudest volley of applause erupted when he praised and thanked the women of the church for their work.

The Pope was never off message during his visit to America, bearing the same tidings and warnings whether in Washington, New York, the United Nations or Philadelphia. His homilies may have been left-leaning but, like any smart politician, he split the difference and gave conservatives something to crow about, too, especially on the broad issue of sustaining life in any form at every stage.

Pope Francis arrived in America at a critical time as part ambassador and part pastor. The number of church-going Catholics, and even those who still identify as Catholics, has fallen precipitously. Church attendance is down measurably as is the ranks of those in the priesthood and other religious orders. Its future lies mainly with the newly arrived immigrant population, especially Hispanics, which is the fastest growing segment of the nation’s population as well as of the Catholic Church.

The Catholic Church in America straddles a pluralist society where the role of religion and of God and government is enshrined in the First Amendment but also hotly debated in constantly striving to achieve balance. On the day of the pope’s speech to Congress, for example, the Freedom From Religion Foundation sponsored a full-page ad in The Washington Post berating the invitation: “Unfortunately, Congressional leaders John Boehner and Nancy Pelosi, both Roman Catholics, appear not to share JFK’s vision of a secular America. Instead they invited the leader of their own aggressively homophobic, patriarchal and undemocratic religion to address a joint session of Congress today – the first time in our history that a religious leader has been handed such a government-endorsed pulpit. The framers of our godless Constitution wisely envisioned a government free from theocratic control.”

The American Catholic hierarchy of cardinals and bishops is concerned about what they consider the assault on religious freedom under Obamacare’s contraception requirement even though accommodations and compromises have been made. Yet surveys show that about 80 percent of Catholics disregard church teaching on birth control and regularly use artificial means of contraception.

The Catholic collective, clergy and laity alike, reflects the political divisions in America, the evangelical wing and the liberal or more accommodating wing, though the clergy is still bound by church doctrine and the secrecy of the confessional protects their behind-the-screen advice.

But the Pope’s visit bracketed days of celebration and joy and a welcome respite from the bitterness of partisan politics. Pope Francis’ most profound words were, perhaps, the most simple: “God bless America.” We need it.