One more reason to doubt what you read. 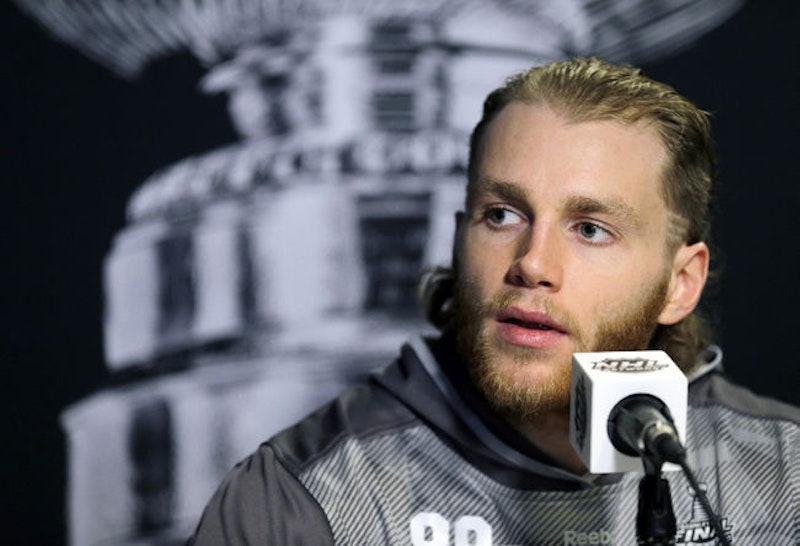 NHL hockey star Patrick Kane is currently under investigation for sexual assault on a woman he allegedly picked up on August 2 after a night of what some hockey players do—drink and carouse in bars. This particular bar is in Buffalo, NY. Last Wednesday, the case took a bizarre turn when the accuser's lawyer, Thomas Eoannou, announced that the case's rape kit had mysteriously turned up empty on the doorstep of the accuser's mother. He even produced the alleged rape kit for the press, and said he hoped whoever dropped it off was a “Good Samaritan."

This would’ve been a major development had it been true, which it didn't turn out to be. On Friday morning, Frank Sedita—the Erie County District Attorney—debunked Eoannou's sensational claim in a press conference. Eoannou no longer represents the alleged victim, claiming that he’d been duped by her mother's lies.

The first impression I got after this turn of events hit Twitter was that the actual rape kit had somehow turned up on the woman's doorstep. My twitter timeline zipped, and the tweets I received didn't give the impression that this was merely an allegation. Samer Kalef, reporting for Deadspin, wrote: "This is breathtakingly obscene. The accuser’s rape kit should never have left the police station, since it’s evidence."

Eoannou embarrassed himself by calling a press conference and making outrageously false claims, but he had company in the confusion. Christine Brennan, writing for USA TODAY, wrote that, in light of the new "revelations," the NHL "must tell Kane it’s time to leave training camp and go on paid leave." This despite her knowledge that the police claimed they still had the rape kit intact and in an evidence locker. Brennan referred to "Wednesday’s disturbing news," and the "strange and troublesome allegations." One of the precedents she cites to justify Kane's suspension was swimmer Michael Phelps being suspended for three months when a photo of him smoking marijuana went public, which perhaps gives us some insight into her sense of justice.

SB Nation (byline shared by Sarah Connors, Katie Esmonde, Achariya Rezak, Emily Wang & Ari Yanover) weighed in too after Eoannou's false allegations went public, criticizing ESPN for not televising his ludicrous press conference. At this point, ESPN is looking pretty smart for not putting that travesty of a presser on the air. While this article's authors also explicitly acknowledge that the Erie County police denied any evidence was missing, they also called for Kane's immediate suspension.

Bloomberg's Kavitha A. Davidson jumped on the bandwagon too, writing, "It's time for the NHL to step in and suspend Kane, with pay, while the investigation continues, to spare us this all-too-familiar spectacle." Davidson offers the case of Los Angeles Kings defenseman Slava Voynov, who was suspended in October 2014 after a charged of domestic violence, but this is a poor comparison. Voynov was arrested for felony domestic abuse, and Redondo Beach police reported that his wife's face was bloodied and lacerated.

Why didn’t any of the writers mentioned above see fit to wait for a clarification on the rape kit allegation? It would’ve been more responsible to do some fact-checking before making their pronouncements. After all, Eoannou's claim was that an "evidence bag" had been left on the doorstep, but as D.A. Frank Sedita demonstrated in his press conference, the evidence was never in a bag. Erie county rape kits are kept in boxes, not bags.

A cornerstone of American justice is the presumption of innocence. Why should a hockey player who hasn’t been arrested or charged with a crime be deprived of due process? The Buffalo News reported that the leaked results of a test showed that Kane's DNA did not appear below the waist of the accused. While this does not necessarily exonerate him, it certainly has to be taken into account.

Advocating for a suspension based on a claim that was quickly proven to be a hoax is just one more example of how far standards of journalism have fallen in the modern era. Weren't there lessons that journalists should have taken to heart from the Rolling Stone fake UVA rape scandal?

In light of the fact that writers for Bloomberg, USA TODAY, and SB Nation made lazy claims based on a hoax, I'd be curious to see how their opinion have since changed. I doubt any of them would revise their recommendation that Patrick Kane be suspended, even after the D.A.'s press conference.