Don’t Tell It to Alan Feuer

The New York Times reporter lives in a fantasy world. 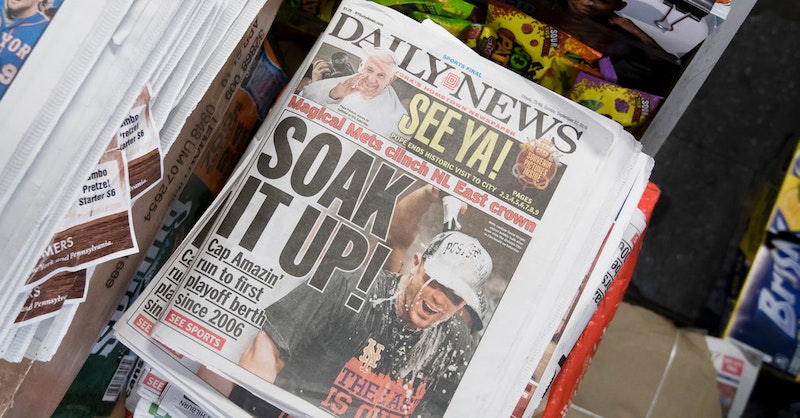 I’ve no idea whether New York Times reporter Alan Feuer—employed there since 1999—is a regular reader of The Daily News, the “Picture Paper” established in 1919, but his Sept. 28 story on the tabloid’s struggles was so larded with purple prose that you’d think he was auditioning for a job at Gawker. (Don’t laugh: the Times is ailing, if not yet on life support.) The News is on its last legs, as owner Mort Zuckerman has failed to find a buyer for his red-ink property, and recently sanctioned a mass layoff of reporters, gutting the features, business and sports departments. (Does anyone care at this point? I’m doubtful.) Such reports about dailies, which have regularly appeared for more than a decade, no longer stun men and women in the business, notwithstanding the angst if a friend is caught in the ongoing turbulence. In a matter of five or six years, I’d wager, the carnage will be nearly complete, and the surviving properties will live on as niche products.

Feuer writes that the layoffs on Sept. 16 occurred “with the swiftness of a Soviet-era purge… At the very least the job cuts meant that the recent attrition at newspapers across the country had finally arrived in force in the nation’s media capital.” What year is Feuer living in? The bundle of metro-area newspapers that I once bought nearly every day have been hammered repeatedly, hardly a deviation from the nationwide winding down of print. The News, New York Times, New York Post, Wall Street Journal, weeklies New York Observer and The Village Voice are all victims, and as they make last-ditch efforts to cadge revenue from low-paying digital advertising (compared to print) it’s an ugly, though irreversible, reality of today’s media.

Feuer quotes a reporter who lost his News job: “The mantra in this building is web, web, web. But they haven’t figured out how to monetize the web yet. And so it just gets trashier and trashier in an effort to juice the numbers.” (This source spoke anonymously, not wanting to mess up a severance package.) This exact sentiment has been expressed in the past decade by probably 200 laid-off or bought-off editorial staffers, so it’s not like Feuer’s on to something new. Maybe, on the generous side of the ledger, Feuer’s simply inherited the media obit beat and he’s doing the best job he can.

But I’m not feeling so charitable. There’s a gratuitous swipe at The Post (“[I]t is hard to know what the paper cares about aside from sex, gossip and the shifting whims of its owner, Rupert Murdoch”) as if that money-losing tab had no sports section and likely finds its way into The Times boardroom far more often than The News.

Here’s where it gets rich: “But for many years, The Daily News, available to actual New Yorkers [so Times, Journal and Post readers are imaginary?], in their neighborhoods, offered up a seven-day feast of sweet and savory stories: meaty police reporting, salty columns on City Hall, fat analyses of the Mets’ starting pitching and, for dessert, a smattering of cheesecake shots of models and celebrities.”

“Sweet” and “savory”? “Cheesecake shots of models” as “dessert”? Maybe it’s time for Feuer’s editor, if he has one, to consider a new candidate for a Times buy-out.