The Concept of “American Exceptionalism” is Crazy

It's basically us versus them, and we don't like to lose. 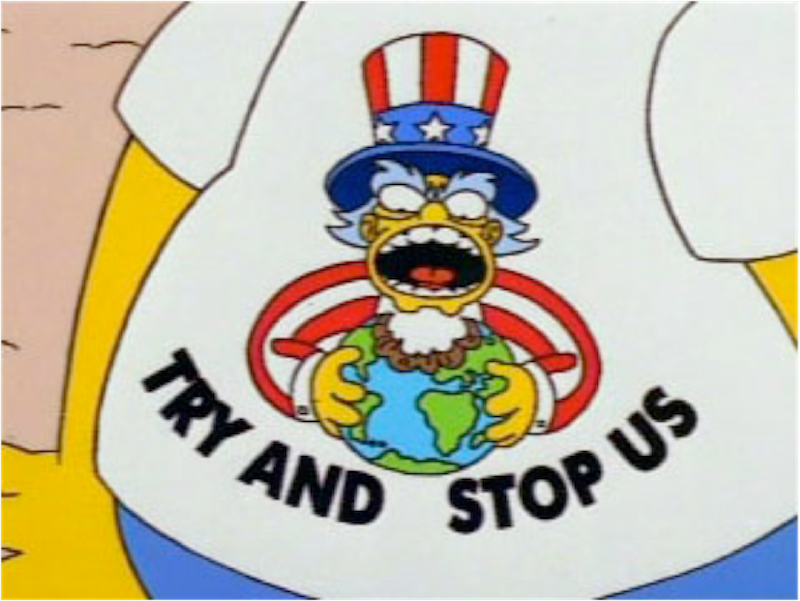 “American exceptionalism” is an exception to the rule of not blaming God for the mess that humans have made here on earth. It is also a Republican code for chest-thumping and assigning a scarlet letter to anyone who disagrees with their Darwinian ideal that screwing each other breeds a better America. Newt Gingrich liked to employ the phrase whenever he had nothing more incendiary to say as a way of exciting the foam-at-the-mouth crowd. And now Mitt Romney has appropriated the words because he really has nothing at all to say. Put another way, America exceptionalism is profound baloney. But its mere utterance makes conservatives feel better about their emotionally and morally insecure selves.

The notion of American exceptionalism derives from the claim that God has assigned a special role to America in world history and that it is the nation’s mission to assert the American way of life on others. In other words, do as we say or we’ll blast you out of your undershorts. That was the neo-conservative Bush-Cheney doctrine in a well-militarized nuclear nutshell. So how’s it going in Afghanistan and Iraq? Anyone who disagrees with the exceptionalists is viewed as demonic and unpatriotic and even worse, un-Christian.

American exceptionalism is kind of a nationalized version of the Divine Right of Kings that this nation fought several wars to escape. In its most fundamental application, the phrase is the newest formulation of them vs. us, liberals vs. conservatives, Christians vs. Muslims. The mention of the words makes Tea Partiers’ hearts go pitter patter and their salivary glands flow freely. They find those exceptional roots in the Declaration of Independence’s comforting assertion that all citizens were “endowed by their Creator with certain unalienable rights.”

These rights, as apportioned by exceptionalists, apparently do not apply to children of illegal aliens, pregnant women, working mothers, gay couples, persons who want to go to college, kids with college loan debt, seniors receiving food stamps, labor unions, progressive Democrats and a certain Democratic president who is a professed Christian but has a Muslim-sounding name. Under American exceptionalism, vaginal probes and strip searches are welcome civic objectives and a minute-old embryonic spec on a microscope slide is a human being that has the full rights of citizenship which, broadly interpreted in certain states, may or may not include the right of the host mother to cast two votes, one for herself and one for the unborn fetus. The fetus must first, of course, provide a photo ID.

Under the rubric of American exceptionalsim, however, corporations are people and a pound of broccoli and a health care plan have the same social worth and weight. So, too, do super PACs. American exceptionalism is the special droit du seigneur (entitlement) of the .0001 percent of Americans at the expense of the 99.9 percent who lacked the foresight to pick the right parents or who were not born with a silver binki on which to teethe. There are, no doubt, those who live in benighted ignorance who actually believe that people decide at an early age to grow up uneducated, poor, socially and otherwise deprived. Exceptionalists would argue that such a life is a choice.

So here comes Romney along the pander trail: “Our president doesn’t have the same feelings about American exceptionalism that we do,” Romney said in a speech in which he implored voters “to restore to this country the principles that made this nation the greatest nation in the history of the Earth.” “Our president doesn’t have the same feelings…?” This, of course, is intended to underline that strange-sounding name that was bestowed at birth upon President Barack Obama (for pure meanness others insert his middle name, Hussein.) The hot-eyes along the Bible Belt will immediately infer, as is intended, that Obama is a Muslim and not a Christian, as 47 percent of the evangelicals do. American exceptionalists will blame their ignorance on God as expressed in the words that all citizens were “endowed by their Creator, etc.”

Gingrich, asserting his belief in the Constitution and the Declaration of Independence, takes American exceptionalism a stretch further: “Now this is the opposite of Obamism. Because Obamism is a repudiation of the Declaration of Independence.” Tell it to Osama bin Laden, who was aerated by a spray of Navy Seal bullets, on command of Obama, to protect that independence. And it was Obama who supplied money and common cause to the demonstrators in Egypt and on the bloody tribal sands of Libya to rid the world of Moammar Khadafy.

The irrational beauty of the phrase American exceptionalism is its imprecision. It means whatever craziness anyone wants to read into it. Some on the left would argue that diversity is America’s true blessing. Others, such as Rick Santorum, would classify freedom as the greatest gift from the Almighty. But God, in this theocratic view of America, did not bestow freedom upon us. Americans bled and died in wars at home and abroad to win and preserve that freedom. So don’t go blaming God for war.

Fully 60 percent of Americans believe that America is truly heavenly sent, that the nation’s and God’s mission are inextricably bound in some kind of a celestial crusade. Santorum, kind of the Elmer Gantry of American politics, steadfastly believes that religion has a role in public life, enthralled his evangelical audiences with his view of a cosmological law-making body with kneelers and Rosaries instead of law books and desks. Santorum said that John F. Kennedy’s speech on the separation of church and state made him want to vomit. You’ve got to wonder whether Santorum understood that Kennedy was expressing the same sentiment as Jesus when he said, in the Sermon on the Mount, “Render to Caesar the things that are Caesar’s and to God the things that are God’s”—in other words, separation of church and state. Santorum’s assertions are just the latest of centuries of atrocities committed in the name of Christ.

Forget about the errant Secret Service agents who partied in Columbia with prostitutes on the federal dime. And ignore the GSA’s lavish $1 million good time in Las Vegas. And give Leon Panetta a pass for the $800,000 worth of airplane trips he took to his home in California. And forgive the troops for the photos in which they posed with body parts of dead Taliban bombers. Consider what’s acceptant by the American exceptionalists: The dithyrambic dialogue of Ted Nugent, a gun nut and Romney surrogate and the most ignored and unlistened-to rock musician in America:

“If you want more of those kinds of evil anti-American people in the Supreme Court, then don’t get involved and let Obama take office again. Because I’ll tell you this right now: if Barack Obama becomes president in November again, I will either be dead or in jail by this time next year… But if you can’t go home and get everybody in your lives to clean house in this vile, evil, America-hating administration, I don’t know what you’re made of. If you can’t galvanize and promote and recruit people to vote for Mitt Romney, we’re done. We’ll be a suburb of Indonesia next year.

“Our president, and attorney general, our vice president, Hillary Clinton, they’re criminals, they’re criminals. And if you take that adamant ‘we the people’ defiance, remember we’re Americans because we defied the king. We didn’t negotiate and compromise with the king. We defied the emperors. We are patriots, we are bravehearts. We need to ride into the battlefield and chop their heads off in November.” The Secret Service interviewed Nugent and must have decided that he is nuts but harmless.

And if that’s not enough to get the old America-first blood-lust flowing, how about the thoughts of Rep. Alan West (R-FL) who was asked about Marxists in Congress: “No, it’s a good question,” West said to quiet a jeering crowd. “I believe there is [sic] about 78 to 81 members of the Democratic Party that are members of the Communist Party.” Now that’s American exceptionalism.