He owns that too. 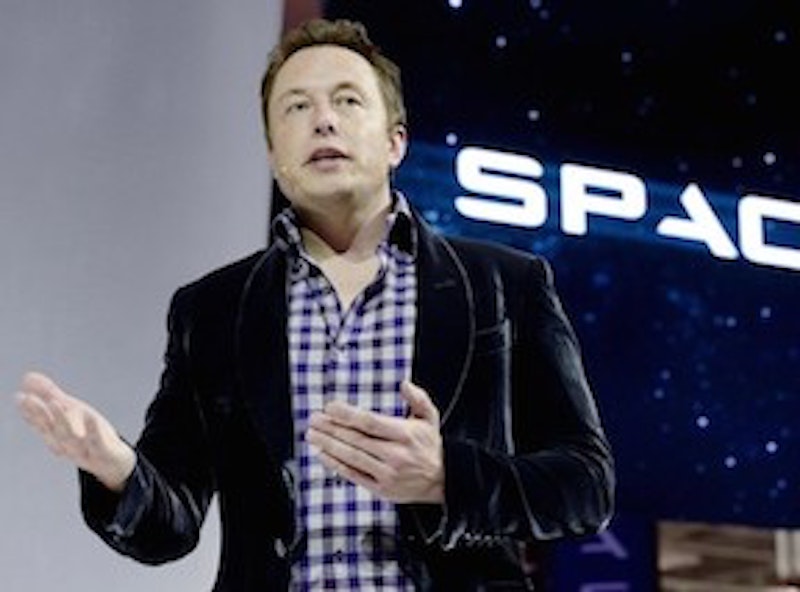 It's been a week since Elon Musk had to apologize for calling a heroic rescue diver a pedophile on Twitter. Musk responded to news that a Thai soccer team was trapped in a flooded cave by announcing a plan to build a high tech rescue sub. A British caver involved in the rescue said, correctly, that Musk's idea was a stupid and unworkable publicity stunt.  As a self-proclaimed billionaire science genius Musk was outraged at this truthful attack on his brand. So he tweeted a smear to his 22 million followers, some percentage of whom are notorious for harassing people on Musk's behalf.

Anyway, Musk apologized. His Twitter feed has returned to its usual cheery bland self-boosterism, tweeting good reviews of his Tesla electric cars, bragging about his rocket company's tests, and occasionally mentioning how seriously he takes climate change, because he's a science tech guy concerned about the future of the world.

Musk, like Trump, uses social media for its leveling effect. Twitter creates a virtual platonic coffee house, in which people of every walk of life can speak to each other in the same 280-character bursts. The level playing field has some effects that are truly democratic; anyone can tell Musk that he's a bloated egoist and that his cars suck, and Musk (or someone on his staff) has at least some chance of seeing it and being forced to recognize that someone thinks he's a bloated egoist whose cars suck. Twitter lets you talk back to the wealthy and powerful in a way that you couldn't really talk to Andrew Carnegie.

Twitter also lets Carnegie talk to you as an equal though—which is a potentially deceptive marketing opportunity. Musk on Twitter is just another guy talking about the things he loves—electric cars, space, the environment, making the world a better place. He's a good person. He's your friend, the earnest billionaire.

Even accusing a hero of pedophilia because he wasn't sufficiently servile can redound to Musk's benefit. Dan Kaminsky, a security researcher, went on a Twitter riff about how Musk was the victim of the "internet hate machine." Twitter mobs pile on everyone who proposes something good, like useless submarines, and then the Internet just becomes more hateful and no one’s willing to try to make the world a better place. Musk is trying, kids. Musk wants to help. Let him help!

Musk may or may not want to really help. But whatever he wants to do, he's a billionaire pushing his products—and thanks to social media one of his chief products is himself.

This isn't all that different from Andrew Carnegie, who wrote an autobiography in which he explained that he made a fortune by being awesome, and advised other people to admire and emulate him. The wealthy have always wanted not just power, but adulation. Contrary to the old saying, money can buy you universal love. And once everyone loves you, they're likely to buy more of your crap.

For Musk, Twitter isn't an Internet hate machine. It's an Internet love machine. He logs on to promote his products and bask in the praise of millions of followers. And when someone demurs, or suggests that Musk is not in fact a beneficent genius, but instead just a giant asshole—well, Musk can point his two million followers at the dissenter and say, "Get him." You may think that's gross, but other Musk fans are ready to leap forward and argue that the grossness is also kind of cool and humanizing. Yes, he called someone a pedophile for no reason. But doesn't that show what a deep and troubled soul he is?

Musk may or may not have a soul. But he's not a cool guy hanging out on Twitter to talk about how much fun rockets are. He's a billionaire capitalist who forces his workers to spend long hours on the job in unsafe conditions. He's a powerful man who treats his subordinates badly. He may be on social media, but he's not your friend. He's just there to have you lick his boots—and to drown you in a million sycophants if you don't get them clean enough.