It’s a great idea for restaurants, but doesn’t hold up to scrutiny. 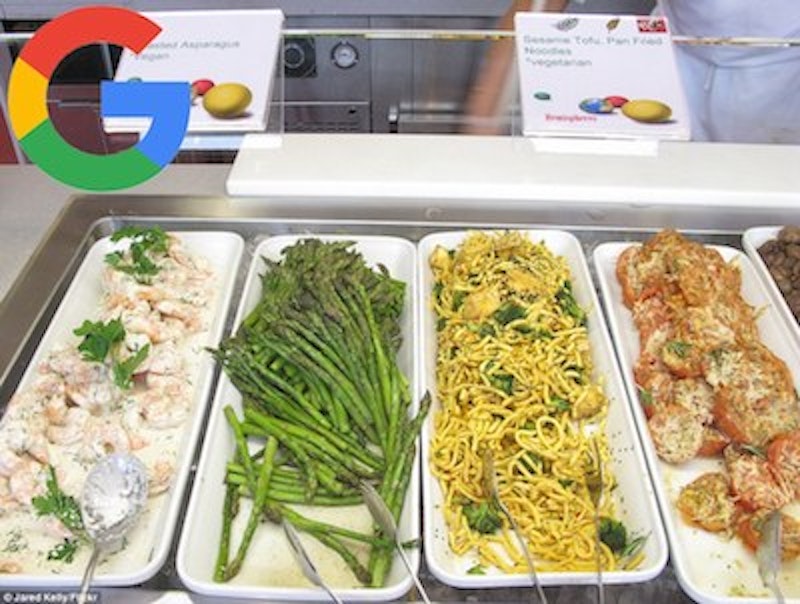 Ever since Google hired its first chef 20 years ago, the firm—and the entire tech industry—started gaining a reputation for feeding its employees like royalty, often for free. Check it out on Instagram—there’s beautifully composed breakfast bowls and omelets, lobster and freshly-made sushi for lunch, and diver scallops with parmesan, squid ink rice, and maitake mushrooms for dinner. Then look at your pathetic ham and cheese sandwich and bag of Lays and try not to call for a Jacobin-like purge of the techies.

Well, you can feel a little bit better about your plight now that two members of the San Francsco Board of Supervisors are taking action to ban any future workplace cafeterias in the city limits, which would force pampered coders into the streets to seek sustenance just like everyone else. At least that's how the bill's co-sponsor, Aaron Peskin, put it when discussing the law that wouldn’t apply to any of 51 such cafeterias (often Yelp-reviewed) currently operating in San Francisco.

The idea will find some populist appeal in San Francisco, given that there’s been an ongoing backlash against the tech companies and their workers ever since they began imposing gentrification on the city during the dotcom boom on the 1990s. Local restaurants, who the two supervisors say they’re looking out for, are naturally all for this proposition. The legislators say they’re trying to avoid “the Amazon effect that’s hurt so many retail businesses and restaurants across the county,” and believe their plan “is forward thinking legislation.”

When you hear about proposed “forward thinking legislation,” you can be sure that it entails the loss of a longtime right. In this case, it’s the right of a company to have a restaurant on its premises, which has never been particularly controversial. The rationale for withdrawing that right will always be “for the common good.” The way this one’s framed pits two sides against each other. On one side it’s the arrogant tech companies, modern-day Visigoths who’ve made a diverse and eccentric city into their expensive playground while driving lower-income people out, and on the other side are the small business owners so essential to the vibrancy of a city.

The problem with bans—whether it’s cafeterias, speeches, or plastic straws—is that the simplistic “us vs them” framework normally applied usually neglects to cover all parties that will potentially be affected. San Francisco's an exorbitantly expensive city to live in, so do you want to impose another cost on daily life? Keep in mind that there're many office support people at tech companies to whom the perk of free food makes a difference in their lives. Most likely they’ll now brown-bag it for lunch, because downtown San Francisco restaurants aren't cheap, so do you ban this too? The food in these cafeterias is healthy—plenty of kale on the menu—so do you want government banning that?

This isn’t a first. When Facebook opened an office complex in Mountain View, California, city officials stipulated that the firm couldn’t provide free food to its workers. But that’s a much smaller town than San Francisco. When you have room for a relative handful of companies, mixed use development can be a good tool in creating vibrant downtowns. Ironically, this happened because Mountain View restaurateurs were upset about Goggle having its own free cafeteria, but this now gives Google a recruiting advantage over Facebook.

Twitter, Uber, Square, and other tech companies were given generous tax breaks in 2013 to place their headquarters in San Francisco’s Mid-Market district. The hope was that this would stimulate economic activity in a stagnant neighborhood, but the workers are staying in for lunch and local restaurants are paying the price. Is it possible that city officials didn't realize these companies would have their own on-site cafeterias when they inked the deal? The two Supervisors in question are resentful of tech firms, but their law would apply to any companies wishing to feed their employees with on-site facilities.

Ahsha Safaí, the proposed bill’s other co-sponsor, said he didn’t want people biking to work and spending the whole day inside one building without interacting with the neighborhood. Maybe he and Aaron Peskin don't know that many tech companies feed their employees using catering companies and various delivery services like Club and Zesty that would not be affected by their proposed new law. Tech companies like to keep their employees in-house all day because it’s part of their corporate culture—the cafeterias are part of a plan to create a space where employees who normally don't sit next to each other can interact and come up with new ideas. If San Francisco’s going to signal that this culture isn’t welcome there, these firms may look elsewhere.

It’s not a positive development when a company moves into a 400,000 square foot building downtown and its employees have little presence in the neighborhood. But blanket bans are a blunt instrument with unintended consequences. The Facebook situation in Mountain View showed that local governments can act to protect their urban environments while still attracting new business development. That town, while restricting in-house food subsidies to 50 percent, allows Facebook to cover the cost of meals at local restaurants. This gives employees another option, and they get outside the complex for an hour, which could have benefits. When cities are faced with these situations, a little creativity and flexibility works a lot better than the cudgel.