Is Jonathan Chait My Colleague?

Some journalists are more equal than others. 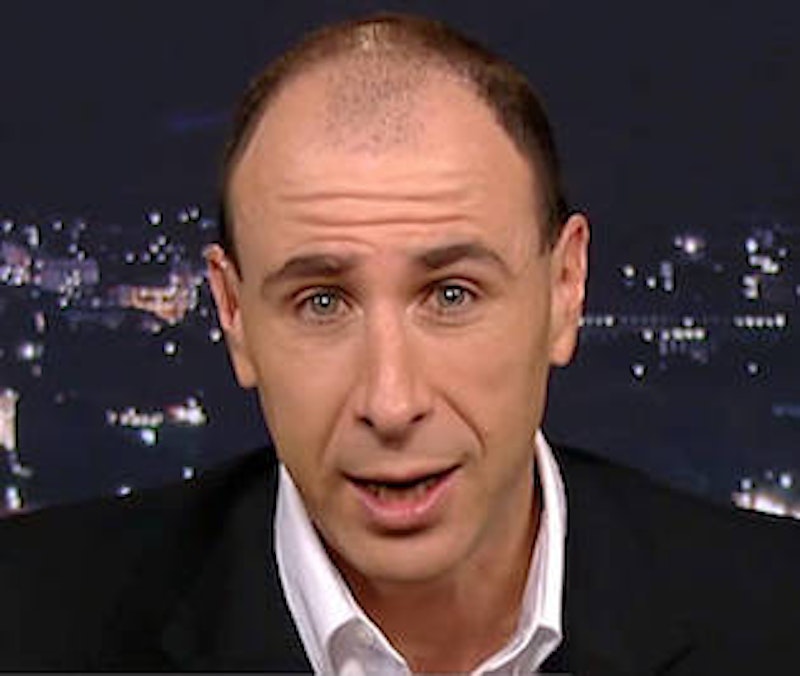 Should journalists protect other journalists? The answer is, "It depends." Journalists have a duty to stand by each other when the government attacks a free press. Even if you don't like Guardian reporter Ben Jacobs, I hope all journalists (and the overlapping category of all decent people) would agree in condemning Greg Gianforte, the House candidate who physically assaulted Jacobs for daring to ask him questions during his campaign.

Other requests for solidarity are dicier. In particular, all journalists are often encouraged to show solidarity with the most powerful journalists. Pundits with national platforms and six-figure salaries assume that the fate of powerful pundits is the fate of all journalists. People with less power and less standing should organize their political sympathies around whatever is most convenient for people at the top.

Matt Yglesias—a Vox editor and writer whose work I generally admire—provided a striking instance of his bias this week in defending another powerful pundit, New York's liberal commentator Jonathan Chait. In a closed meeting at New York, Chait was asked if he was pleased that Trump had won, since it gave him material for his columns. Chait responded, "One hundred percent". He added, "Maybe that makes me a sociopath.”

Chait's comments were leaked to Ashley Feinberg at Huffington Post. In a follow-up email, Chait explained, "I was commenting in an ironic and self-deprecating fashion about the way in which I can professionally disassociate myself from the events I am commenting on." Which doesn't change the fact that some—people with family who are losing health care, for example, or people whose relatives are targeted by ICE—might not be able to disassociate in the same way.

Yglesias is friendly with Chait on Twitter, and the two occupy similar positions at the top of the heap of wonkish left pundits. Yglesias didn't feel that Chait's comments were egregious or evil—and thought that leaking them was violating a norm. "I don’t understand the thought process that would lead someone to view this as a transgression worth betraying colleagues’ confidence over," Yglesias mused on Twitter.

I can enlighten Yglesias. I don't work on staff, but as a freelancer, I’m always aware that, in the eyes of management, there are colleagues and then there are colleagues. There are people on the masthead who are seen as central to the brand, and for those people management will fight long and hard—even if they do bad things, up to and including, as #MeToo has shown, sexual abuse and harassment.

And then there are the others, who are seen as more disposable. If there are layoffs, they get laid off. If they say something not quite right on social media, they may get fired. If they speak up in a meeting with Jonathan Chait and tell him he's being a jerk, they may well be putting their careers at risk.

"Colleague" implies equality and solidarity. But people like Jonathan Chait aren't equal to most of the folks on New York’s staff. The format of the meeting in which Chait spoke illustrates that. Chait was interviewed in front of the rest of the employees, because he’s seen as especially important. He's a star; he's close with management. He's not accountable to his "colleagues." He has power over them, even if that power is unspoken or informal.

Journalism, at its best, works to redress and expose just that kind of power imbalance. I can't read minds, but guess that people leaked to Ashley Feinberg because they thought what Chait said was wrong, and they didn't feel they had the resources to hold him to account as a colleague, because he's not actually a colleague.

Chait’s often talked about the evils of the current administration; there's no question that he opposes Trump. But jokes can be revealing, and when Chait says, in a comfortable setting, that he can enjoy some aspects of the current regime, that’s newsworthy. How does Chait's ambivalence affect his coverage? When he attacks left protestors, how is that related to the fact that he feels advantaged in some ways by Trump? Is Chait the best person to headline New York's anti-Trump coverage? Might someone else do a better job—someone less male and less white, for example?

Yglesias often writes about class and labor issues, so you'd think he'd understand the ways in which workplaces can stifle dissent, and the role of whistleblowers. It's hard to see one's own position clearly, though. Celebrated pundits can sometimes shift the public conversation, which is one sort of power. But those pundits have a much more certain power within their own media companies. The rhetoric of collegiality is itself often deployed to silence criticism. The people at the top always tell you that you're on their team; that we're all in this together. But occasionally the mask slips, and someone like Chait reveals that he doesn't feel like he's on your side. It’s odd to express surprise that his colleagues—or are they subordinates?—took him at his word.