An assessment of comedy has devolved into a public venue to vent personal grievances. 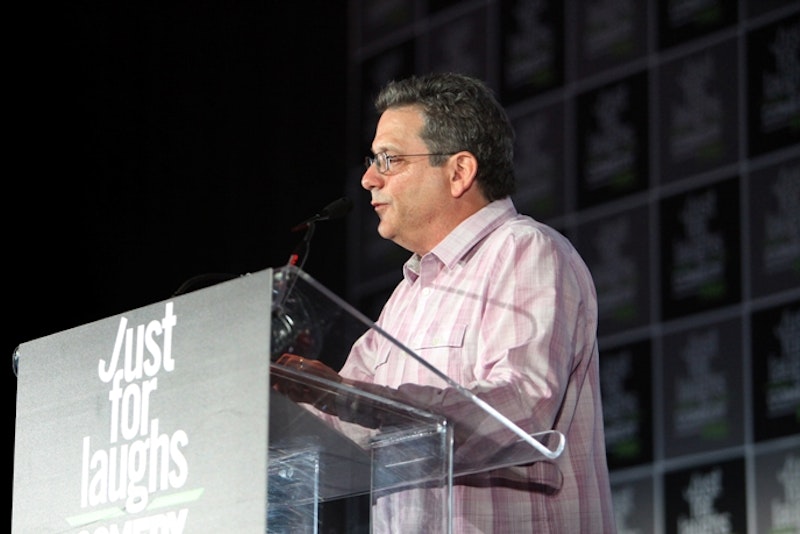 Plenty of heavyweights in the comedy industry head to Montreal every July to attend the Just For Laughs festival, where live audiences can view comedy shows, plus panel discussions, awards, live podcasts, and speeches. This summer featured Dave Chappelle (performing with musician John Mayer), Trevor Noah, Jimmy Carr, Chris D’Elia, and many more. Just like the last 22 years, the festival was capped off by Andy Kindler’s long rant that’s known as the State of the Industry Address. He’s there ostensibly to assess the current health of the comedy world with his grating, nasally cartoon voice, but in reality Kindler only covers the insiders he holds grudges against. The Queens-bred comic joked this year that people have asked him why he doesn’t pass the torch on to a younger comedian, but that nobody wants that torch. He’s probably not kidding, because ragging on your fellow comedians who’ve all had to struggle to get where they are isn’t exactly a dream gig.

But Kindler thrives in his self-appointed role as comedy’s ombudsman. Feuding with comics far more successful, most notably Ricky Gervais (with whom he’s had a years-long weird obsession), really is his thing, although they’re mostly one-way feuds because his targets mostly don’t respond to his barbs. The annual speech is probably of more value to Kindler than a dozen or so of the therapy sessions he’s spoken of attending. The 80-milligram dose of Prozac he says he’s on may have rounded off a few rough edges, but Kindler’s still no Mr. Rogers.

Talking Dead host Chris Hardwick, who’s recently gotten his job back on the AMC program after an ex-girlfriend went public with allegations of abuse sparked a suspension, was the first to undergo the Kindler treatment this year: “Now we can all go back to tolerating Chris Hardwick like this never happened, right?” Kindler then added, inexplicably, “I’m sweating like a Jew lifting a paper off of a podium.” He took a few more listless potshots at Hardwick before moving on to Joe Koy. But he failed to land even one punch against the Filipino-American stand-up comic, who had his first Netflix comedy special last year (Kindler’s never had one), because he’s never seen Koy’s act and doesn’t intend to. That’s lame, but at least it made his next joke make sense: “I’ve just flown in from L.A. and boy am I tired of my material.”

Then it was on to Jimmy Fallon, whose costly faux pas of playfully tousling Donald Trump’s orangish coif was nearly two years ago. The shot Kindler took at Anthony Bourdain was at least fresher—he wants CNN to stop running his show because he already knows that the ending is “life isn’t worth living!”—but you wonder if he can’t find more deserving targets for his wrath other than people who aren’t around to defend themselves. The jabs Kindler took at Louis C.K. were in a similar vein, as that comic’s career perished back in November of last year—it’s like beating a dead horse. His joke about Jeremy Piven wasn’t bad though: “Jeremy Piven is back doing stand-up. I’m not sure if it’s stand-up or if he just alienated a whole improv troupe.” Kindler said Piven, who got caught up in the #MeToo movement, “is a horrible person,” an opinion that many share.

Kindler told the audience that he’s trashed critics a number of times over the years in this speech, and that it hasn't gone over well because it makes him look petty. But he’s compelled to spill lavishly when he’s developed a personal grievance against someone, so he droned on at great length against The New Yorker critic Emily Nussbaum, who’s become his new Ricky Gervais. One of her crimes was years ago, praising the feminism of Sex and the City. Another offense was writing that Weird Al Yankovic’s a “semi-familiar” figure when he’s actually as famous as the moon, according to Andy Kindler. Kindler made a big deal about Nussbaum’s use of the word “oracular” in one of her pieces, as if it’s pretentious. Then it was on to more slams against the now irrelevant Louis C.K., which didn’t help pick up the flagging pace as the 50-minute point approached.

As the address lurched towards its long-overdue conclusion, it looked like Kindler was going to lay off the hobgoblin that’s taken over approximately half his OCD mind for years now—Ricky Gervais—but he slipped in a dig about Netflix paying the British comic $40 million to make bad jokes about Caitlyn Jenner being a bad driver. Many of the shows on Gervais’ recent Humanity Tour sold out in minutes, so there must be a major audience out there for bad jokes.

The Los Angeles-based comedian admitted 22 minutes into his one-hour speech that most people would end it at that point. That would’ve been an improvement, as his final fizzling 22 minutes at the mic resembled an undertrained runner struggling to complete the final five miles of a marathon. I didn’t hear a collective sigh of relief when it was over, but maybe that was just out of politeness. Kindler’s State of the Industry Address was fresh in its early years, but it’s an endurance test now. I didn’t hear many laughs on the audio version I listened to.