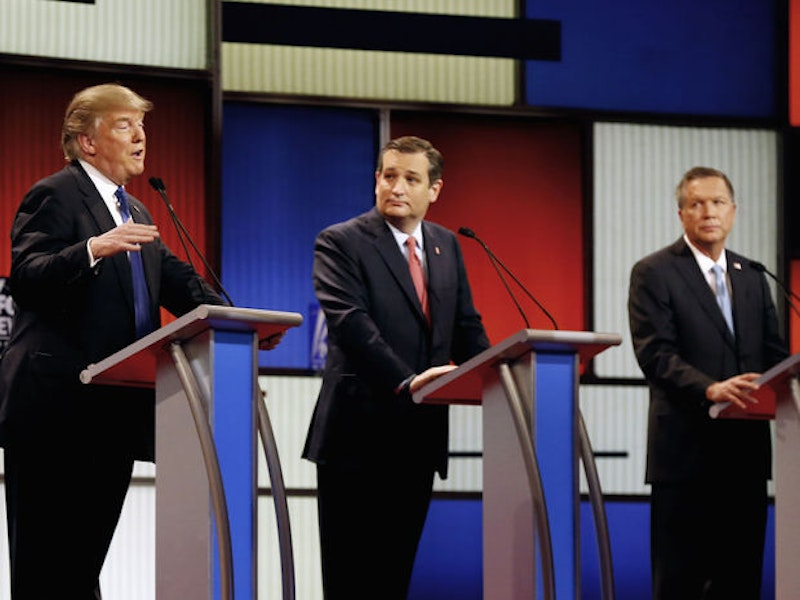 The Republican campaign is entering the demon pass, which is my cute way of saying that various little-known rules are about to become relevant to the process. When struggling to enact Obamacare, House Democrats considered a bit of footwork called “deem and pass,” a move that would’ve let the program become law without House members voting to approve the legislation itself. The Democrats dropped the idea, but not before Republicans dug up the term “demon pass,” a phrase I find dead-on for these situations. I mean situations where nobody really knows the rules but they want to keep guessing about outcomes. Situations like Donald Trump’s nomination end-game.

First, there’s the problem of Rule 40(b). It was written into the rules for the GOP’s 2012 convention to keep Ron Paul from being a pain in the neck. The rule holds that a candidate’s name can’t be placed in nomination unless there are at least eight states where the candidate is backed by a majority of the delegates. Ted Cruz says the rule means a candidate can’t be nominated without the eight majorities. Karl Rove says no, the rule just means there can’t be speeches about the candidate before he or she is voted on. The idea was to keep Paul out of prime time, he says.

Under the Cruz interpretation, only Trump and Cruz would qualify for the nomination. Under the Rove interpretation, anyone could have a go. I have no idea who’s right. Given that we’re talking about Rove and Cruz, I might even think Rule 40(b) didn’t exist. But it does and you can see the relevant bit here: “Each candidate for nomination for President of the United States and Vice President of the United States shall demonstrate the support of a majority of the delegates from each of eight (8) or more states, severally, prior to the presentation of the name of that candidate for nomination.” Judge for yourself.

Cruz wants the nomination, Rove thinks the nomination should go to a “fresh face” (meaning none of the people now running). What the press should do is call people who know about convention rules but who aren’t pushing one side or another. Call up enough professors and clarity might emerge. But the demon pass does strange things to a reporter’s head. I find that Sasha Issenberg, writing at Bloomberg, takes a line similar to that of Cruz. “Before the official festivities start in Cleveland, the committee would have to rewrite Rule 40 for anyone other than Trump or Cruz to even be considered by delegates,” he states. Issenberg says the rule decides qualifications for appearing “on a convention ballot.” But, as Rove points out, Ron Paul was voted on at the 2012 convention—his 190 delegates are recorded in the convention’s first and only ballot. So are Michele Bachmann’s single delegate and the one for Buddy Roemer.

Possibly there’s a further twist and votes by these delegates are recorded but don’t officially count toward a nomination. We can only guess. Ben Ginsberg, who was national counsel to Mitt Romney’s two campaigns, says the rule is not in force anymore, that every convention decides what number of states a candidate has to have. But the rule is in force, kind of, says another veteran of GOP convention rules committees: “Rule 40 will likely be amended, but it’s a temporary rule. It’s not nonexistent.” Politico, in reporting what the two men had to say, strolled off from the resulting heap. To rub things in, the second man’s opinions were introduced with the phrase “clarified to Politico.”

All right, if Rule 40(b) can’t be counted on to block runner-up candidates, would it be hard to rig up another rule? The delegates vote on the rules for the convention. One reads that many of the delegates are Cruz loyalists. Of the other delegates, some significant number may be loyal to Trump, given the great many that are pledged to him. The Cruz and Trump forces might throw in together to set a rule excluding other competitors. After all, Cruz and Trump are the drama’s two main actors, and this is the one goal they have in common. If it’s doable, they’ll do it. Is it doable? Please, somebody ask the right people, a lot of them. Then we can see if it makes sense to guess about Paul Ryan getting the nod.

But people go straight to guesswork. The political press loves to wonder, and the murk of the Demon Pass inflames this love. Pretty soon that habit won’t surprise me, but I’m always going to resent it.