Sympathy for the Priebus 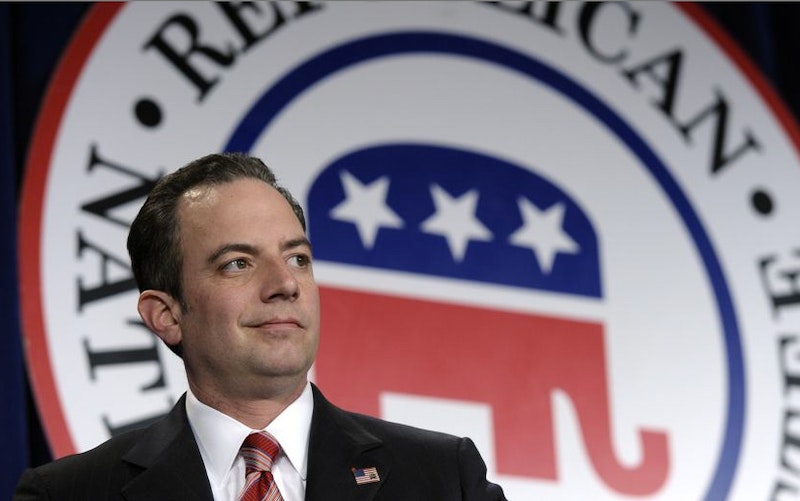 The Republican Party has an urgent problem, and Jennifer Rubin knows what it is: that mouth on Reince Priebus. Honestly, the way he pipes up. The Washington Post blogger lays out the evidence: “Before the last debate, he exhorted the crowd, ‘We are going to support the nominee of our party, whoever it is, 100 percent.’ Then adopting the Trumpkin line, he insisted that any of the GOP candidates would be ‘a world better than Hillary Clinton or Bernie Sanders.’” The little man in charge of the Republican National Committee acts as if millions of party members had voted for Donald Trump. Not only that, Priebus told Fox to never mind when his party’s candidates say maybe they won’t back the nominee—that was campaign talk, he said. Rubin fumes: “The arrogance and moral vapidity are stunning.”

I’d say they’re routine. Priebus is doing what a party chairman normally does, which is paper over disunion. Rubin has a cherished idea of the Republican Party as being her and people who agree with her—“Republicans of good will,” as she puts it. Priebus is laden with that second party, the one that exists outside the bounds of Rubin’s mind. Voters in this second party just handed Donald Trump 20 victories in 32 states. “Priebus would argue that he is just doing his job, trying to keep the party together,” Rubin says, gathering herself for a burst of italics. “He has it wrong: If Trump is the nominee, the party dissolves and Priebus will be presiding over a shell, a rickety remnant of the formerly Grand Old Party.” Oh, really. What happens if, somehow, the guy with the most votes ends up losing? Forget rickety, the remnant will have a hole blown in its side.

Rubin’s premise is that the Republicans can come through okay if everybody says the right thing. Various forces for decency, she tells us, “have built support for the argument that Donald Trump is unfit to serve as president.” Why, Washington Free Beacon editor Matthew Continetti wrote something quite tart about the usurper. Now here comes Reince, “the quintessential bureaucratic man, loyal to an entity but lacking moral discernment.” The little stub opens his mouth, and next thing you know he “has cast Trump as just another qualified candidate, offering his party to a thug who would turn it into an organization dedicated to his cult of personality and authoritarian mind-set.”

Trump is a thug, yes, and he’s authoritarian and he leads a pack of gullible slobs. But gullible slobs make up a big part of the Republican base. Declaring him unacceptable means separating the party from the voters that make victory possible. In effect it means declaring the party inoperative. This is a fact that Rubin will not see. A better man than Reince Priebus might decide he had no business running an outfit so polluted by bigotry and brutishness. But he wouldn’t have been chairman in the first place, not of the Republican Party. “A candidate who incites violence, vows to commit war crimes, doesn’t know that we shouldn’t give Japan or South Korea the bomb (or set one off in Europe), and demeans women and people with disabilities is the worst possible choice for the country and the GOP,” Rubin says. Well, there are 8,197,535 voters who say that candidate is perfect for the GOP. How did those voters get there? Why are they so important to the party? These are questions Rubin can’t process.

Now she thinks the bums will go away if everybody hums the right tune. I see a parallel with the GOP insistence on “radical Islam” as the only phrase that will bring victory. Phrases don’t bring victory, and hissing at Priebus to pipe down won’t change the makeup of the party’s voter rolls. The Republican Party isn’t nearly as nice as Rubin wanted to believe. She’ll never understand that thought. But she can bitch at Priebus for saying the wrong thing.

Priebus lives. Rubin says the chairman “made a spectacle of himself courting Trump… with pledge in hand as he came for an audience with the Donald at Trump Tower.” That was in September, when Trump finally agreed to support whomever the GOP nominated. It wasn’t much of a pledge, since Trump said he could ditch it if he wasn’t “treated fairly.” But Rubin’s mention of “spectacle” reminds me of how Priebus ducked out of the public unveiling of Trump’s signed pledge.

The chairman was scheduled to be up on the platform with Trump, but instead he slipped into Trump Tower, watched Trump sign the thing in private, and then slipped back to Washington. Trump had to show everybody the signed pledge by himself, with no stooge on hand. Considering that Priebus is not tall, and that Trump is a hulk, I think the chairman showed good sense. I also suspect that ducking out wasn’t easy, that he had to insist. Trump is the sort to want stooges on hand.

Now the little man is making noises about how he’ll keep his job, Trump or no Trump. The New York Times reports: “In recent days, Mr. Priebus, who insists that the committee has stayed scrupulously neutral throughout the contentious primary fight, has also let it be known that he does not plan to let the Trump campaign take over the party apparatus if he captures the nomination. At an off-the-record happy hour with reporters last week, Mr. Priebus said clearly that, regardless of precedent, he would not be layered over by Mr. Trump’s loyalists, according to two people present.”

The claim appears in the same article that reports an embarrassing bit about Trump. The Big Anus, paying some visits to Washington’s upper circles, stopped by the RNC offices for a meeting. The RNC chairman had to instruct Trump in the basics regarding delegates (“Mr. Priebus explained that states all had different rules governing how they were selected”), and the tycoon responded to the news in churlish fashion (“Mr. Trump turned to his aides and suggested that they had not been doing what they needed to do”).

This is “according to three people briefed in detail on the discussion.” I’m guessing those three people have something to do with the RNC, not with Donald Trump. Sean Spicer, the committee’s chief strategist and communications director, is not listed as attending the meeting, so I suppose he was briefed and might have spoken with a reporter. At any rate, the people who talked didn’t mind making Trump look silly so Priebus could look good.

How will Priebus defy the big mammal with all the votes? I don’t know. I suppose that, in a time of disorder, he figures the odds rest with someone who knows everybody by name. Trump knows little about the Republican Party, Priebus knows much. On the other hand, why pull the barbarian’s nose in a New York Times article? These are mysteries; the Republican Party is a black box and I’m only guessing.

But good for Reince Priebus. As the gates fall in, he angles to keep his place. Maybe he thinks he’ll be steward to the party. Maybe he just likes his job. If so, that’s politics. At least the fellow sees what’s in front of him. Jennifer Rubin doesn’t, which makes her a thought leader of the Republican Party. The party’s thought leaders aren’t much; I think their hacks are a little better.