The Republican governor is evasive but claims victory. 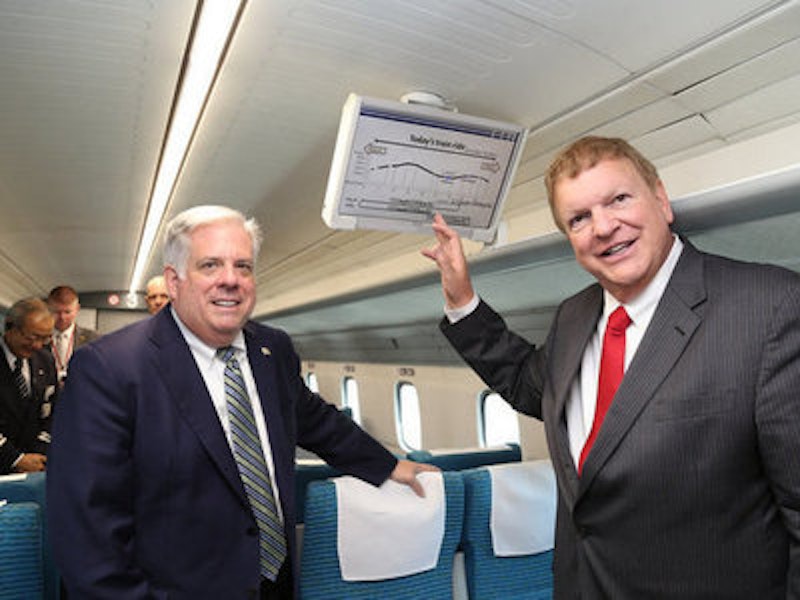 Gov. Larry Hogan has learned what most smart Republicans in Maryland understand—the best way to beat Democrats is to act like one. Hogan has given Democrats and Baltimore city most of what they wanted without leaving telltale fingerprints. And this is the way a General Assembly session ends, not with a bang but a mixed message.

The surface picture appears all smiles and backslaps. But the strong undertow indicates that Democrats are still perplexed over Hogan’s reluctance, or unwillingness, to engage in the traditional dance of legislation that involves communicating and negotiating differences. Instead, he chose, when challenged, to take an evasive action and claim victory.

This executive capriole—jumping up and down with no forward motion—was very much in evidence in the swatch of legislative initiatives that direct hundreds of millions of life-support dollars to Baltimore City. Yes, Hogan said, he would’ve done the same thing, but, no, he would not affix his name to the bills—avoiding a veto that would’ve been overridden but expressing displeasure over the confrontation. He can now act pyrrhic in Annapolis but belittle the legislation and the sponsors on talk radio, as is his double-speak approach.

It was posited at the opening gavel-crack that the 2016 General Assembly would be measured, in large part, by its response to Freddie Gray’s death and aftermath that smudged sections of Baltimore and embarrassed the city on national television or, put another way, an anguished visual cry for help. And now that the Assembly has put up the money, the issue to follow is whether the state and city bureaucracies are prepared and capable of implementing the legislature’s munificent gesture or whether they will bungle the opportunity.

But almost as a codicil to the session as well as a final nudge to legislators, Hogan received a political love letter by way of a Washington Post-University of Maryland poll. His approval ratings are stratospheric, the highest, at 66 percent, of any governor since The Post began tracking standings in 1998. Even 56 percent of Democrats approve of Hogan’s job performance. (The poll did not delineate whether the findings reflected general good will over Hogan’s health and personal problems or heartfelt attitudes toward a job well done.) But in the tight little world of the State House, lawmakers, as in the past, will likely be less impressed by poll numbers as they would be by direct engagement with the Governor to align the number of votes required to pass legislation.

Among this session’s detritus will surely be Hogan’s wish-list proposal to change the way Maryland draws its redistricting maps. Hogan even, in a surely-you-jest effort, tried to enlist President Obama’s help to budge the overwhelmingly Democratic Assembly to see things his way. That would be to turn the redistricting process over to an impartial panel. But The Assembly’s Democratic leaders say either a national plan to have all states adopt that model or let states that are controlled by Republicans (31) go first and Maryland will be happy to follow and, in this case, pleased to be last instead of first.

Every General Assembly session has a rhythm and cadence all of its own. No two sessions are alike. Legislative sessions have only a single constitutionally required function and that is to enact a budget. This session was notable for its restraint but even more remarkable for the number of booby traps and snares that it set for Hogan. He, behaving more as a moderate than the conservative that he is, did not, in most cases, take the bait.

Democrats are faced with the strategic task of conditioning the political environment for a candidate to run against an enormously popular governor in 2018 by attempting to weaken him by forcing unpopular choices. Yet Democrats have no candidate front and center and, for the most part, the pincers movement backfired. Hogan gave the Democrats most of what they wanted.

In addition to the redistricting issue, one of Hogan’s major policy undertakings was the elimination of budget mandates that consume about 80 percent of the budget and require the governor fund programs at the prescribed level or beyond. That was a battle that, from the outset, Hogan was certain to lose. Democrats insist on mandates to make certain that programs they favor receive the money to fulfill their legislative intent.

Another skirmish concerned, of all things, appointments to the Baltimore City Liquor Board. City Senators were displeased with Hogan’s appointments and asked that they be replaced or the appointive power would be shifted to the city. Hogan lost again. Other Hogan patronage appointments were rejected as well. And the legislature also added to the growing list of Hogan’s vetoes that it has happily overridden.

But one of the major protocol standoffs of the session was the legislature’s advancement of a transportation scoring bill. Under this proposal, the State Department of Transportation would evaluate or score transportation projects according to their need or priority. Hogan viewed the bill as an attempt to undermine executive authority. But it was a problem that Hogan created for himself when he cancelled the Red Line rail project for Baltimore and distributed the designated money for highway projects in the counties, some of them considered unnecessary or non-essential. Most counties voted for Hogan and form his broad but thin political base.

And as if to rub in what many considered a deliberate offense to Baltimore, the Board of Public Works last week approved the $5.5 billion public-private partnership contract to build the cross-county Purple Line in Montgomery and Prince George’s counties. The financing is a jig-saw of money sources and the project is based on 40-year-old population numbers. The Purple Line required increased contributions from local governments and subsidies from the MARC fare box. Few, if any, mass transit systems are supported entirely by their fare box revenue. And one difficulty with public-private partnerships is that voters are unable to vote the private partners out of office as they can the elected officials who endorse them.

Hogan has tip-toed around the cultural issues that usually obsess conservative Republicans. His earlier explanation was that issues such as abortion and gay marriage are settled law in Maryland. And following their leader, party members refrained from any unnecessary drama on the floors of the Assembly. The one departure was the appointment to the Handgun Permit Review Board, which issues concealed weapon permits, of a candidate who believes Maryland’s gun law is unconstitutional. The appointee was rejected by Democrats in a questionable vote. And so, as is customary on the session’s final day, both sides declare victory and go home.