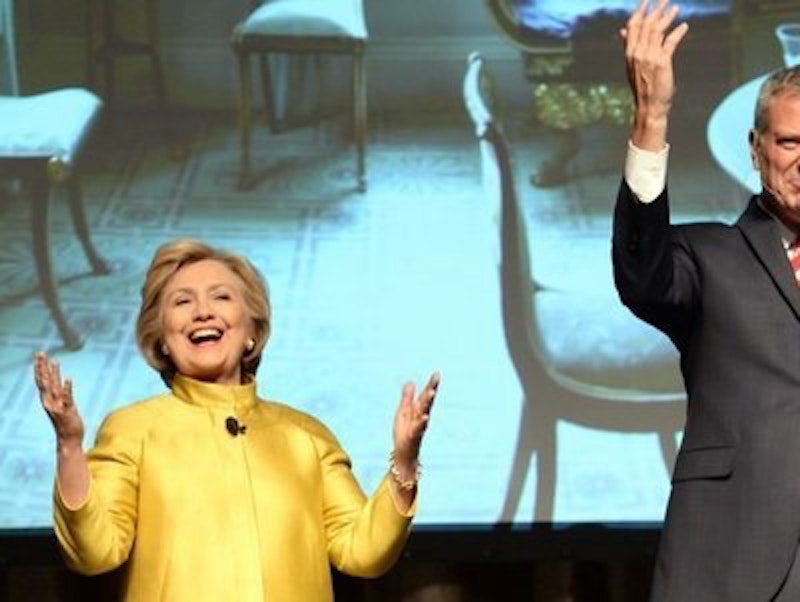 New York City, 3 a.m.—BXXP BXXP BXXP BXXP BXXP goes her first alarm clock. Hillary doesn’t even stir. She needs 12 Ambien and a shot of Demerol just to get in bed, and her manner in the morning is less than pleasant. Huma obviously sleeps in her own room these days, settling for an inflatable plastic simulacrum to cuddle and unwind with. “She was so beautiful the first time I saw her in person…” These days Anthony Weiner’s long-suffering wife has been just miserable—the wind beneath her wings has been busy campaigning full time for nearly a year, and that nuisance of a Jew from Vermont has rattled Hillary’s already fragile psyche. The drugs have slowed the symptoms of her MS but no one knows if she’ll be showing by the time she gets to the debates in October, if she gets the nomination at all. I’ve been working as the former Secretary’s personal assistant and animal alarm clock since the beginning of the year, and the whole team has been in non-stop panic mode. Bernie Sanders—I mean what’s he on? Did Max Jacobson have doctor kids? How the fuck does this guy keep going without any banana peels or rake in the face gaffes? Speed? Bull semen?

The Secretary’s heart can’t take any amphetamines these days, so she’s been a bit foggy and out of step. Responsibility is so dispersed that many, many mistakes have been made this year. “Tell us about your student loan debt in three emojis or less.” At the time, I laughed just like everyone else, flabbergasted that this campaign was so tongue-tied and out of touch, a peculiar reminder of Mitt Romney. The Secretary has been caricatured, but not as an anodyne Richie Rich, instead as a murderous neoliberal hellbent on her own success at any cost. Sure, she’s for gun control now, but what about all those handshake pictures with Saudi officials? It’s a little, uh, sus to say the least.

Sorry if I sound a bit partisan and bitter—I’ve supported Hillary only since she hired me. I was for Lincoln Chafee. Love that guy. Oh, well. Hillary’s people pay okay, and I really don’t have to do much but sleep in the same room as her and wake her up if her symphony of alarm clock apps and devices don’t do the trick. I don’t even know why she still uses them, they never work—I’m the one that wakes up Hillary Clinton every morning. And it always works, except earlier this week—she was really sluggish after an extra night shot, and could barely claw the crow’s feet from her eyes, get out of bed and put her on face. Once I get her in the bathroom with my squawk, I wait for her to shower and get on with the day so I can get on with mine. She takes half an hour in the bathroom before I scratch the door with my spur claw and call for her. “Oh, shut the fuck up, Rooster. I’m running on CP time today.” I didn’t wait for her to finish before I walked out the door, out of the hotel, and went on with my life. I’ll take a lot of guff for a payday (always a nest to fill), but I’m not going to wake up an old battle-axe that casually uses a term like “chicken peck time.” We roosters endure enough abuse. I’m voting for Bernie now.