In defense of aliens, Latinos, and Hillary Clinton. 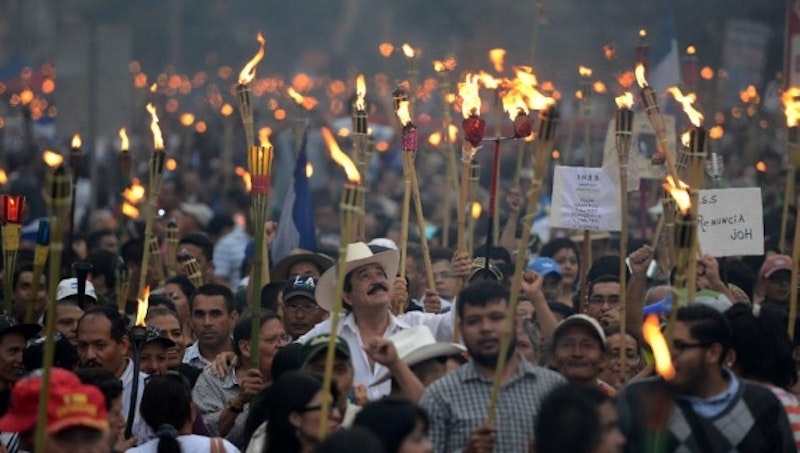 Hillary Clinton has many faults, but condoning the 2009 “coup” against President Manuel Zelaya in Honduras is not one of them. Neither is the ongoing interest of both Clintons—and their advisor John Podesta—in UFOs.

According to the laws of his own country, Zelaya had caused a constitutional crisis with no clear method of resolution besides forcible removal. Having swung far left while in office, he began calling for a convention to alter articles of the Honduran constitution with which he was constitutionally forbidden to tamper, in what was widely recognized as an effort to eliminate presidential term limits and increase his own powers, perhaps pleased by the then-recent example of Chavez to the south.

Furthermore, Zelaya was a flat-out loon who Obama, if anything, stuck by for too long—even as Zelaya began claiming to be subjected to mind-altering gas, radiation, and Israeli mercenaries’ assassination plans. (If he were still in the public eye, perhaps he would echo the conspiracy theorists blaming the Zika virus on Bill Gates-funded genetic modification of South American mosquitoes.) Zelaya had to go, and it made sense for Clinton to urge that process along while she was secretary of state.

Despite Amy Goodman calling her TV show “Democracy Now!” she ends up in the bizarre position of denouncing those like Clinton who called for elections and fidelity to the constitution in Honduras. Well-meaning and anti-imperialist people can still be wrong, as can a pro-Zelaya woman who was tragically assassinated and later lauded by Goodman.

Mainstream media have turned to a significantly more “fun” topic as a way of tweaking Clinton, though. They note that she, like husband Bill before her, has been urged by advisor John Podesta to make the government disclose whatever it knows about UFOs. I am a hardcore atheist/skeptic and have been for over 30 years, not believing any spiritual or paranormal claims—nor much that would qualify as “conspiracy theories”—yet there are some odd, non-ridiculous facts about UFOs that make inquiry into the government’s information on them perfectly reasonable.

Whittle away everything that can be doubted in the vast, often ludicrous mountain of UFO lore, and you’re still left not only with a surprising number of cases in which credible and even expert witnesses saw something that does not seem easily explained by the usual culprits (known meteorological effects, planes, etc.) and are backed by simultaneous radar evidence. More important for political purposes, though, you’re left with numerous bits of evidence that the U.S. government, even while pooh-poohing the topic publicly, has privately gone to great lengths to investigate the topic and then lie about it. Why? Podesta would like to know, and so would you, I’d imagine.

I’ve now memorized a long enough list of UFO/government history factoids to give ample fodder to any of my enemies who want to claim I’m a kook (despite my solid skeptic credentials mentioned earlier), but I’ll just note two here and leave the rest for a longer piece some other time.

The first director of the CIA (which really has been implicated in many of the efforts to control information about UFOs), Admiral Roscoe Hillenkoetter, appointed around the time of the 1947 Roswell incident, sent a letter to Congress condemning the Air Force for concealing extraterrestrials. Was he nuts? Was he simply mistaken, like countless other fallible human beings? You’d hope the director of the CIA knows what he’s talking about. Was he engaged in propaganda designed to frighten the Russians? Or the Air Force? Or the U.S. citizenry? Perhaps as a ploy to distract people from recognizing early intelligence drone flights?

I don’t know, and every explanatory narrative from cover-up to hoax seems to yield a few facts over the past 70 years that don’t quite fit. It’d be interesting to find out.

The phrase “UFO cover-up” sounds loaded and dramatic, I realize, but what would you call it when, for instance, Arizona governor Fife Symington in 1997 publicly laughed at and dismissed claims that lights seen over Phoenix were an alien spaceship—but then said in 2014 in this very brief TV interview that he’d only scoffed at the idea of aliens 17 years earlier to avoid public panic but in fact saw the phenomenon with his own eyes and thinks the massive object was “unquestionably” an alien spacecraft?

Watch that clip and tell me if you think he sounds crazy or confused. There may be no aliens, but I don’t think he sounds crazy or confused, do you? He could still simply be wrong, of course. But regardless of what he actually saw, he has admitted to executing an earlier UFO cover-up here, hasn’t he? I don’t mean to be too harsh on him, since I’m glad he corrected the record, and more government officials should probably do likewise.

If Hillary would like to know more, I don’t blame her any more than I blame Trump wanting more details on 9/11 and the Saudis. I have plenty of other reasons to vote against these people, in short, but not these reasons.