Democrats ought to push common sense rather than revolution. 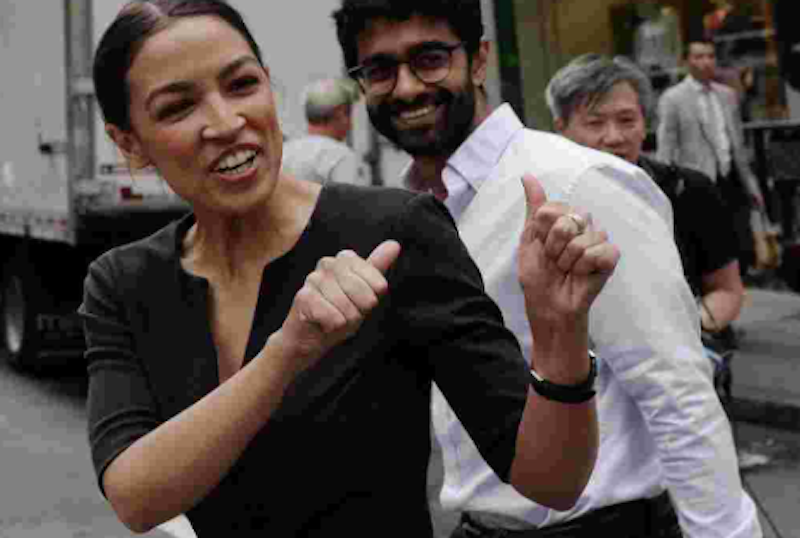 America isn’t one “blue wave” away from a revolution. While it’s possible the Democrats take the House or even the Senate in November, there are far too many politicians on the left who insist on making this task harder. Instead of offering a principled, practical rejoinder to Trumpism, they’re offering a fantasy.

Consider the case of Alexandria Ocasio-Cortez—the 28-year-old democratic socialist who recently defeated Rep. Joe Crowley in New York’s 14th District. If you want to get a sense for how much soggy sentiment is floating around about Ocasio-Cortez’s candidacy, take a look at this column by the New York Times’ Maureen Dowd: “And through this black miasma, one small corner of the galaxy twinkled, offering hope, restoring an audacity, fight and sense of storytelling that had been atrophying in the Democratic Party.”

When she isn’t described as the savior of the galaxy, twinkling in the darkness, she’s outlining a “bold vision for this country in which those who live in it can lead fuller and more dignified lives” and sending a “sobering message to Democrats reliant on big money.” She’s also making Democrats wonder if her victory is “indicative of a broader national movement.”

This is the question Democrats have nervously asked themselves since the 2016 election: will the more radical wing of the party be ascendant in the Trump era? Some people believe this question has already been answered—as Charlie Mahtesian put it in Politico a few months ago: “In state after state, the left is proving to be the animating force in Democratic primaries, producing a surge of candidates who are forcefully driving the party toward a more liberal orientation on nearly every issue.” But Mahtesian also wondered if progressives are doomed to remain an “influential force trapped within a powerless minority.”

An article in CNN Politics describes Ocasio-Cortez’s primary victory as a “shot of pure political adrenaline for progressives hungry to remake the Democratic Party.” The authors note that she has been a galvanizing force for other progressive candidates across the country, such as Ayanna Pressley in Massachusetts’ 7th District and Chardo Richardson in Florida’s 7th District. She has also endorsed Brent Welder for Kansas’ 3rd District and Dr. Abdul El-Sayed’s gubernatorial campaign in Michigan. As Laura Nahmias put it in a recent Politico article, Ocasio-Cortez has “become not just a full-blown political sensation but an international news phenomenon—and she’s leveraging it to the hilt.”

It isn’t difficult to see why Ocasio-Cortez has become a “full-blown political sensation”—she’s an indefatigable, charismatic campaigner. She defeated a powerful incumbent who’s been in office for two decades. She was working at a bar in Manhattan less than a year ago (as Dave Weigel recently pointed out on Twitter, there’s still a picture of her serving customers on its homepage), and now she’s all but certain to become a member of Congress. But despite her remarkable personal story, other Democratic candidates shouldn’t interpret her success as a sign that the country is on the verge of a radical political transformation.

Ocasio-Cortez may think Republicans are “terrified” of her, but they don’t have any reason to be. Her platform—which includes “Medicare for all,” a federal jobs guarantee (including full health benefits, child and sick leave, and a $15 minimum wage), tuition-free public colleges and trade schools, and the abolition of U.S. Immigration and Customs Enforcement—reads like the wish list any naive progressive would implement if he or she could be God for a day. Which means it’s also completely divorced from political reality.

Take just one example: her support for single-payer healthcare.

Has Ocasio-Cortez forgotten about the implacable resistance to the Affordable Care Act, which didn’t receive a single Republican vote in the House or the Senate? Has she forgotten about the aftermath—from the rise of the Tea Party to midterm elections that culled the Democratic majority in the Senate and handed the GOP control of the House? As Norm Ornstein put it in a 2015 article in The Atlantic: “The narrative of Obama steamrollering [sic] over Republicans and enacting an unconstitutional bill that brought America much closer to socialism worked like a charm to stimulate conservative and Republican anger.”

One of the biggest political obstacles to the ACA (both in its implementation at the state level and the fight to get it passed in the first place) was the misperception that, as Ornstein noted, it pushed the United States toward socialism. Does anyone really think an avowed socialist is the best person to lead the fight for single-payer healthcare in this country? Does her vocal support help or hurt the cause?

While Ocasio-Cortez might point to recent polling data that reveal widespread support for the idea that the government has a responsibility to provide health coverage, those numbers are always subject to change. Just five years ago (during the dysfunctional rollout of the ACA insurance exchanges), a substantial majority of respondents to the same Pew poll said the government isn’t responsible for providing health coverage. This demonstrates that debates over public policy (particularly when they’re marred by a whole lot of vitriol and dishonesty) can have a substantial impact on attitudes toward the government’s obligations.

Despite incessant efforts to “repeal and replace” the ACA, its popularity has steadily increased over the past two years. According to the Kaiser Family Foundation, only 38 percent of Americans supported the ACA in April 2016—a proportion that surged to 50 percent by April 2018. And Republican attempts to replace the ACA have been unpopular, with only 17 percent of Americans expressing support for the Better Care Reconciliation Act last summer. A May KFF poll also found that healthcare is one of the most important issues to registered voters going into the 2018 elections.

Now isn’t the time to attempt a massive overhaul of the U.S. healthcare system—it’s a time to strengthen the ACA wherever possible and defend it against the next Republican onslaught. But “Medicare for all” is the first issue listed on Ocasio-Cortez’s website. Considering what we know about the grueling process (as well as the political consequences) of passing the ACA, how should Ocasio-Cortez’s future constituents interpret such a grand campaign promise?

They may want to remember this: Ocasio-Cortez will have 434 colleagues in the House, many of whom she’s working hard to alienate. She boasts about “terrifying” Republicans while backing Democratic primary challengers across the country, many of whom probably aren’t going to win. As Nahmias put it in Politico, this is a “risky strategy for someone who hasn’t even won her own seat yet.” It’s also a risky strategy for someone who actually wants to get things done when she does win her seat (which is all but inevitable).

Meanwhile, Ocasio-Cortez is giving the GOP one political gift after another by calling for the abolition of ICE and posting things like this on Twitter: “No bans. No walls. No fences. No chains. No justice—no peace.” At a time when President Trump is constantly lying about how badly Democrats want open borders, it’s extremely frustrating and counterproductive that one of the most popular Democrats in the country—who DNC chairman Tom Perez just described as the “future of our party”—makes it sound like she’s a big fan of open borders.

Sure enough, a few days after Ocasio-Cortez posted that tweet, Trump had this to say: “The Liberal Left, also known as the Democrats, want to get rid of ICE, who do a fantastic job, and want Open Borders. Crime would be rampant and uncontrollable! Make America Great Again.”

Ocasio-Cortez and her progressive allies think it’s time for a political revolution. But I’d settle for some common sense.