How to Avoid Becoming the Next Red Hen

A guide for handling a Steve Bannon visit. 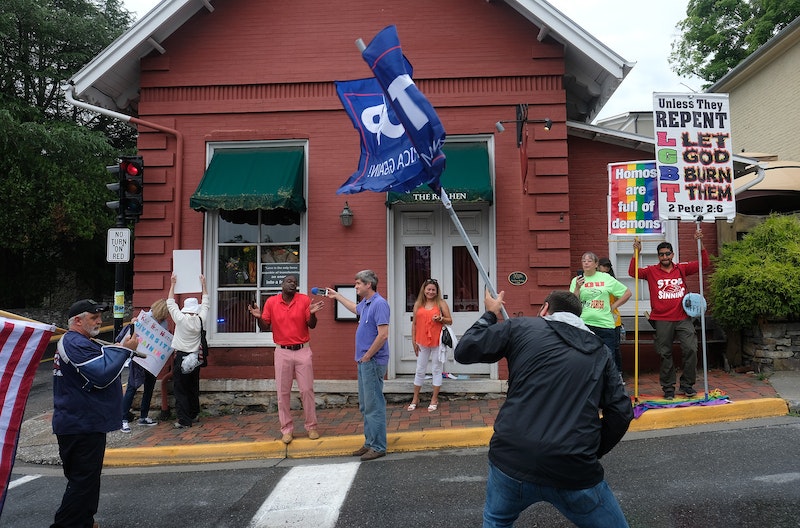 If an obviously hungover man wearing three layers of shirts and sporting several days worth of whiskers on his gin-blossom face enters your business establishment, you need to be prepared. What might soon occur could have serious consequences for your livelihood and peace of mind.

Steve Bannon was browsing in a local antiquarian bookstore last Saturday here in his hometown of Richmond, Virginia when a fellow bibliophile assessed him, to his face, as “a piece of trash,” per the new Democratic initiative to publicly harass Trump associates. The store’s owner made the decision to involve the police in the matter, and with one 9-1-1 call he made his business a national target. Philippe Reines, a former top aide to Hillary Clinton, doxxed him and his business, and the information soon went viral.

The owner of the Red Hen in Lexington, Virginia, who ejected Sarah Sanders from her farm-to-table boutique eatery in June, knows what that feels like, although she sparked her predicament with an anti-Trump act of resistance. Stephanie Wilkinson, who was subsequently forced to shut down her restaurant for over a week, explained that she enforces “certain standards ”...such as honesty and compassion and cooperation” among her clientele, although she revealed no hint as to how she makes such determinations. Anyway, she’s allowed to set her standards, as long as they don't involve race, color, or creed.

Frustrated Democrats are lashing out at prominent Republicans in public places, and those business owners could get caught in the crossfire. As the Bannon incident has proven, this no longer applies exclusively to establishments where Trumpists are loathed.

Not preparing for a potential Steve Bannon or Stephen Miller visit means you risk the wrath of the Internet. Wilkinson said she had no regrets and would do the same thing again. That's her prerogative, but not all proprietors getting caught up in the new political incivility movement are going to be as retrospectively sanguine about a spur-of-the-moment decision.

Perhaps the Fan District book purveyor’s now regretting his phone call, although he said he was simply defending the bookstore as a safe venue for the free exchange of ideas and that he'd dropped a dime on Bannon's tormentor only after she'd refused his demand that she leave. A more prudent option would’ve been to persist a bit longer with her, as it doesn't appear she was either armed or dangerous. She’d have left when satisfied that she'd fulfilled what she believed to be her civic duties, and the Internet would’ve been none the wiser. Getting doxxed today is nothing to trifle with.

Restaurants are in an especially tricky situation when a Republican lightning rod drops in for a bite. Seating one smack in the middle of a possibly hostile crowd carries great potential for mayhem, but exclude them and you run the risk of becoming the next Red Hen and having a bag of chickenshit thrown at your front door.

I've developed a strategic plan, based partially on my years in the business, for restaurant owners wanting to minimize their risk if a Trump bad guy comes through their front door. Outside of conservative bastions like Denton County, Texas, such a visit has tremendous lose-lose potential that requires careful management.

If you choose to serve one of the scarlet-lettered outcasts because you like Trump, you're apolitical, or you believe in bipartisan civility, then prepare for the worst. Try to find a table away from other diners, but how will you handle it if one of your customers gets right in Steve Bannon’s kisser and calls him a white supremacist pig? Calling the cops could mobilize right-wing Twitter against you.

You can take a hard approach, if your conscience requires it, but don't do it the Red Hen way and wait until the social leper’s seated and tucking into a cheese plate. Draw up a list of persona non grata and give it to your staff. If an untouchable shows up, politely explain why you won't seat them and hope for the best. They might announce it on Twitter, as Sarah Sanders did, or another customer could film it and put it on social media. That's the risk you take, so be ready to pay the price if you involve your business in The Resistance.

An alternative approach is keeping the shit list, but don't strictly enforce it. Do what you can to keep the likes of Stephen Miller or Steve Bannon from getting seated. Tell them there's a two-hour wait if it's at peak hours. If that's not feasible and you want to avoid the possibility of kicking the alt-right lunatic hornets’ nest by refusing service, seat them and hope for the best. There are no good choices.

Mitch McConnell got “the treatment” recently at a restaurant, as did Scott Pruitt and Miller after he picked up some takeout sushi. This is part of the Democrats’ culture now, and more incidents are on the way. If you have a business where people come in and spend time, make sure you have a plan in place.