Hope for Lasting Freedom in Russia

Masha Gessen has written The Future Is History as a warning. 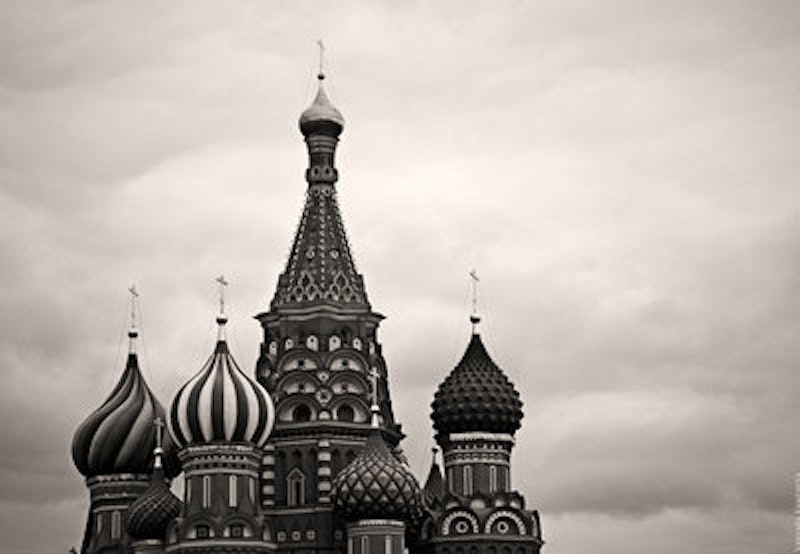 When the Soviet Union collapsed, there was a great wish for a new era of peace and democracy. The hope was that a lasting freedom would be permanently embraced, and a new Russia would emerge. In the decades since, the Russia that’s actually emerged is much like the old, with unwavering authoritarianism.

In Masha Gessen's The Future Is History: How Totalitarianism Reclaimed Russia, the exiled journalist examines the Russian psyche. Observing the failures of Mikhail Gorbachev's reform efforts, Boris Yeltsin's attempt to build a legitimate democracy, and Vladimir Putin's rise to autocratic power, Gessen takes us on a Tolstoy-inspired tour of the recent past. As she describes in the prologue, her aim was to tell "the story of freedom that was not embraced and democracy that was not desired."

Gessen's book begins in 1984, a date rife with Orwellian symbolism, and the beginning of Gorbachev's era of perestroika. In hindsight, this is seen as the beginning of the end of the Soviet regime, where leaders were finally acknowledging that it could not continue as is. Gessen cites Zbigniew Brzezinski's assessment of the paradox that drove the collapse: "[Its] economy had dead-ended, and to survive economically, it would have to reform politically, which would inevitably destroy the state's entire system. But if... the country wanted to preserve its political system, it would fail economically."

The story is told by focusing attention on a small selection of people, most of whom were born around 1984, and shows the reader how tyranny makes the political personal. The Soviet Union began, under Lenin, an assault on intellectualism. By 1922, Lenin deported at least 200 academics and intellectuals on what became known as the Philosophers' Ship, depleting the country of economists, philosophers, and even doctors, among others. Under Stalin, the war on the social sciences continued, limiting access to fundamental works, amid purges and arrests of dissident intellectuals. By the 1980s, the Communist philosophy was a shadow of Marx, filtered through Stalin and subsequent rulers, with "propaganda masquerading as scholarship."

The result was that academics and intellectuals were left with a sparse set of tools to analyze their society: "Not only did the country shield all essential and most nonessential information behind a wall of secrets and lies, it also, for decades, waged a concerted war on knowledge itself." Censorship of outside material was a constant, with inconsistent rules that allow a bit of Sigmund Freud to a few academics, and then banning Erich Fromm. Gessen's subjects describe this time as akin to a Russian cabin that's been sealed off for the winter—it might keep out the cold, but it also keeps out the fresh air. The end result is the stagnant stink of body odor and stale food. The architectural metaphor continues to describe their quest for knowledge as looking for a small porthole to breathe in some fresh air.

Frequent citation of Russian sociologist Yuri Levada and his protégés anchor Gessen's analysis for understanding the lasting effects of totalitarianism. Like Fromm and Hannah Arendt, Levada saw some parallels between Nazism and Stalin's Russia, that molding people is necessary to a totalitarian regime's survival. By rewarding conformity and obedience, and making punishment more brutal, later generations learn to survive by isolating themselves, while also becoming more dependent on the state. Social circles become smaller and more insular because trust comes at a premium. People are expected to remain hyper-vigilant of changes around them, and expected to quickly adapt: "Totalitarianism establishes its own social contract, in which most people will be safe from violence most of the time, provided they stay within certain boundaries and shoulder some of the responsibility for keeping other citizens within the same boundaries."

Beginning his research when Gorbachev's loosened constraints around the social sciences began during the 1980s, Levada named his hypothetical citizen homo sovieticus, and anticipated that as Soviet tyranny faded from memory, the new citizenry would adapt to more personal liberty. The reality was far different. After the coup that brought Yeltsin to power, Russians began to experience the outside world, and were humiliated by the culture shock. Those travelling abroad for the first time discovered that poor people in Western Europe had a better quality of life than affluent Russians. In 1992, Yeltsin legalized private commerce, and the first wave of merchants would conduct business with print-outs of the decree pinned to their clothes in anticipation of police raids that never came. Due to a lack of experience with the free market, con artists found a nation of sitting ducks for their pyramid and Ponzi schemes, not to mention bank fraud running rampant. By the end of the 1990s, a distaste for capitalism began to calcify.

One person who understood that humiliation was Vladimir Putin. As a young KGB agent stationed in what was then East Germany, he found his post spontaneously decommissioned in an ill-prepared operation that left him dumping documents into the furnace on the night the Berlin Wall came down. As the outside crowds threatened to storm the building, his calls to Moscow for reinforcements were met with silence. It was an oversight he couldn’t forget, and would never forgive.

For Gessen's young subjects, the defining moments of change were the tanks in the streets and the television broadcast of Swan Lake on an infinite loop with occasional news updates. The coup wasn't seen as a beginning or an end, but as part of a chain reaction of the seismic events in Russian politics and society. As the 90s wore on, so did the patience of the populace. A pre-perestroika nostalgia settled in, with people clamoring for the Soviet culture of the 1970s. Another shift in society was the end of its social caste isolation. Gessen describes the son of a government official, who had grown up in a fortress, as not "[encountering] a single child outside the top level of the nomenklatura until after the Soviet Union collapsed..."

Citing Fromm, the newfound freedom could be viewed in two ways: "freedom to" and "freedom from." Soviet life had been structured with a finite sense of destiny. While some were able to embrace the new freedoms, most wanted to "escape from freedom." As Levada's protégé, Lev Gudkov, continued the research into the homo sovieticus idea, he found attitudes becoming more nationalistic, patriarchal, and authoritarian. Fromm saw a relationship between an authoritarian mindset and "worship of the past," and, from his research, Gudkov concluded that rising tribalism was a bridge between them.

Russians had a difficult time dealing with the horrors of the past. While formerly communist countries like Poland and Germany could observe the horrors found in KGB documents as artifacts from an occupying force, Russians had no such luxury. As historians tried to make sense of Stalin's era of mass executions, many people built a wall of denial. Adding to the complexity was the discovery that many of the executioners were themselves frequent victims of systemic brutality. Many families who lost someone to those executions would, to preserve their personal safety from the government, destroy any connection they had to the deceased. This meant discarded photos and altered family histories that were traumatizing to reconcile.

By 1999, Yeltsin's erratic behavior and poor health took a toll on public confidence. In December of that year, the transfer of power from Yeltsin to Putin was peaceful, and overseen by the Russian Orthodox Church. This struck some of Gessen's subjects as strange because Putin wasn't a well-known political figure, and the more familiar referred to him as a little gray man.

Putin was adept at tapping into post-Soviet Russia's hunger for a new identity. So was newly-minted philosophe Alexander Dugin, whose work would promote a resistance to what he called "extremist humanism"—the very concept of human rights. Dugin viewed the human rights movement as an ugly import from the West, in addition to arguing that Russia's geography made it the natural enemy of the United States and the United Kingdom. He described his movement as "National-bolshevism," which "is built on the total and radical negation of the individual and his centrality." Dugin's vision was one where Russia would be the leader of an "anti-modern world." He gained national fame with a 1993 television documentary series that indulged his fascination with Nazism and conspiracy theories, which some credit with fomenting anti-Semitism. By 2009, Putin was practically quoting Dugin's words in his speeches.

In the early 2000s, a familiar pattern began to emerge, which Levada called "collective hostage-taking," forcing everyone into the role of enforcer or co-conspirator. Elections, even in the smallest municipalities, had become so corrupt that they could best be described as ceremonial. One of Gessen's subjects described a regional election where he emerged from the voting booth, ballot in hand, and watched as one security officer walked out with the ballot box and another walked in with a ballot box that had already been stuffed.

Putin and Dugin shared a goal in "rescuing" ethnic Russians from former Soviet-bloc countries. Perceived victories in Chechnya and Georgia caused Putin's approval ratings to skyrocket. In the 2004 Ukrainian election, Russia's interference failed to elect a pro-Moscow candidate, dubbed the Orange Revolution. This failure wouldn’t stop Putin from trying to stuff other countries' ballot boxes. The lesson was to be less obvious. Dugin's appreciation for conspiracy theories allowed him to successfully leach the ones involving American financier George Soros while continuing to stir the pot of Russian nationalism. In addition, Dugin would call for the execution of pedophiles while conflating them with gays, instigating a wave of homophobia. More mainstream commentators were concerned that Dugin "had created opportunities for adherents of extreme variants of ultranationalism."

Resistance against Putin has existed intermittently. During the Yeltsin era, Boris Nemtsov was a regional governor and a deputy prime minister. Nemtsov accused Putin as bribing politicians as a way of recruiting them into the inner circle, and then threaten them with arrest for corruption if they were to go against him. A persistent thorn in Putin's side, Nemtsov was arrested several times and survived an assassination attempt before he was finally shot to death on a bridge outside the Kremlin. The activist Alexei Navalny has pushed for corporate transparency and investigations into corruption. Navalny's public life has consisted of multiple arrests and political campaigns whose rallies bring huge crowds yet mysteriously yield few votes. After announcing his 2018 campaign for president, the election commission barred him, citing his numerous arrests.

Gessen has written The Future Is History as a warning. By writing about the rising tide of tyranny that she witnessed, and in finding parallels in the work of people who saw the same tides in the rise of Stalin, Hitler, and Mussolini, we can see the psychological warfare afoot. Because of the timing of this book's release, it's easy to look at the current abnormalities of American politics and find some similarities. The necessary lesson is that "any ideology could become the basis of a totalitarian system if it could be encapsulated and coupled with terror. The terror was used to enforce the ideology but also to fuel it."