The Bible is the “word of God” except when it conflicts with your politics. 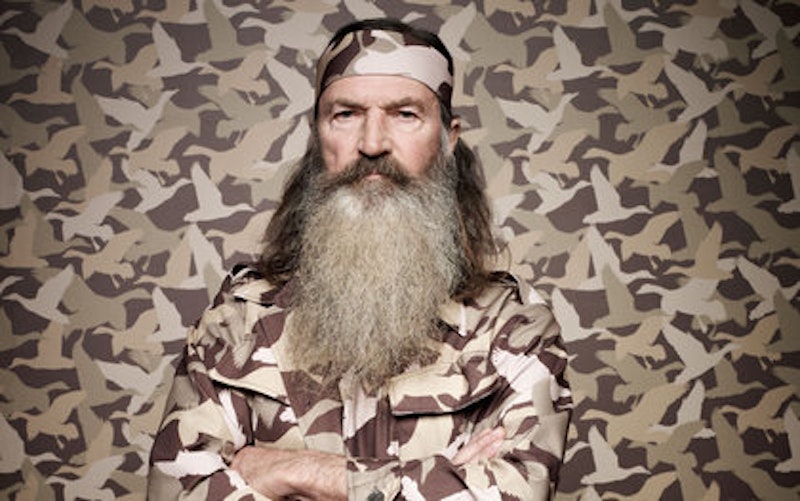 Phil Robertson—the knuckle dragger of Duck Dynasty—is the most truthful and accurate representative of Christianity’s position on homosexuality in the public eye. More than liberal Christians who try to have their wafer and eat it too (the Bible is the “word of God” except for the parts that conflict with their politics), and more than the hypocritical and hollow Pope who makes a few friendly statements about gay couples, but does nothing to alter the anti-gay policies of the church he leads, Robertson had the highest degree of Biblical authority when he compared homosexuality to bestiality and paraphrased Paul’s letter to the Corinthians: “Don’t be deceived. Neither the adulterers, the idolaters, the male prostitutes, the homosexual offenders, the greedy, the drunkards, the slanderers, the swindlers—they won’t inherit the Kingdom of God.”

Upon reading Robertson’s recitation of medieval superstition and bigotry, one is immediately reminded of Nietzsche’s warning about heaven: “It is missing all the interesting people.”

Regardless of of personal devotion to any “faith,” one is also made to reflect on how Western religion survives, socially and politically, only because secular forces and values succeed in civilizing it.

It is easy to condemn a foolish reality television star for making foolish remarks, and many organizations, from GLAAD to his own network, A&E, have done just that, but no one in polite society is willing to state the obvious: If Phil Robertson is homophobic it is only because the book that he, along with millions of Christians, believe is “holy” and “divinely inspired” is also homophobic.

Not one critic of Robertson disputes the veracity of his Biblical interpretation and translation. The Bible unequivocally denounces and damns gay people for their sexual orientation, sentencing them to an eternity full of torture and torment in the “lake of fire.” Sharing their cell in the underground dungeon are people who work on the Sabbath, for whom the Bible recommends execution as earthly punishment, and women who have sex before marriage. They ride the highway to hell after they are stoned on the front steps of their fathers’ houses.

Anyone who recites the barbarism of the Bible to believers will likely incite laughter and quick dismissal on the grounds that he, being a heretic, doesn’t know the first thing about Biblical interpretation, but the scriptures say what they say, and like Robertson, they say it without confusion or apology. It’s liberal defenders of Christianity who should suffer a conscience of crisis, and who have all their work ahead of them.

Robertson, oddly enough, is refreshing for his honesty, and the only genuine critics of him are those who understand that it is impossible to reject Robertson without rejecting the Bible.

The real conflict, intellectually, is not between those who believe the tax-paying, law-abiding, responsible, and generous gay couple poses no threat to their neighbors or society, and those who believe they are morally depraved spawns of Satan dedicated to destroying the sanctity of marriage. It’s between those who believe that the Bible is the “word of the Lord”—infallible and inalterable—and those who see it for what it is, a collection of mythology, genealogical history, poetry, and philosophy, that, despite occasional flashes and phrases of brilliance, reflects the ignorance of the men who wrote it, and the age of its publication.

Any Christian who aspires to friendship and alliance with gay people should welcome the Duck Dynasty controversy as an opportunity for deep introspection and self-examination. Belief in Biblical authority and support for gay rights are mutually exclusive. Any attempt to reconcile the contradiction is untenable without some serious schizophrenia. More likely than the correct diagnosis of the sickness and dissonance of liberal Christians, and the loss of faith that should follow, is that the Bible’s homophobia will vanish into the same void that took the Bible’s sexism, anti-Semitism, and tribalism out of mainstream theology.

Just as it’s no longer polite to remind Christians of the Biblical advocacy of capital punishment for weekend employees, it’s also uncivil to quote Paul of Tarsus when he forbids women from speaking in church or to recite Jesus’ own words in the Gospel of John, calling Jews the “children of the devil.”

It isn’t that those passages no longer exist in the Bibles that take up space on bookstore shelves, at the end of church pews, and in hotel drawers. It is that Christians no longer acknowledge their existence, because, like non-Christians, they are uncomfortable with them. Unlike non-Christians, however, their discomfort should provoke unwanted embarrassment and self-criticism.

It was through the heroic efforts and struggles of secular society that women and Jews gained fully human status in Western Culture. Christianity had to catch up. The fight for freedom for gays is another chapter in the same story. Over the past 50 years, America has made tremendous progress on gay rights because of political activism, pop culture provocation, social advancement, and legal triumphs. Once again religion is limping behind, but it will eventually meet everyone at the destination of sanity and decency with its survival secure only because of secularism’s sophistication and tolerance.

Any credulous Christian who doubts the need for religion to have the civilizing influence of secular values might spend some time living in the unbalanced theocracies of the Middle East. Their unleashed religious bullies and bigots make Phil Robertson look like Gore Vidal.