Why not let a burnt-out pundit test views on marijuana legalization? 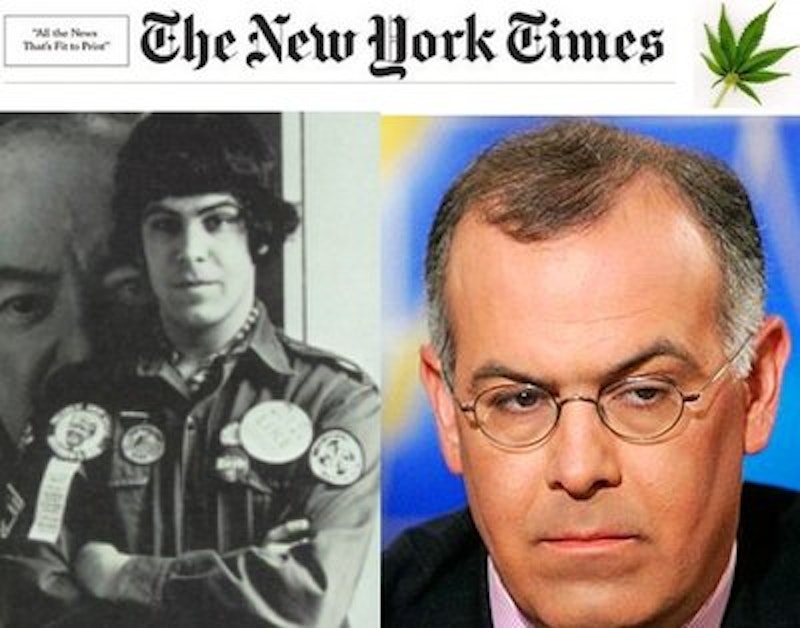 David Brooks’ moralistic column in The New York Times about marijuana legalization last week was instantaneously, and justifiably, ridiculed on every social media site you’ve ever heard about. The volume of disparaging posts on Twitter almost rivaled that of the NLF playoff games over the weekend; the parodies, which could be written in one’s sleep, took over Facebook. Disproving the time-worn adage that “There is no such thing as bad publicity,” Brooks, on thin ice for years, is now a laughing-stock in the media industry. Talk about rich, elite white men dispensing advice to the lower castes of American society.

So, it was yet another occasion to poke fun at the widely-mocked Brooks—he never did quite fulfill his goal of becoming this generation’s Gail Sheehy—yet the column was so ludicrous I couldn’t take it at face value. Something else was bubbling, and the answer came soon enough, Jan. 5, when a Times editorial, “The Marijuana Experiment” was published, taking a very critical stance on the rapidly moving trend in states across the country that have either legalized pot or are in the process of doing so. The Times editorial board is clearly against such a populist movement—even though: abortion, check, gay marriage, check, unisex bathrooms, coming up—and it’s my guess that one of Brooks’ superiors at the paper suggested he write such an essay to gauge opinion. Otherwise, why would the editor who presumably reads Brooks’ columns before they’re published leave him open for such scorn?

Marijuana legalization—or decriminalization—is an issue that gains supporters every day, so the Times triumvirate of publisher Arthur Sulzberger, Jr. (62), executive editor Jill Abramson (59) and editorial page editor Andrew Rosenthal (57) knows the paper will have to take a more definitive stand in the coming months, particularly since New York’s governor and possible Democratic presidential candidate Andrew Cuomo has proposed the very minor step of allowing medicinal marijuana in 20 hospitals across the state.

The 52-year-old Brooks is so irrelevant today—he’s beyond the “taking one for the team” category—kind of like a mostly washed-up baseball player like Michael Young or Raul Ibanez looking for a final couple of million bucks—that he’s the obvious patsy for such a mission. You can hear Brooks at a dinner meeting with his superiors, mouthing the words of Ray Davies’ song “Yes Sir, No Sir” from the Kinks 1969 masterpiece Arthur (assuming he’s heard of the Kinks): “Yes Sir, no Sir/Permission to speak Sir/Permission to breathe Sir/What do I say, how do I behave, what do I say.”

There are so many daft paragraphs in Brooks’ column, but here’s one that caught my eye: “I’d say that in healthy societies government wants to subtly tip the scale to favor temperate, prudent, self-governing citizenship. In those societies, government subtly encourages the highest pleasures, like enjoying the arts or being in nature, and discourages the lesser pleasures, like being stoned.”

I can’t think of any U.S. government, either at the federal or state level, that pays more than passing lip service to “enjoying the arts or being in nature.” That’s more of a notion that’s bandied about by Grey Goose-sipping Big Thinkers like Brooks in their limited social circles. Which reminds me, the word “alcohol” doesn’t appear once in Brooks’ column, an astonishing omission not only because of Prohibition’s failure, but also because marijuana is far less destructive than booze. When you’re on the road, what motorist scares you more: one who’s blotto from the bottle, someone who’s texting while driving, or a person who’s stoned and driving below the speed limit? Cell phone yakkers and texters give me the willies—more than drunks—because they’re driving during rush hour when the odds of an accident are far greater than after sundown.

It doesn’t really matter that Brooks, who probably exaggerated his pot use in his “silly” teenage years, wasn’t the best expert on the subject of legalization that the Times could find. Likely, he was willing to be the guinea pig, to do his bidding for the men and women who allow him a national platform that translates into wealth and (diminishing) status in the Beltway/NYC crowd. It’s hard to imagine Paul Krugman—who has his own problems of repetition and left-wing zealotry—even entertaining such a request from Rosenthal, Abramson or Sulzberger. He’d probably tell them, “Fuck you, I’ll take my column to Politico.”

Brooks doesn’t have that kind of leverage. And so he was left to take the fall. And soon enough, when he’s outlived his purpose, put out to pasture, he’ll put on a brave face and recall his Times experience with a wan “Been There. Done That.”