Forgetting how to hate the Jews. 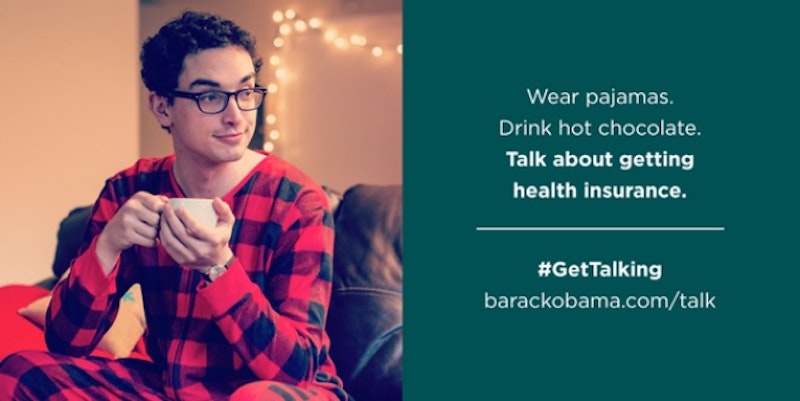 Last week, the right's five-minute hate was directed against pajama boy, a guy in an ad encouraging young people to sign up for Obamacare. I usually don't pay much attention to the right's vitriol, but I happened to click through on this one, and was somewhat startled to discover that this random guy looks kind of like me. I've even got a onesie that looks a bit like that (my son calls it a sleep-skirt.) And the curly hair, strong features, prominent nose, sharp eyebrows, glasses… yep. He's younger and more handsome, but there's a similarity. Which is to say that he, like me, looks Jewish. And just to drive the point home, some anti-pajama-boy memes apparently post a "How did you know I went to Oberlin?" tag across the picture. I went to Oberlin, which is known both for being a very liberal school, and for having a sizeable number of Jews in its student body.

National Review editor Rich Lowry sneers that pajama boy is "so nerdy he could guest-host on an unwatched MSNBC show." The slur isn't exactly surprising: Jewishness and nerdiness are often conflated, or equated (see Woody Allen or Howard Wolowitz.) Assimilated or model minorities are generally seen as unmanly; what happened to Jewish males is now happening more or less to Asian males.

I guess I could accuse Lowry and the right in general of anti-Semitism. But the truth is, I don't think that that's exactly what's happening. In the same paragraph where Lowry sneers at pajama boy's nerdiness, he writes that the guy is "probably reading The Bell Jar and looking forward to a hearty Christmas meal of stuffed tofurkey."  He's plugging into stereotypes around Jewish appearance (nerdishness, Oberlin), but those stereotypes adamantly don't for him link to Jewishness. He knows pajama boy is nerdy, he's catching the cultural signs rooted in ethnic difference, but he doesn't link those signs to ethnic difference in any way. It's not even clear he knows where they come from.

Again, you could see this as indicative of the persistence of anti-Jewish sentiment and stereotypes. But to me it’s more like a sign of how marginalized and defanged anti-Semitism has become in an American context. We're beyond a dog whistle here; the prejudice has been severed from its original ethnic target. Lowry and the right do not see that this man is Jewish. The fact that he may well not be Jewish simply underlines the point. Prejudice creates a stereotyped view of what Jews look like. That's gone. So when confronted with a guy who looks Jewish, Lowry doesn't immediately think he's Jewish, which he may not be. Stereotypical Jewish features still provoke a shadow of prejudice, but they don't any longer link to "Jewish." People who say, "I don't see race," are pretty much full of crap—but it's different when you talk about Jews. People really don't see them. They don't have preconceptions about what they look like; they don't assume that someone who looks like a Jew is a Jew. At worst, they see somebody who is kind of nerdy. But the original ethnic basis for that nerdiness is gone.

It's not pleasant to realize that a significant number of people think that my looks alone make me an object of ridicule. I'd thought I'd stopped having to deal with that after high school. But I basically did stop having to deal with it. Even these people who clearly are trying to be as nasty as possible aren't able to figure out what my looks mean, much less connect them to an actual systematic program aimed at making the lives of people who look like me miserable. As pajama boy, I face no prejudice. I can work where I like, marry whom I like, even make policy at a conservative think tank, if that's my bliss. Hate lingers, but it loses a lot of its sting when it can't remember whom it’s hating.