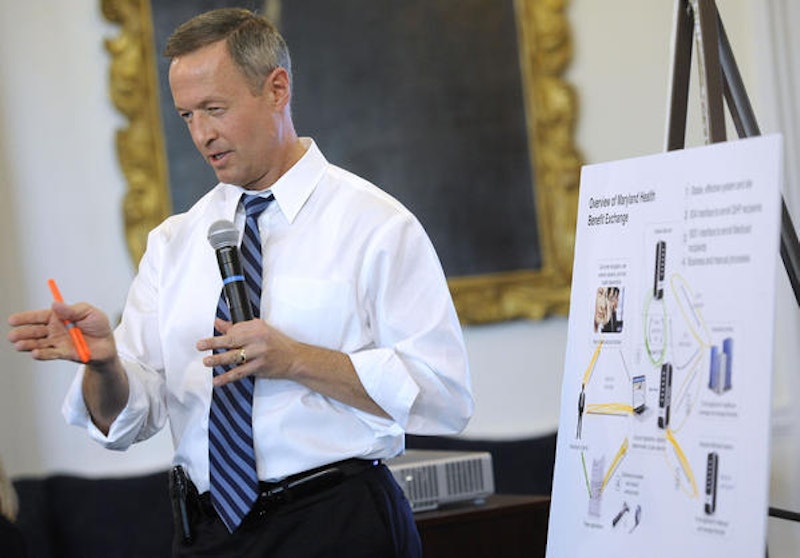 Here’s a surefire get-rich-quick scheme just in time for the season of giving: Get a government technology contract and screw it up. The check will be in the mail regardless.

Obamacare is now O’Malleycare. They’re fungible commodities, made of interchangeable parts, like two piano keys, ebony and ivory. Maryland Gov. Martin O’Malley (D) now owns the botched and bungled healthcare debut, whether he likes it or not, and the smudges of failure are likely to stick to Lt. Gov. Anthony Brown (D), like Lady Macbeth’s damned spot.

The crash-and-burn launch of Maryland healthcare program could be a potential setback for O’Malley’s nascent presidential ambitions. Brown, who was in charge of the plan’s implementation and its dismal performance, has been hammered relentlessly by his principal rival for governor, Attorney General Douglas Gansler (D). Gansler has gone so far as to say the Maryland rollout resembles a Saturday Night Live sketch.

Baltimore Mayor Stephanie Rawlings-Blake owns a piece of junk technology, too—a failed speed camera system that was enriching the city to the sonorous tune of $1 million a month in fines until motorists began scratching their heads and challenging the system over suspicious tickets.

The Administration of President Obama has spent anywhere from $500 million to $1 billion—depending on who’s doing the counting—on a Rube Goldberg computer program that backfired on its users (as well as Obama). The original $634 million contract was awarded to CGI Federal, a company no one had ever heard of, in 2011 and was originally intended to cost $93.7 million. One report said the contract involved a college friend of First Lady Michele Obama. Since the Obamacare award, it has been reported that CGI has won five more federal technology contracts worth $7 million.

Since the Nov. 1 launch, Obama has recruited two additional technology managers, Jeffrey Zients and now former Microsoft executive Kurt DelBene, and another company, Optum/QSSI, of Columbia, MD, to fix the mess. He should have just turned the entire project over to Amazon.com in the beginning.

Obama’s poll ratings have dipped proportionately. A recent Washington Post poll shows that 62 percent of those surveyed disapproved of Obamacare while 42 percent believe that he should not be in charge of implementation and 42 percent want him to continue. His overall performance rating as president stands at 42 percent. Obamacare appears to be coming apart before our very eyes.

So here’s Obama, expounding the obvious in a paragraph buried deep in The Washington Post: “During a West coast fundraising swing last month, Obama told several high-tech donors that HealthCare.gov’s botched launch had convinced him that he needed to overhaul the way the federal government issues contracts for technology projects.”

Maryland is one of 15 states that chose to bypass the federal website and establish its own health insurance exchange, mainly because O’Malley was seeking bragging rights for his tech-savvy state. Maryland was one of the first states to win federal approval for an in-house launch and the state was widely praised for its readiness.

The O’Malley Administration spent $106 million, perhaps needlessly, to replicate, if not exaggerate, the bungled federal rollout of server crashes and screen freezes. The prime contractor on marylandhealthconnection.gov was Nordian Healthcare Solutions which has blamed many of the malfunctions on a sub-contractor, EngagePoint, Inc. The lawsuits are flying like snowflakes in December.

So now O’Malley, who says nine fixes have been made to facilitate the application process, has authorized an additional $4 million to recruit Optum/QSSI—the same technology rescue company the federal government has signed up—to refresh the website under a two month contract. All insurers writing health care policies in Maryland have agreed to extend the application deadline until Dec. 27. (The Obama Administration has waived the individual mandate for a year for those who have lost their policies under Obamacare. According to one report, this is at least the 14th exception to the law which is not yet fully effective.)

The O’Malley flub is all the more embarrassing because Maryland likes to boast that it is one of the top high-tech states in the nation, rivaling California and Massachusetts, and that Montgomery County has the largest concentration of PhD.’s on the planet. And it must really rub O’Malley raw that the most successful healthcare launch in the nation occurred in, of all the surprising places, Kentucky. Kentucky spent $100 million on its sign-up program that included a massive ground effort to reach the uninsured in the hills and rural areas of the Bluegrass state. Kentucky is not all stables and racetracks.

Yet Maryland Rep. John Delaney (D-6th) has observed repeatedly: “It just strikes me that the technological issues of pivoting to the federal site may be less than fixing the state site.”

Baltimore and its mayor, with legal sanction from the state, thought they had found a cash cow in speed and red light cameras. The original system, installed by Xerox, was a pluperfect disaster in that it was ticketing ghost cars and placing motorists in parts of the city they had never visited. What’s more, Xerox was collecting a bounty on the number of cars that it ticketed which was a violation of the state law authorizing speed cameras. The city paid Xerox $2.3 million to end the arrangement.

So the city replaced Xerox with Brekford, of Hanover, MD, less than a year ago to install new hardware under a five-year contract. But the new cameras were just as inefficient and inaccurate as the old. The solution: Buy out the Brekford contract for $600,000. Rawlings-Blake insists that she likes the idea of speed cameras and will pursue the controversial enforcement-revenue tool until a suitable vendor is found and the city can resume collecting $1 million a month in easy money.

Government technology is geek culture for high-salaried adults. The federal government spends billions every year on technology contracts. And Maryland’s Board of Public works awards $2 billion a year in contracts. Often technology companies begin with a single person who is angling to get rich at taxpayers expense. And too often government officials succumb to the seductive lure and the blandishments of what basically are a breed of hustlers and hucksters known as “Beltway bandits” who populate the nation’s capital as well as America’s state houses.

The reverse of the procurement process is that government officials like the latest technological toys as much as any child and, in a sense, need them to keep pace with the people that they govern with the latest technology. They are, after all, they way we conduct much of our business with government these days. The National Security Agency, for example, spies on average Americans for no reason other than it has the technology to do it.

Procurement officers are more often awed by the credit-card treatment they receive than by the specs before them. A man with a simple computer can be fashioned on paper or a proposal to resemble Bill Gates or Steve Jobs. The seller often has more expertise than the buyer. Caveat emptor is a cautionary lesson for government procurement officials as well as individual consumers.