Dangerous precedents have been set, eroding American freedom and turning the U.S. into a surveillance state - but it would get much worse if a Tea Party candidate was elected. 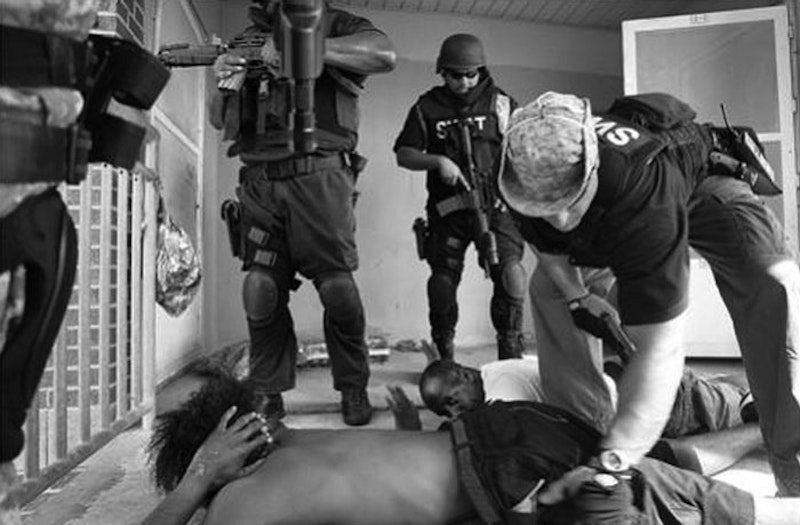 The United States is still the freest country in the world. I can write critically of the government and not feel threatened. I can walk down the street and not worry about being stopped by a cop for no reason. But our freedoms are in serious jeopardy. It’s well known that George W. Bush cynically rammed the Patriot Act, among other measures, through Congress with no public debate only a few weeks after 9/11, creating a surveillance state and suspending habeas corpus. But under President Obama’s watch matters have arguably gotten worse, and the new crop of Tea Party presidential candidates, such as Rick Perry and Michele Bachmann, are terrifying.

In spite of insisting during the presidential campaign that we must restore civil liberties, Obama has kept nearly all the worst excesses of Bush’s surveillance state in place, expanding them in some cases. The massive network of privatized spy agencies continues to monitor Americans with no oversight, torture has not been eradicated, as the administration has established torture chambers in Somalia, and Obama has fought to increase government secrecy privileges. Furthermore, Obama has brought more criminal cases against whistleblowers than all previous presidents combined, and his attack on WikiLeaks is particularly ominous in this regard.

The FBI has expanded its powers under Obama, now reserving the right to spy on you, obtain your personal information through commercial databases, and pick through your trash without any evidence or suspicion of wrongdoing, perhaps to coerce you into becoming an informant against someone they don’t like. Scott Crow, an anarchist and activist, has been subjected to these enhanced surveillance techniques for years, and he’s borne the brunt of excesses typically found in dictatorships—government agents monitoring his home, reading his emails, listening to his phone calls, infiltrating meetings with activists.

More broadly, government has dramatically increased the rate at which it breaks into peoples’ homes. The feds conduct over 40,000 raids per year in which they burst into someone’s house with a SWAT team, search for private information and arrest people. Their favorite targets are poor, urban communities. In one case they murdered an Iraq war veteran while raiding his home during a narcotics investigation. As Carlos Montes’ story illustrates, they love to go after activists.

He describes the horrifying scene as follows: “I thought someone is breaking in, somebody is trying to jack me up,” he said. “I was a victim of an armed robbery in December of 2009 in my home. I do have a gun in my bedroom for self-defense. I was startled. I jumped out of bed. I saw lights coming from the front-door area. They looked like flashlights. I saw men with helmets and rifles. I gravitated towards the front door. I didn’t take my gun. I could have done that. I have it there. It is a good thing I didn’t pick anything up and put it in my hand. I yelled, ‘Who is it?’ he said. ‘They said, ‘The police. Carlos Montes, come out’ or ‘come forward,’ something like that. I approached the entryway. They rushed in. They grabbed my hands. They turned me around. There were two police officers on each arm. They brought me out holding my arms. I have a little patio. They handcuffed me and patted me down. I am on a little hill. I looked down the street and [it was] full of sheriff’s vehicles, patrol cars and two large green vans. They were bigger than vans. People could stand in there. They didn’t have any logos on them… I thought it was an Army truck at first. Later on I found it was from the sheriff.’”

The Supreme Court, in line with its long shameful record of serving power, has permitted these types of draconian crackdowns to occur, as a little known but scandalous ruling, Kentucky v. King, shows. A few months ago, police officers in Kentucky chased a suspected drug dealer into an apartment building. Once inside, they lost track of their suspect but smelled marijuana. When they knocked on the door from which the smell came, they allegedly heard noises they perceived as destroying evidence. Accordingly, they burst through the door, caught the man flushing marijuana down the toilet, and arrested him. Even though the Kentucky Supreme Court had overturned the man’s conviction, the federal Supreme Court overruled and upheld the conviction.

This sets an extremely dangerous precedent.  Now, if the police knock on your door and decide that you are destroying evidence, they can break into your home without a warrant.   As Justice Ruth Bader Ginsburg explained in her lone dissent, this ruling “arms the police with a way routinely to dishonor the Fourth Amendment’s warrant requirement in drug cases. In lieu of presenting their evidence to a neutral magistrate, police officers may now knock, listen, then break the door down, never mind that they had ample time to obtain a warrant.”

But this is not the only ominous attack on freedom we’ve seen from the Supreme Court of late. Free speech is also under assault. In 2010, the Obama administration filed a claim asking the Court to ban providing “material support” to organizations listed as terrorist groups. In Holder v. Humanitarian Law Project, the Court prohibited giving support of any kind to a Turkish group considered a terrorist organization by the State Department. Human rights workers can now be sent to prison for up to 15 years even for trying to persuade extremist organizations to pursue peaceful, lawful objectives.

What’s so frightening about this ruling is that the State Department, not Congress or the Courts, determines which groups are and are not terrorists. And their methods are totally arbitrary. Consider that Saddam Hussein was on the terrorist list for years until President Reagan decided in 1982 to remove him from the list because America supported Iraq in the war with Iran. Hussein would go on to commit his most notorious atrocities, such as gassing the Kurds, with full U.S. support (until he made the fatal mistake of invading Kuwait in 1990). So if the State Department wanted it could decide tomorrow that the ACLU or the Heritage Foundation is a terrorist group and arrest anyone who provides these organizations with “material support.”

While this is one of the biggest attacks on free speech in U.S. history, things have gotten a lot worse in the past few weeks. In July, a Bay Area Rapid Transit (BART) police officer shot a homeless man named Charles Blair Hill to death on the platform of a train station. When people organized a protest of the murder weeks later, BART cut off cell phone service at four underground stations to crush the resistance, claiming they were allowed to resort to such measures to prevent train delays. This is the first time any American government agency has ever used such a tactic domestically. If we permit BART to violate our rights like this we will set a precedent for our government to apply methods frequently practiced by dictators in the Middle East, such as Hosni Mubarak.

As awful as all this may be, Obama is nothing compared to what would happen if Tea Party presidential candidates Michele Bachmann or Rick Perry were to make it to the White House. These people are extremely dangerous. They are the face of the Christian Right. Both Bachmann and Perry are backed by the most terrifying, extreme elements of the movement. If either of them were to become president, America could become an all-out theocracy. As Frank Schaeffer, a former leader of the Christian Right has warned, Bachmann is the product of a “Reconstructionist, Dominionist movement, that honestly, in the best of all worlds, as far as they’re concerned, would replace American democracy with a theocracy on a Christian level that would mirror something like modern-day Iran after it fell to the Ayatollah Khomeini.”