Up Mitt's Creek Without A Paddle

Following the Republican debate in Iowa, it's becomd clear that Mitt Romney doesn't have the faux grassroots popularity of Bachmann or Perry, and as the "candidate of Non-Crazy," doesn't stand a chance in the battle for the nomination. 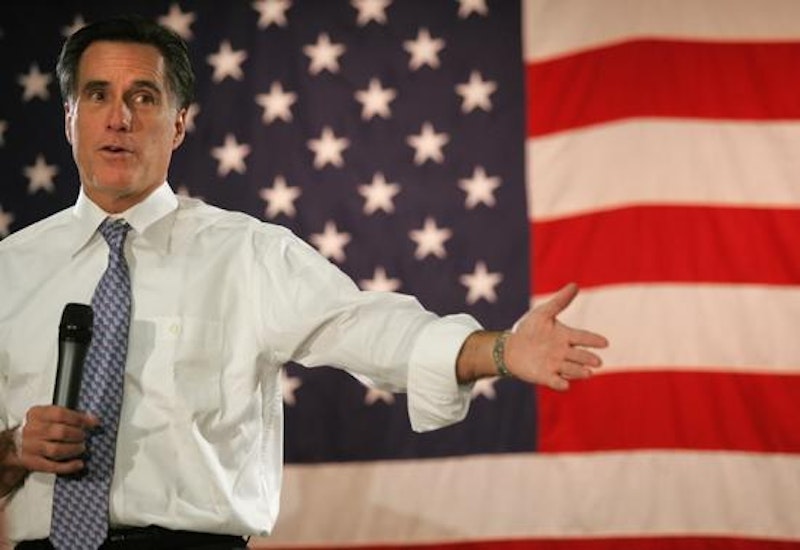 Onetime Minnesota governor Tim Pawlenty has left the building, the building of the Roadhouse of Right-Wing Angst that is the campaign for the Republican nomination for president. Dude couldn’t hang in a field now populated by Texas governor Rick Perry; dude couldn’t out-crazy or out-high road fellow Minnesotan Rep. Michele Bachmann; and dude just couldn’t land a decent punch on perennial cold piece of milquetoast Mitt Romney. It’s a classic case of positioning oneself as a viable centrist in a general election, forgetting that one needs to summon the demons of the right-wing grievance factory in order to win a primary (speaking of primaries, you’ve got to love the fact that Florida Tea Partiers want to primary Allen West, about as deep-gong-on-a-Himalayan-mountaintop crazy as it gets for the Republicans).

Romney is now the Candidate of Non-Crazy, and is almost certain to lose the battle for the nomination, mainly because, under his watch, Massachusetts enacted an individual mandate for health care that, in a different time and under less spittle-filled auspices, was a firmly mainstream Republican plank.

The front three are Bachmann, Perry and Romney, with the ever-ubiquitous Sarah Palin as an x factor that, if she were to eschew the lucrative profession of being ridiculous and get into the race, would almost certainly doom any and every Republican on a ballot in 2012.

When all 10 candidates for the Republican nomination raised their hands at the most recent debate in Iowa, it was in response to this: who on stage would reject a budget deal that, for each single dollar in additional revenues (read: taxes or closed loopholes), there would be $10 in spending cuts. Every. Single. Candidate. Voted. Yes.

It’s perhaps as good an example of any of the psycho-political difference between this country’s two major parties: liberals/progressives/Code Pinksters and Move Overs are, ultimately, subservient to the centrist galleon captained by the Barack Obamas and Ben Nelsons of the Democratic Party; Tea Partiers/evangelicals/Limbaugh Nation succeeds, time and time again, at dragging the Republican Party to the fringes of political reality, to the point where Cranky John McCain lashed out—awkwardly—by calling them hobbits.

The debt-ceiling fight brought to a head the nihilism so pervasive in Republican politics: here we have a massive debt and deficit, the result of President George W. Bush’s unfunded wars, tax cuts, and entitlement expansions, and a still-yet-to-be-fully understood Great Recession. President Obama ratcheted up the spending with a stimulus package that kept the country from actually hitting the bottom of whatever barrel contains the global economy, as well as enacting health care reform that does more to reduce health care spending than any piece of legislation in a long, long time. When Senate Minority Leader Mitch McConnell of Kentucky embraced the “hostage” metaphor in regard to the debt ceiling, he solidified—in as honest and direct a fashion as you’ll see on Capitol Hill—the sheer nihilism of the Right. Obama loses—that’s all that matters. Default, unemployment, these things are of a limited and second nature to the primary purpose of beating Obama and the Democrats. There’s no other way to spin it.

The Republican nomination process, one that moved at an interminably glacial pace, is now in full swing with Perry in the race. The guy shot a fucking coyote while jogging with his dog; the guy loves to crack wise about the fact that his wrinkled shirt is not the result of his wife’s failure to iron said wrinkled shirt; and the guy has no qualms whatsoever at pushing lethal levels of barbiturates into wrongfully convicted criminals. He’s a bodega of right-wing Victory vodka. Fuck with the liberals, drawl until women are back sewing parachutes, and pretend as if the “Texas miracle” is not, in fact, mostly the result of $6 billion in Federal funds, a huge influx of immigrants, and budget gimmickry that would make Paul Ryan blush. Oh, and the guy thinks Social Security (and about 95 percent of the past 100 years of sovereign law and judicial precedent) is unconstitutional.

He just might be the right kind of wingnut viability that could challenge the sitting president to the point of No Return. Could Mitt Romney—a guy who has been running for president for over half a decade and has yet to define himself other than as a Mormon (unfairly) and as a panderer (fairly)—beat out the faux grassroots populism of Bachmann and Perry? No. If Romney miraculously grabs the party's standard, a third-party candidate from the State of Creationism will see to it that a. Obama locks up reelection with more electoral votes than the first time around, b. Republicans will have found another couple cords of woods to stoke their righteous fire, and c. the Onion is in fact prophetic.