Stark and Dreadful and Inescapable

We live in a more backwards society than the dystopia depicted in Idiocracy. 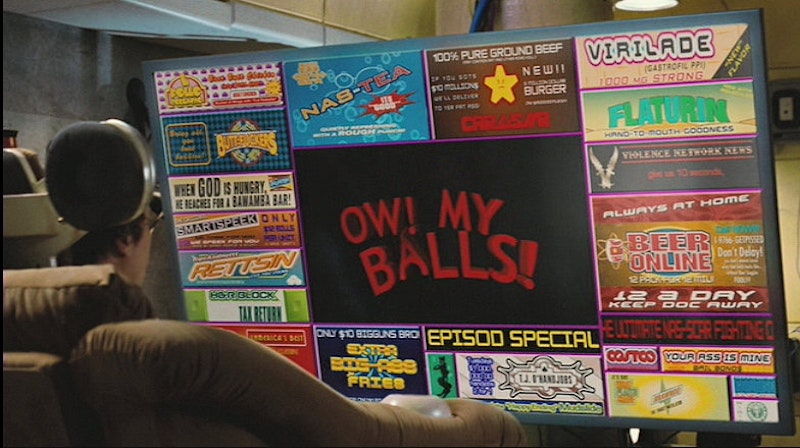 Mike Judge’s 2006 film Idiocracy portrays a society that very closely resembles the world we live in today. The film is a satire in which the protagonist, Joe Bauers, participates in a military experiment gone awry that leaves him in a futuristic dystopia where everyone is unbelievably stupid. Natural selection has gone horribly wrong, and only the dumb and ignorant reproduce, while the smart people die out. But what’s perhaps most ominous about the film is that the people of Idiocracy are more sensible than we are because they at least rely on Joe, whom they realize is the smartest among them, to save them from themselves and shape their policies. We, on the other hand, ignore our greatest thinkers—to pick two salient examples, Einstein warned that if we fail to rid ourselves of nuclear weapons humanity will experience a nuclear holocaust that will wipe out the species, and the entire climate science community has formed a consensus that climate change will obliterate mankind unless we act quickly.

Joe, who was selected by the military for the experiment because he is the most average guy they could find, wakes up in a world where he is ridiculed for “fag talk” because he speaks in comparatively sophisticated language, and the only remnants of civilization are movies and shows of people getting kicked in the balls, things blowing up, massive vehicles, corporate control of government, and, of course, FOX News (although Rupert Murdoch’s News Corp. produced the movie, many suspect that it tried to stop Idiocracy from getting any serious screen time, as it barely made it to theaters. Nevertheless, it has become a cult classic, much like Mike Judge’s other scathing critique of America and the corporate world, Office Space).

Idiocracy features a society dominated by spectacle, machines, and ignorance. Everyone must have a tattoo featuring their identification information inscribed on their forearms by computers. Cameras pervade the streets in search of escaped convicts and other miscreants. Indeed, machinery is the only vestige of intelligent life. The average IQ of humans is borderline retarded. The streets are filled with garbage because nobody has the foresight or willingness to figure out how to clean all the waste. And mankind suffers from a horrible food shortage because they’ve been brainwashed by the all-powerful Brawndo Corporation into believing that Gatorade—which has replaced water as the primary liquid because it contains “electrolytes,” as everyone drone-like repeats, can nourish crops better than water, which is contemptibly referred to as “the stuff in toilets.”

Upon discovering that Joe is the smartest person on the planet, the president of Idiocracy appoints him Secretary of Interior to solve the economic and food shortage crises. When Joe decides to nourish the soil with water rather than Gatorade, at first the people revolt because Brawndo Corporation, now practically obsolete, had employed half the population. They also refuse to believe that water will solve the crop crisis because it does not yield instant results. Consequently, they sentence Joe to “Rehabilitation,” which is a televised demolition derby featuring flamethrowers and massive vehicles running over minuscule cars driven by the guilty. But before they kill Joe one of his friends saves him by showing footage on the massive TVs displayed in the center of the Rehabilitation arena proving that the crops were growing, the plan to use water worked. Accordingly, Joe is pardoned and eventually becomes president.

Our society on the other hand, may be filled with more intelligent people, but we do not listen to them. Einstein made it very clear that the species faces a “stark and dreadful and inescapable” dilemma—we can either rid the world of nuclear weapons and stop making war against each other, or we will all eventually be wiped out. Einstein was a pacifist for much of his life, but when Hitler came to power he changed his stance and wrote his infamous letter to FDR about the bomb. When the Manhattan Project was completed he understood that humanity had placed itself in great peril.

Today the threat of nuclear disaster is as great as ever, if not more so. Aside from the much publicized possibility of terrorists detonating a dirty bomb in an American city, “the chances of an accidental, mistaken or unauthorized nuclear attack might be increasing,” warned former Sen. Sam Nunn, who has led efforts to reduce the threat, adding that “We are running an unnecessary risk of an Armageddon of our own making” because American policy makers have long operated with a nuclear first-strike option—senior officials in the Reagan administration believed we could win a nuclear war according to national security expert William Hartung, and Bush considered using nuclear weapons in the invasion of Iraq; let’s also not forget that America is the only country ever to use an atomic bomb.

This aggressive posture makes “Russia more likely to launch upon warning of an attack, without waiting to see if the warning is accurate” according to Nunn, and “the Russian early warning system is in serious disrepair and more likely to give a false warning of incoming missiles.” Furthermore, American war planners rely on “the high-alert, hair-trigger nuclear posture,” which forces our leaders “to decide almost instantly whether to launch nuclear weapons once they have warning of an attack, robbing them of the time they may need to gather data, exchange information, gain perspective, discover an error and avoid catastrophic mistake.” According to strategic analyst Bruce Blair, “the early warning and control problems plaguing Pakistan, India and other nuclear proliferators are even more acute.”

We have similarly refused to heed climate experts such as James Hanson who have warned that civilization will be obliterated by global warming unless we stop emitting fossil fuels into the atmosphere immediately. The scenario mirrors that of the food crisis in Idiocracy. The science is clear and incontrovertible—just as the scientific evidence is beyond dispute that we must use water, not Gatorade, to grow crops, the experts are unequivocal that greenhouse gases trap more heat in the atmosphere and warm the planet, causing glaciers to melt, sea levels to rise, drought, flooding and a whole host of extreme weather, including snow fall in places that have never seen snow-flakes before. It’s simple physics. In order to avoid the worst effects of global warming we must reduce CO2 parts per million to 350, according to the consensus. We are already at 390 and counting. We are experiencing food shortages, from the dust bowls plaguing Middle America throughout the summer to the horrific famine in Somalia, which has decimated tens of thousands and left countless children without food. Moreover, food prices have increased in large part because of the terrible heat wave that struck Russia last summer and wiped out wheat harvests, killing tens of thousands.

And yet we refuse to act. Half the population believes global warming is not real, and half of the House of Representatives consider climate change a liberal hoax. And many of those who do recognize that global warming is occurring have become convinced that we can live with it, that technology will save us.

Indeed, we live in a society that is worse than the one depicted in Idiocracy. The fossil fuel industry parallels the Brawndo Corporation in that it controls the government, forcibly condemning us to food shortages and the eventual annihilation of the species. The level of pollution, while largely hidden, rivals that seen in the garbage pile-ups that litter the streets of Idiocracy. And most Americans repeat the mantra that we need less regulation in the energy industry because a “government takeover” would be the “end of freedom.” Some, like Michele Bachmann, believe government has already gone too far in this realm, promulgating the lie that President Obama has mandated which light bulbs we can and cannot use. So long as we continue to allow ourselves to be ruled by corporate oligarchs and Dr. Strangelove-like planners in the Pentagon, we will certainly see a fate far worse than that depicted in Mike Judge’s film.