Justice is a Joke 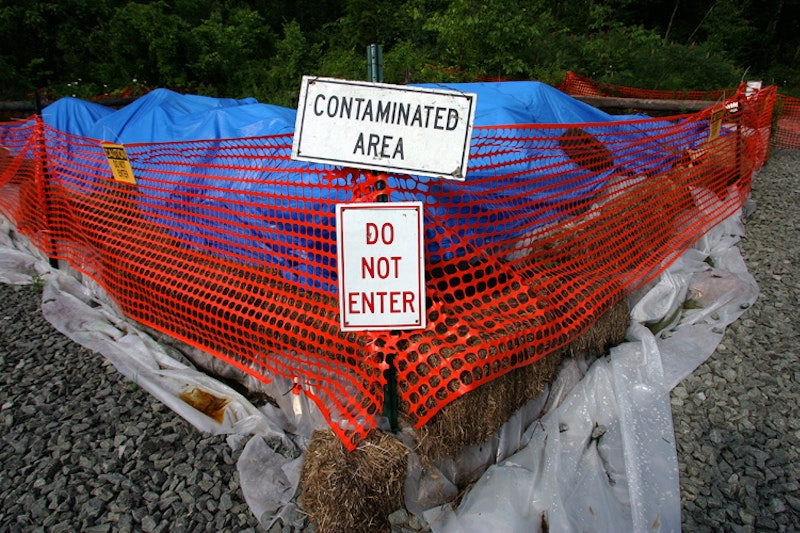 A new shocking HBO documentary, Mann v. Ford, offers a gut-wrenching account of the horrible consequences of corporate greed and government corruption. It is the story of the Ramapough Mountain Indians’ struggle to attain justice and secure safety for their community, which has been ravaged by Ford.

The Ramapough live just 40 miles out of Manhattan, in the hills and forests of northern New Jersey. They have lived there for hundreds of years and maintain a close-knit community from which few willingly leave. During the 1960s and 70s, Ford opened plants nearby and began dumping waste on the Ramapough’s land, which was technically owned by Ford. They polluted the area with a whole host of ultra-toxic chemicals, such as arsenic and lead. One of the prime sources of pollution was paint. When Ford workers showered their vehicles with paint the chemicals filtered into containers that were carted off and dumped in the Ramapough forest.

The Ramapough’s land has thus been transformed into a virtual wasteland. The hills and streams have been utterly contaminated, and toxic chemicals have infiltrated countless homes. But during the 60s and 70s, when the plaintiffs of Mann v. Ford were growing up, the Ramapough didn’t understand what was happening to them. They heard the chemical-filled trucks rumble into their neighborhood at night, but the concerned elders instructed everyone to try not to pay attention. The children, as they had done for hundreds of years, continued to play in the forest and exposed themselves to the most dangerous materials. They went mud sliding in the toxic sludge, and some even ate some of the paint-dirt mixture because it tasted good (cherry red paint). They had no clue what was happening to them at the time.

Now, over 30 years later, the community has been decimated. Almost everyone dies young from a horrible disease, typically cancer. In one harrowing scene of Ford v. Mann the plaintiffs’ lawyer walks down a block with one of the Ramapough and learns that in just about every house someone has died of cancer. And when one person suffers, the whole community suffers. Everyone must watch with horror as another member of their tribe experiences unimaginable pain and death.

One kid, a teenager, shows the camera the size of his latest abnormally large kidney stone. Another man in his 40s has had over 20 surgeries for his terrible skin disease, which forces him to shower five times a day and urinate through a special tube. “My life has been ruined,” he laments. And there are only a handful of people over 60. Many women cannot give birth or they and their fetus will die. Most of the Ramapough have to worry every night if the latest lump or cramp they feel in their bodies means they’ve contracted cancer.

Five years ago they decided to take action and hire lawyers to sue Ford. But they’ve learned the hard lesson that in America corporations are almost never held accountable. The executives of Ford knew full well what they were doing. Internal documents reveal that they considered the Ramapough expendable, less than human. As one of the Ramapough explains, if he had poisoned someone he’d be sitting on death row. But when a massive corporation like Ford does this a hundred times over they face no repercussions.

Decades ago the EPA came to inspect the site and force Ford to clean up the mess. Ford did a half-assed job, and the EPA looked the other way, asserting the area had been restored. This was a vicious lie, and the Ramapough quickly discovered that they faced not just one giant foe, but two—Ford and the EPA. The EPA, like virtually every regulatory agency in America today, has been transformed into a puppet for corporations. The Ramapough and independent inspectors understand that there had to be a conspiracy because a 30-second walk through the forest shows that the area remains grossly contaminated.

According to one of the experts interviewed, particularly since the Reagan Revolution the EPA has been instructed to not get in the way of profits. The less they help average Americans and serve big business the more they are rewarded, whereas those who actually do their job are punished. This occurs in virtually every industry, from railroads —where private corporations are encouraged to cut spending on safety—to Wall Street, where the credit ratings agencies, such as Moody’s and S&P, stamped AAA ratings on sub-prime mortgage deals they knew were toxic (which makes S&P’s self-righteous downgrading of America’s credit utterly hypocritical).

The Ramapough learned about this harsh reality when some of the community leaders came to Washington to watch Lisa Jackson accept her nomination as head of the EPA for the Obama administration. At the ceremony Jackson discussed how the plight of the Ramapough is one of the problems she seeks to fix. It seemed a momentous occasion. But nothing has changed. The Ramapough were merely used as props. Tragically, this symbolizes the Obama era as a whole—one filled with great promise and ultimate betrayal.

When the Ramapough finally brought their case to court, they found out that justice in America today is a joke. The judge worked to make it as difficult as possible for the plaintiffs to make their case, and their suit was further hampered by the fact that, although any sane person would conclude that Ford is guilty because there is no other way to explain why so many members of their community die young from cancer, it is nevertheless extremely difficult to prove causation with unanswerable scientific evidence in a court of law. And because the plaintiffs’ case was such a massive undertaking, involving so many victims and extensive evidence gathering, it became very hard to continue to pay the lawyers’ fees.

Even worse, when the economy nearly collapsed in 2008 the Ramapough and their lawyers, fearing Ford would go bankrupt and be unable to compensate anyone even if found guilty, decided to reach a settlement. They accepted $12 million, a pittance, of which each person received roughly $4000 to $8000. Imagine receiving such paltry compensation from someone who murdered your mother, causing her to die of cancer in her 40s. Meanwhile Ford got bailed out and in 2010 earned billions in profits.