The internet has changed communications techniques in politics, but the content of campaigns remains the same. 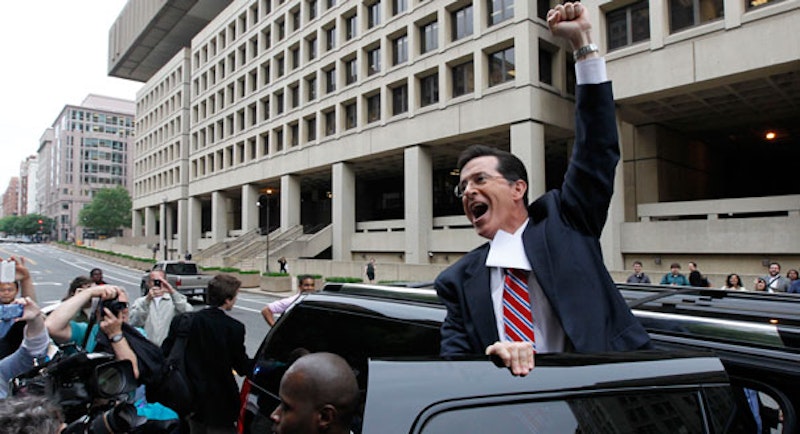 Stephen Colbert has mocked them. Dylan Ratigan wants to abolish them. And americanselect.org wants to bypass them and go directly to the voters. And oh, don’t forget the wave of revolutions they’ve stoked across the Arab world. In one way or another, they all have one or more things in common. They all involve politics, money and the Internet and its offspring social media. Add to the mix the wide screen bullhorn of cable TV and right here in America we have the perfect union of Professor Harold Hill and Huxley’s Brave New World. Soon the Internet and TV will be interactive, in a seamless roundelay, in the same box and, for good or ill, the ultimate participatory democracy, or the alternative, mob mayhem, will be just a click away.

Maryland has already witnessed the terrible swift speed of massing voters electronically when Del. Neil C. Parrott, Republican of Frederick, programmed his computer and collected 108,000 signatures—more than double the number needed—to petition the state’s Dream Act to referendum. It was precise, bloodless and it caught those who support in-state college tuition breaks for children of illegal immigrants completely flat-footed and by surprise. A court challenge is pending based on the pout-y notion that employing a computer program to gather signatures was unfair.

Now think national. Talking head shows are where the Internet and TV intersect in the nation’s politics. Colbert has achieved great fame and fortune for his mimicry of the nation’s election laws. He formed his own wack-a-do PAC (political action committee) with no discernable purpose but to mock campaign finance laws. And he did it by harnessing his perch of cable TV’s Comedy Channel with the Internet to raise funds from the thousands who responded and contributed. And he returned the gesture by running a daily crawl across the bottom of the screen of the donors’ names. And this begat even more donations, enough to sponsor his PAC’s own hilarious television commercials during the Iowa straw poll. And this drew even more contributions as well as a protest from an Iowa TV station that refused to run the spoof ads because they mocked the Iowa straw poll which, in reality, is a mockery of a real election. And on and on.

Comes now Ratigan, whose Dylan Ratigan Show on MSNBC is kind of a hell-raising populist-pitchfork mixture of economics, libertarian politics, and social protest, but most of all a dyspeptic outrage, and rightly so, over the obscene influence of money on politics and government. He wants the craven abuse to end. So saying, Ratigan is fusing TV and the Internet to marshal 100 million Americans to support a constitutional amendment “to get money out of politics”—that’s about as precise as he’s gotten so far. Ratigan’s co-conspirator in the effort is the show’s regular panelist, Washington lobbyist Jimmy Williams, who supposedly is drafting the amendment with the guidance of Rep. John Yarmuth (D-KY), chairman of the House Government Reform Committee and a supporter of Ratigan’s anti-money crusade. Ratigan even embarrassed former Pennsylvania Gov. Ed Rendell (D), who should know better, into endorsing the amendment idea on the air. There are already four amendments languishing in the House to limit money in politics, but Ratigan wants to gather the 100 million names to illustrate not only the power of an idea whose time he believes has arrived but also the ease and wizardry with which it can be accomplished in the age of the Internet.

There are several pitfalls to Ratigan’s idea, though. First, it’ll never happen. Even he knows that. He may get the names, all right, but Constitutional amendments require a two-thirds vote in the Congress and ratification by the legislatures of three-quarters of the states, which can take years. Over the past 235 years, there have been 10,000 amendments proposed but only 27 adopted. Second, an amendment banning money from politics would have the effect of subverting the intent of the first amendment which guarantees free speech. The 1976 Buckley vs.Valeo decision validated money, or campaign contributions, as an expression of speech. And the Supreme Court recently ruled, ludicrously, that a corporation is a person with the same rights of expression as individuals. Simply put, as brazen as it is, it is reckless to mess with the Constitution on an issue as mundane as money. And if the amendment ever were adopted, it would be equally difficult to undo.

Americanselect.org is attempting to conduct the nation’s first Internet election as it did and failed under another name, Unity 2008, four years ago. It would bypass political parties and conventions and hand off the election of a president directly to the voters via the screen on your desk or the computer on your lap. Already it has collected 1748 names of the 1.9 million it claims it needs to get on the ballots of every state in the country, a dubious claim as well as an almost impossible task, since every state’s laws differ. How this would be accomplished isn’t exactly clear according to the organization’s web site. Elliot Ackerman, the organization’s policy director, also employs TV and the Internet, one reinforcing the other, to make his pitch and encourage voters to submit their names. Ackerman has pitched his idea on both Colbert’s and Ratigan’s TV shows. Are you beginning to grasp the symmetry here?

“The first ever open presidential nominating process. No special interests. No agendas. No partisanship,” americaelect.org proclaims. It promises that during its online convention next June, “The people will make history by putting their choice on the ballot in every state.” If that’s the goal, what’s the point? The point appears to be, as is much of the play-toy gimmickry with the Internet and other electronic gadgetry these days, only that it can be done in the age when an idea, good or bad, travels at the speed of light and anger is the driving force of the electorate.

The skilled used of the Internet in politics is relatively new but much improved in the half dozen or so years since it came to prominence as a way to harness a campaign workforce. It was pioneered by Howard Dean in 2004, when the Democratic candidate for president introduced the medium as a mechanism for raising millions of dollars in campaign funds. Dean also used the Internet effectively as chairman of the Democratic National Committee to raise funds and rally voters to the Democratic side of the ballot.

Its use was heightened by the 2008 campaign of President Obama who not only raised millions of campaign dollars but also amplified the Internet’s use as a means of communication with his supporters. Obama’s campaign claimed at the time to have a data base of 12 million names which they integrated with the DNC’s data base when Obama became president. During the 2008 campaign, Obama’s fundraisers created the framework of a legal Ponzi scheme as a way of sucking up campaign dollars. Even Colbert acknowledged on the air that electronic contributing is addictive as is evidenced by the repetition of names on his list of donors.

Every campaign cycle brings with it innovations in technology and communications. It’s amusing to look back and consider how far electronic campaigning has developed in the nearly 20 years since Bill Clinton ran for president and introduced the “fax attack” as a rapid-fire communications technique. Then, the fax machine was the shortest distance between a campaign headquarters and a newsroom. Then again, though communications techniques are now lightening fast, the content of campaigns hasn’t changed very much from the penny-dreadful newspapers and cheap sloganeering of two centuries ago.