The Mullet Will Be Televised

Can we talk about how awesome Jeffrey Kofman’s microphone toupee is? 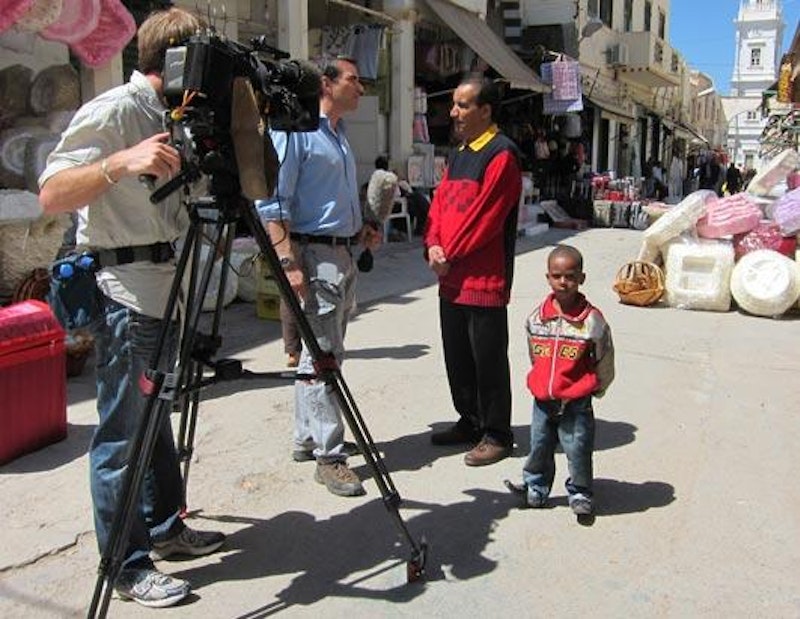 As I type, deposed Libyan leader Moammar Gadhafi is in hiding—holed up in an undisclosed location or maybe in the process of being smuggled out of the country he used to rule with a bloody iron fist. His sons may or may not be under arrest. His compound lies in ruins—looted, defaced, torn to pieces, smoke billowing up beyond—as millions of jubilant Libyans celebrate the end of his decades-long dictatorship in the streets.

I know this because earlier this evening, I was watching helmeted ABC News correspondent Jeffrey Kofman interview liberated Libyans, dodge mounted Jeep gunfire, and just generally wear the glazed “Can you believe this shit” expression Americans don in semi-lawless warzone situations where anything can go down at any time. To be honest, though, I couldn’t get into the story, the geopolitical or human-interest aspects, because Kofman’s microphone was sporting a ridiculous fuzzy gray cover of some kind for no reason I could see. I mean, don’t get me wrong, the cover was kind of awesome in a “what’s wrong with this picture” sort of way, or an “aging avuncular rocker who refuses to trim or dye his thick, permed ‘do” way, or a “Did Jeffrey Kofman recruit a muppet muskrat or wharf rat as an interview assistant?” way.

Indeed, the microphone, sheathed in its furry, pelt-like cover, bobbed, weaved, and nodded along with Kofman as he narrated, as if in open, derisive mockery of the whole farcical, first-world—or is it second-world, now that our credit’s in the tank?—notion of transplanting telegenic talking heads to dangerous third-world regions and expecting them to maintain any semblance of a New York-television-studio degree of composure. Seriously, what does a cover like that achieve, other than subconsciously driving the audience to break out the Rod Stewart LPs? The prescribed function is probably to keep the equipment dust-free, but it’s laughable that this is a concern in a situation where reporter, cameraman, and extended crew could all be killed en masse by a solid-gold Moammar Gadhafi statue toppled by rebels. Anyway, for real, I want me one of those microphone toupees for Christmas this year— hold the actual microphone. I wonder: do they come in electric blue?