Reince Priebus Decided Not to Be There

The Trump pledge and a sudden change of plans. 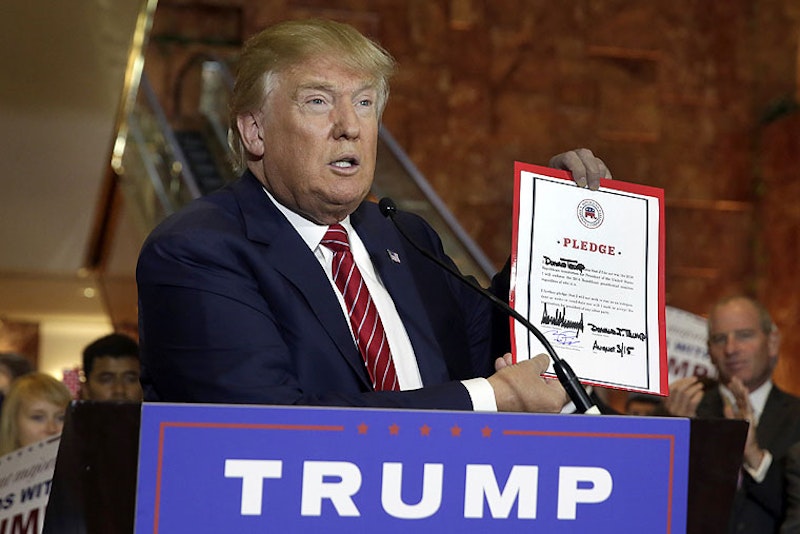 Originally the RNC chairman was supposed to be up there. The Party's official leader would be standing on the platform while the Party's royal pain in the ass publicly signed a piece of paper. The Party leader would then depart, brandishing the paper as a sign of order established. But the leader decided to do his departing early. Reince Priebus, chairman of the Republican National Committee, never got down to the lobby of Trump Tower. He met with the big man somewhere in the tower's upper reaches, and then left carrying his host's signed pledge not to run as a third-party candidate. By the time Donald Trump stepped in front of the crowd, Priebus had fled to the outside world.

His exit was a last-minute change. The day of the signing, at 10:55 a.m., The Washington Post said, “Trump will make the announcement at an afternoon news conference at Trump Tower, his campaign headquarters in New York, where he will sign the loyalty statement alongside its author, Republican National Committee chairman Reince Priebus. That appearance will follow a meeting with Priebus.” At 2:57 p.m., the Post said this: “Trump made his announcement at an afternoon news conference after meeting with the loyalty statement’s author, Republican National Committee chairman Reince Priebus, whose relationship with the mogul has been cordial but delicate since Trump entered the 2016 race.” Note: after meeting with Priebus. (The story's original version is gone from the Post's site, but another paper ran it here.)

Apparently something happened between 10:55 and Trump's announcement. The Post won't tell us what, or even let on that there's something to notice. But the change wasn't casual. From Politico: “The meeting was delicately choreographed. The RNC waited to circulate the pledge until it looked like Trump was on board, and Priebus would not go to Trump’s turf if he thought there was a chance he could be embarrassed.” Possibly Trump got greedy and wanted the platform to himself. But a big man likes a little man to set him off, and Priebus is little. Why get rid of him? And signing the paper in front of the crowd would have been neat, a good gimmick. Trump lost that opportunity.

My guess is that important Republicans had been letting Priebus know that, delicate choreography aside, just making the trip knocked him down a few too many pegs. Certainly, some expressed that idea to the Post afterwards: “Veteran GOP voices expressed discomfort about the way the Republican Party is trying to manage Trump, and with the power Trump is accumulating within the party. Priebus’s travel to Trump Tower spoke volumes, several said.” Michael Steele, the man before Priebus at the RNC, figuratively looked down and away as he said, “I would have preferred that Trump met [Priebus] at the RNC, but I don’t know the circumstances that required him to do what he did.” An old hand from the second Bush White House was blunt: “They’re bowing at the altar of Trump Tower.”

A party chairman might possibly go to meet a candidate, I suppose. But if the candidate is Trump, the chairman has to do so. That requirement makes the chairman look not so good. It's Trump's way or no, and he's doing it Trump's way. As Wehner puts it: “Trump is in control... It looks like the RNC is going hat in hand to Trump. It doesn’t help the RNC. It simply helps Trump.”

The Post: “The RNC and Trump’s advisers had been in contact for at least a week about the pledge, working together on the timing of the roll-out, as well as reassuring Trump that the party wants to engage with him and treat him as they would any other candidate, according to Republicans familiar with the talks.” Those Republicans would most likely be the chairman and his chief strategist, Sean Spicer. At any rate, Priebus spent a week setting up the event and never figured out that, no matter how the thing was staged, it would make him look bad. Instead he was worried about Trump's frame of mind and how to soothe it.

I do give him credit for this: he got out of that place whether Trump liked it or not.  I don't know how, but Reince Priebus made it back to the sidewalk and freedom. That may not sound like much, but a declining regime has to take its victories where it can.