GOP With a Democrat on Top

Patterns hold until they don’t. 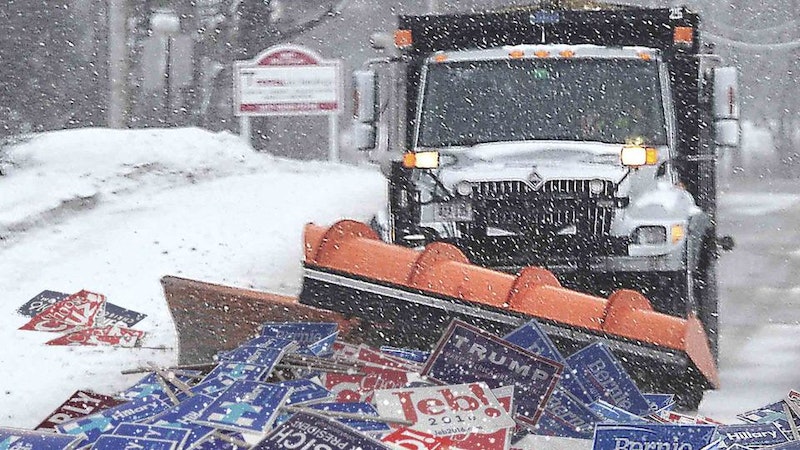 One of my favorite insights about the culture is the observation that far too much wisdom is considered timeless and certain—right up until it gets contradicted (years ago, I should’ve come up with a catchy term like “black swan” for those unexpected things that change prevailing patterns and thus conventional wisdom).

For example, most probably think, reasonably enough, that the odds of the president being Republican vs. Democrat tend to be about 50/50 and that the same goes for the control of legislatures (national or state-level). Yet it was rapidly becoming accepted wisdom in the Reagan era, when it appeared Americans liked Republican presidents and decades of Democratic control of Congress, that there must be some nigh-perpetual pattern at work producing that seemingly contradictory split.

The “experts” concluded that Americans must (rather rationally, albeit subconsciously) tend toward wanting government to dole out goodies for their individual favorite government program or state (thus state-level Democrats and Democratic members of Congress, rightly or not) while also wanting a stern, fiscally-conservative daddy figure atop the whole system doing what he can to keep the total amount of spending from getting out of control. That’s not so crazy, either as practice or (unconscious) theory.

But, unless the laws of economics have changed or Americans have been replaced by a different species, that pattern should basically hold forever, shouldn’t it? Yet now we face the very high likelihood of a Democratic president being succeeded by another Democratic president (both Sanders and Clinton beat Trump, for example, in surveys about people’s general-election preferences) while the Republicans have quietly taken over most state-level governments.

I’m not claiming these party labels really reflect huge policy differences, by the way, but to the extent they at least represent attempted branding differences to which voters are responding, it would appear something has changed. I may not know what, but I can safely say the old purported pattern must not have been inevitable or permanent (little is, is my larger message).

Agnosticism is usually the smartest position, but if I had to posit a new theory to replace the old one, I’d suggest that perhaps Americans are more philosophical/ideological when they elect a president than when they elect officials to other positions. That may be foolhardy of voters, since it’s actually far easier to hold individual legislators to the standards of a given region or niche constituency than to hold any president to such standards, since the president (of either party) seeks majority approval from the whole nation. But voters may nonetheless tend toward “pragmatic” thinking about legislators (isn’t Congressman Bob the guy who got the feds to help suppress the rabid weasel population in the local park?) and philosophical/aspirational thinking about presidents (he seems as if he embodies who we are as a nation!).

Self-reliance and carefully watching the budget sounded like good philosophy in the 80s (and still sounds good to some of us), while “pragmatic” people still wanted lots of pork brought home to their districts. Now, most Americans seem to think like socialists of one stripe or another when asked about the fate/meaning of the nation (thus Sanders), but they also increasingly sense that as a practical matter the less they have to deal with government ineptitude in their immediate environs, the better.

So maybe we now live in a more economically-uncertain world that produces (crudely speaking) local skinflints but a hazy, nationally-shared dream of some unifying heroic figure at the center rescuing us all from global trade and rigged stock markets. Whether electing rightists or leftists, though, perhaps we are at our least practical as voters when electing presidents.