He can’t be as naïve as he lets on. 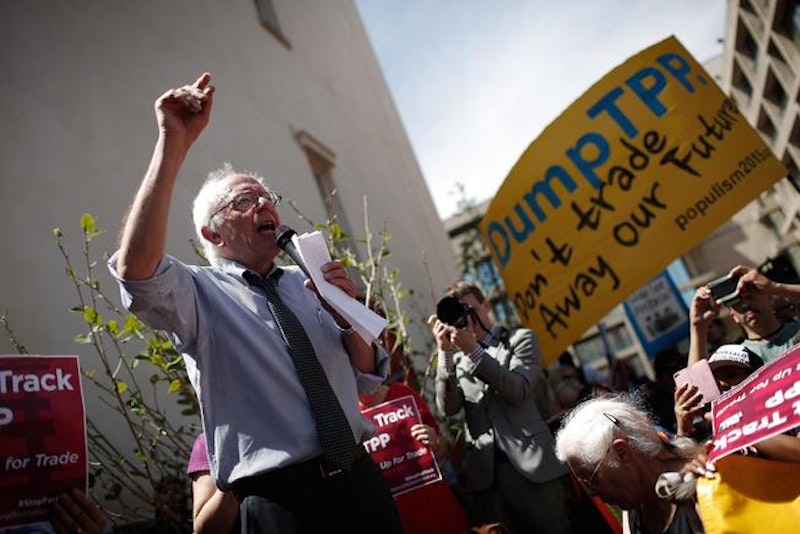 There are two ways to criticize Bernie Sanders. The first is to say that he's a liar. The second is that he's a fool. Norm Ornstein at The Atlantic embraces the second interpretation. According to Ornstein, Sanders believes his own rhetoric of transformational populism, purity, and political revolution. In Ornstein's view, Sanders really thinks that a coalition of new, young voters sick of politics as usual will sweep him into office and (this is the tricky bit) force Congress to pass sweeping health care reform, free college tuition, and big tax increases.

And Ornstein is correct. If Sanders believed that all of that was going to happen, he'd be a fool. He'd also be a horrible president, who’d be paralyzed once his entire slate of programs foundered in an obstructionist Congress. But is Sanders really that naïve?

Sanders—despite Ornstein's comparison of the two—is not Ted Cruz, who tried to get the government to default on the debt just to gain notoriety. Sanders has been in Congress forever—as a Representative for 16 years, and a Senator since 2007. And while he's ideologically to the left of most of his colleagues, he doesn't have a record of crazed obstructionism. Instead, he's mostly used the legislative process responsibly and cannily to push for his priorities, often with bipartisan support—as with a 2013 amendment which passed 66-29 to advance autism care in the military.

Maybe the best evidence that Sanders isn't a crazed, unrealistic idealist, though, is in his non-progressive stances. As Hillary Clinton has pointed out repeatedly, Sanders' record on gun control is crap—because he's a politician from Vermont, and politicians from Vermont vote against gun control to stay in office. Similarly, Sanders rejected reparations because, as he put it succinctly, "First of all, its likelihood of getting through Congress is nil. Second of all, I think it would be very divisive." Does that sound like a man who is somehow off on a cloud, unaware of Congressional calculations? Or does it sound like a politician who’s willing to set aside moral priorities based on pragmatic considerations of government?

Of course, Sanders doesn't sell himself as a normal politician—which is where he's a bit of a liar. Granted, he may be lying to himself to some degree; perhaps he really does think he'll be elected on an incredible wave of new voter turnout which will change everything, just like maybe Obama believed, at least a little, in hope and change. But if Sanders got into office and the political revolution failed to appear… he'd have to fall back on the political skills and ability to compromise that led him to pass relatively un-partisan (though worthwhile) efforts like autism care, and pushed him to be pro-gun.

Both the promise and the threat of Sanders are probably exaggerated. Like Clinton, he’s a longtime Washington politician; like Clinton, he’d face severe restrictions on what they could achieve despite Congressional opposition. Their priorities would probably be somewhat different—and I think Sanders' passion for poverty issues is essential and long too marginalized in the Democratic Party, which is why I'll probably vote for him. Also, he's less likely to want to drop bombs on people in the Middle East than Clinton. But, contra both fans and detractors, his record is not that of an uncompromising would-be miracle-worker, and his (very unlikely) election would signal neither the millennium nor the end times.

The presidency is a singular job, and it's difficult to know what strengths and weaknesses each office-holder would demonstrate. But Sanders' long record of productive, often noble, sometimes wishy-washy service in the halls of power seems like it’d serve him in good stead, for better and for worse. In office, President Sanders would surely disappoint both boosters and enemies. And presidents are usually disappointing.