How Does New Hampshire Feel About Androids?

Marco Rubio is going to find out. 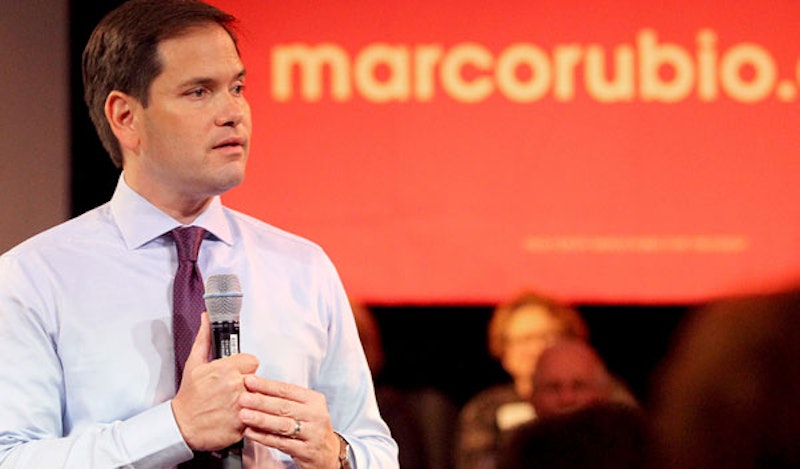 Not long ago Ted Cruz was supposed to be in trouble because of the last debate held before Iowa. Yet he won Iowa. Now Marco Rubio is the wounded creature. Rubio had a nice roll going as New Hampshire came up. Then he managed to look terrible in the last debate before the vote. Getting pummeled in the Iowa debate left Ted Cruz unharmed, but Cruz had spent two and a half years wiring the Iowa born-agains; last-minute atmospherics wouldn’t queer his game. Whereas the Rubio campaign is atmospherics and nothing but.

Rubio’s announced aim is to place second in New Hampshire. Maybe he’ll do it, and his team will be able to say everything is on track. But it won’t be a good second. His third-place finish in Iowa was a good third place: he was right behind supposed Mr. Frontrunner, Donald Trump, and he had squirted up in the polls just days before the vote. Things were moving. This time he’ll be down several extra points, and reporters will write about his skid, not his surge.

Just when the big boys were forming up behind him. The endorsements were coming in, not least that of the newspaper Sheldon Adelson had just bought (the Las Vegas Review-Journal: “Sen. Rubio has the ideas and the charisma to bring independents and moderates under the GOP tent”). The paper says Adelson had nothing to do with its choice, but Rubio had been calling the billionaire twice a month with campaign progress reports; maybe now Adelson liked what he heard. Seven months into the Trump emergency, and the Republicans’ embattled top ranks were settling on a champion. Then the young contender fritzed out onstage in Manchester.

Rubio didn’t say anything embarrassing. There were no statements to be walked back or clarified. He just malfunctioned. He behaved in a way that made people ask what was wrong with him. When New Hampshire votes on Tuesday, Marco Rubio will have been starring for three days in a viral oddity entitled “Barack Obama knows exactly what he’s doing.” Those are the kickoff words to a bit of business Rubio likes to sell, a riff that sets his contralto voice thrilling with indignation. The little man sounds well doing it (“dispel with this notion,” “undertaking a systematic effort”). But in the Manchester debate he pulled it out three times in four minutes, like he couldn’t help himself, and Chris Christie made fun of him for doing it. When Rubio tried to fire back, his voice went wobbly and thin. He had the correct material for a hit on Christie (“criticized the young lady, saying, What am I supposed to do, go back with a mop and clean up the flooding?”). But he sounded lost. Christie, who has a gift for simultaneously being furious and at ease, swatted him down. “It gets very unruly when he gets off his talking points,” Christie said.

Rubio’s job as candidate is to step forth, sound good, and then step back again. As opposed to the more common method, which is to step forward and keep talking until everybody agrees with you. Rubio’s method worked fine until now. Republicans fed up with this year’s hair-pulling and general upheaval could look at him and say, Hey, maybe that one. But now he’s the candidate who gets rattled, the precious boy who needs an egg around him.

People will think of the water bottle. On national TV, responding to the State of the Union, Rubio had to reach over for a water bottle and suck on it! Not only that, but his eyes stayed cut to the camera: he couldn’t decide just to drink the water, he had to stay in the viewer’s good graces. He was a man whose personality was showing its gaps, the places where the pieces don’t fit. No wonder the big wigs held off from him until Iowa. Now this, just when they were ready to get things rolling.