Maybe if you're a white guy. 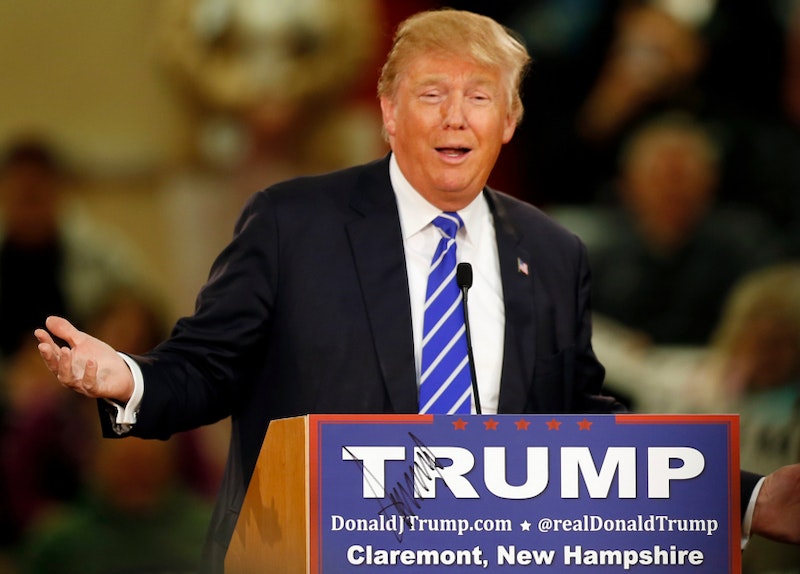 There is one answer to every political question: Trump! No matter what your ideology, somehow Trump validates you. If you're a Sanders supporter, Trump's rise shows that we need to pay more attention to the white working class and scuttle trade deals. If you're a Republican, you can argue that Obama's failed policies have sparked volatile discontent.

And if you're a libertarian, you can blame Trump on the rise of political correctness. That's what Robbie Soave does this week from the pages of Reason. Soave's beat is reporting on (what he characterizes as) campus free speech excesses, and so he conveniently concludes that Trumpism is fueled by (you guessed it) campus free speech excesses. When college campuses repress speech, the desire to root for offensive expression become overwhelming, Soave argues. He points to outrage over "Trump 2016" messages chalked on school grounds as an example of how support for Trump becomes a stance against censorious scolds. And he concludes, "Given that 'he isn't afraid to be offensive' is driving so many people to Trump in the first place, perhaps it's worth exploring whether ratcheting down the PC-based censorship crusade currently underway in American higher education might forestall the appearance of future Trumps."

It's true that Trump, and Trump's supporters, celebrate his willingness to be offensive. Trump says racist, sexist, Islamophobic, virulently awful things. He does so, supposedly, because the PC left have clamped down on free expression. Trump's popularity, and performance, is a reaction against injustice and totalitarianism, in the view of himself and his fans.

How seriously should one take fascists’ explanations of their own behavior, though? Hitler argued that his anti-Semitism was justified because Jews had stabbed Germany in the back in World War I, and were organizing an international plot to destroy the German people. Some pox-on-both-their-houses commenter at the time might’ve said, "Well, Hitler's policies are awful, but the Jews should be more transparent and less conspiratorial in order to forestall the appearance of future Hitlers."

But Hitler wasn't actually angry at anything Jews did or didn't do. He was angry that Jews existed. Hitler was determined to find a reason to murder Jews. Similarly, Trump spat misogynist slurs at Fox News host Megyn Kelly not because Kelly was a totalitarian oppressing him via censorship, but because she was doing her job, and is a woman, and Trump likes to spout misogynist slurs. Trump doesn't say that Mexicans are rapists because he's striking a blow for free speech. He says it because he's racist. And to the extent people cheer him for saying that Mexicans are rapists, those people are racists too.

It's worth pointing out that Trump is, in fact, massively unpopular. He’s unpopular with everyone, but particularly disliked by Hispanics (77 percent unfavorable) by women (67 percent unfavorable) and blacks (less than 10 percent support). The only people Trump appeals to in any numbers are white men. If PC is alienating people and driving them to Trump, then the only people it seems to be alienating are white guys. In which case, maybe the issue isn't some sort of blanket need to fight against censorship, but rather a discomfort with a culture in which blacks and women are able to get people to listen to them when they say, "dehumanizing me is offensive." Is it censorship that powers Trump? Or is it anger at having to deal with certain groups as equals?

People on the left can be intolerant, just like people of any political persuasion. But it's not Bernie Sanders encouraging people at his rallies to beat protestors. Trump doesn't care about free speech, and neither do those who cheer him on. He cares about white male supremacy. If PC didn't exist, people like Trump would have to invent it. Which, I would say, they did.