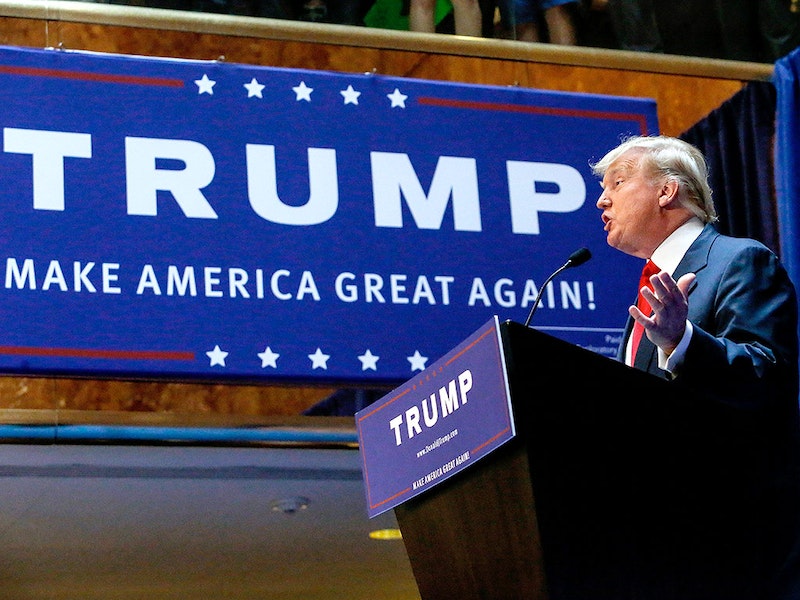 I’m not a Donald Trump supporter. That’s not based on what he’s said on the campaign trail. It’s nearly impossible to untangle his unique speaking style that can be described as a cat’s cradle of reality TV banter, political bravado, and aggressive chest-beating. I’m more fascinated by what Trump hasn’t said. Within his campaign’s uncharacteristically diplomatic slogan “Make America Great Again” are his boldest intentions. Those words are printed in 72-point font on baseball caps. They also austerely adorn the man’s podium when he speaks to crowds. Yet I haven’t heard any talk about what the slogan means.

Trump’s often called a fascist. To me, “Make America Great Again” is only a partially fascist statement. It doesn’t immediately reveal a facet of historical-political revisionism which is part and parcel of fascism. It reads more closely as an emotional plea for autobiographical revisionism. It’s effectively about returning to the glory days. Bruce Springsteen’s “Glory Days” is not most successful in speaking to nostalgia but in commenting on how the fundamental recklessness of bygone days can sometimes give way to a less glorious future.

Springsteen wrote his song in the mid-1980s. It jives neatly with what was a popular time for road trips, popular culture, and a belief that the “trickle down” economics allegedly responsible for this American renaissance was bullet proof. In every cinematic portrayal of 80s America there’s a can of Coca-Cola and not so far behind a smiling family in a yard with a barbecue. In 1987 some of these intimate gatherings would’ve had a copy of Trump: The Art of the Deal underneath the can.

The mid-80s were great for Trump. This was before his first divorce, the deals done artlessly, the first of his twin 90s bankruptcies. The 80s retrospectively must have seemed like a glass of water to a man in hell. His plea to make America great again is essentially a selfish one.

There was widespread income inequality in the 80s. The minimum wage was frozen at $3.35. Federal assistance to local governments was cut substantially, thereby cutting the budget for public housing in half. If you were broke you certainly weren’t looking for a helping hand because that hand had effectively been amputated. “Make America Great Again” refers to a nostalgic time in which one group was able to amass gold reserves disproportionate to another group. President Ronald Reagan suggested that research be undertaken into the possibility of returning to a new gold standard.

One of the greatest ironies of Trump’s campaign is that amongst his supporters are a large number of working-class people who refuse to recognize an essential irony; working-class people voting for Trump is like a caged bird voting for a cat to be let in the house. They’re not only voting against their best economic interests but also voting for the lie that their candidate has their best economic interests in mind. In its most gentle interpretation Trump actually making good on this promise to restore wealth to the working class has mostly to do with resurrecting his own image and building upon his own considerable wealth. After all, this is the man who has suggested that being around unsuccessful people is one of the cornerstones to maintaining success. Whatever may be said about Trump’s ego, the truth is that he doesn’t lack the support of millions who are willing to throw themselves towards his flame.