Survival of the creepiest. 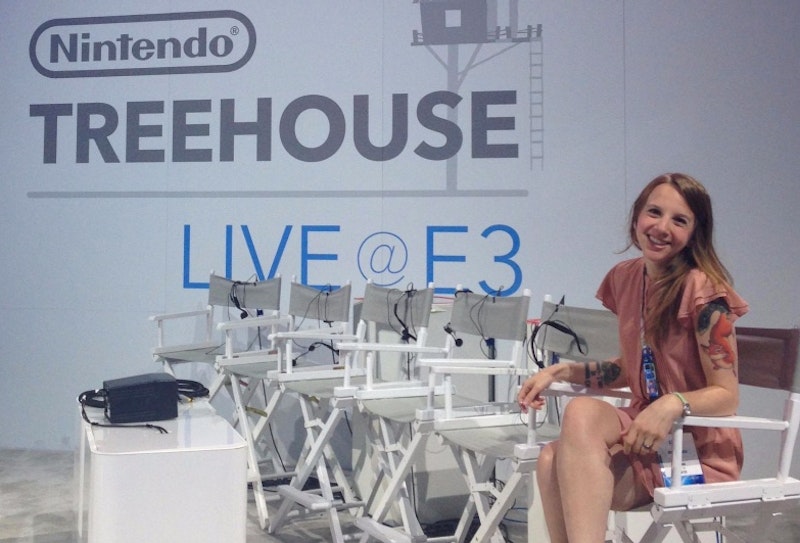 You may have read that the feminist activist Alison Rapp—a critic of the anti-feminist coalition called #GamerGate, a defender of child pornography, and a secret prostitute—was fired by Nintendo. Regardless of whether you disapprove of her, you have to admit by this point that she’s a stellar example of someone who (to use gamer-like terminology) could be attacked on multiple fronts yet will surely throw up the “misogyny” shields if you do, transforming you from Concerned Citizen into Patriarchal Troll. You can’t win.

Rapp was still being partially defended as recently as this past Monday—in a high-profile venue, The Washington Post—by Caitlin Dewey, who rather anemically offers that we can’t be entirely sure that Rapp’s apparent escort service profile is really hers, not a fake account created by her enemies (who have also now identified her husband as a polyamorist encouraged to explore his “hetero-flex” side by Rapp). Regardless, suggests Dewey, it is alarming that critics of someone like Rapp would engage in “oppo” research against her. Well, maybe.

There are often solid reasons to want to know whether ardent online feminists have, shall we say, other “issues.” Sometimes you can’t help suspecting. I wrote yesterday about nerds and bullies sometimes forming co-dependent relationships. There are other cases of ostensibly-opposed forces forming weird symbiotic relationships: bootleggers and Baptists (benefiting from the illegality of rum in different ways), sadists and masochists, left and right pundits in need of people with whom to spar, police and military forces in need of bad guys to justify their budgets, etc. Surely at least some feminists—especially of the younger and more radical sort—exist in a similar weird relationship to their purported patriarchal abusers. Where would they be without each other? Like many a campus leftist faking racist graffiti on the dorm wall, if the feminists had no oppressors, they might have to create them (with the help of sock puppet accounts, it appears some online feminists have).

As with so many other feminist tactics, the online outrage of the feminist-era she-defenders also seems to have oddly un-feminist, even brutally retrograde practical results. Their more sensitive and well-meaning critics are shamed into silence while the brutes are egged on and empowered by the fight. You know, it’s as if the feminists want to silence wimps and, dare I say it, encourage the handful of most dominant males to rise up and oppress them. The feminists say they want equality and with each move seem to create filters for rewarding alphas. Is this time really any different than the creation of countless such evolutionary filters throughout our history? Except now we’re not supposed to say what’s happening.

James Taranto has written about the psychology research suggesting a tragic pattern of modern feminist women ending up depressed and lonely because as they rise in social and economic status, instead of embracing their male equals, they find themselves increasingly disenchanted with feminized, equalized males and begin pining for a dwindling handful of truly powerful CEOs and macho politicians. When you become a princess, you may not be satisfied with any Prince Charming except an actual prince. Men are quite content to date “beneath” them, if she’s pretty, even to date many women beneath them, but instinct tells women—bearers of the rare and precious eggs in the reproductive process—to wait for (a now shrinking contingent of) Mr. Right.

And this may have social implications reaching far beyond those unexpectedly lonely women themselves. What if the liberated-yet-unhappy women begin seeking out more dominant, brutal men from beyond their now-feminized society—invaders, gangsters, foreign patriarchs—to replace the lost domestic alphas? (A hyperbolic amateur online video suggests this may be a primary cause of cultures’ collapse.) Crucially, the gals may seek out the brutes not because they’re still insufficiently liberated but because, well, they sort of can’t help craving the conquerors (even if only in a metaphorical sense). They may find there isn’t a damn thing feminism can do to change that biological impulse.

What if much-maligned traditional monogamy was not a barrier to finding Mr. Right but instead was the best alternative to women throwing themselves at big hunks from the other side of the hills who turn out to be gang-rapists? Western-raised women have been rushing to go join ISIS in surprising numbers, by the way. Makes perfect sense—unless you’re still stuck in the liberal delusion that women want feminist males.

In other words, yes, women may talk a male into being a feminist—but then go find non-feminist mates (one study showed women are less attracted to men once they talk the men into doing household cleaning chores). And not only do feminists not notice in any of this a contradiction—since creating a world of many feminist males (or perhaps we should call them cowards) and a few sex-worthy mates (the cads) looks just fine to the gals in the short term, before they do the math necessary to realize how insignificant each female is going to be in the harem.

The feminists also don’t see why you, whether a male or a non-feminist female, would be reluctant to play your assigned role in this whole process. You should walk contentedly into oblivion, obviously. Those are the new rules of the political game, built on a very ancient biological platform.