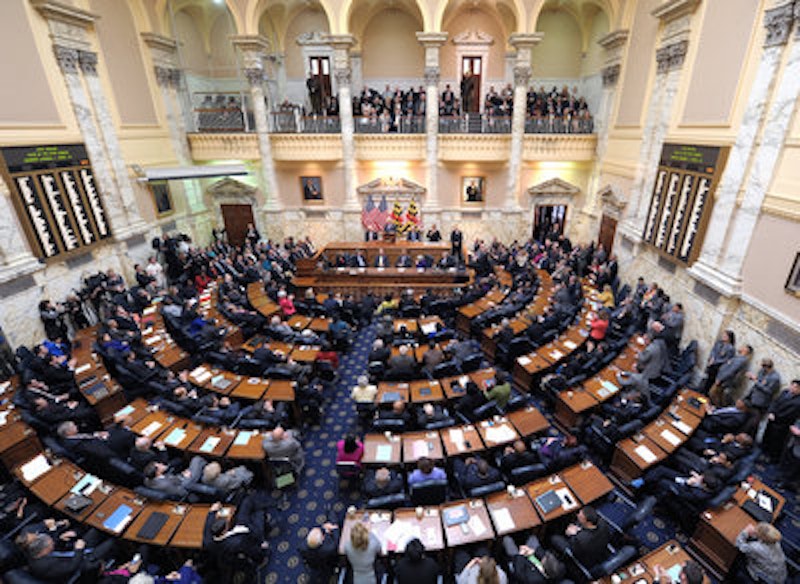 In many ways, big and small, obvious and mysterious, the Maryland General Assembly session that convenes this week will be an elaborate staging area for the 2018 elections as both major political parties set the tone and the tactic for recapturing the governorship as the initial step to reshaping the state’s legislative districts as well as its eight congressional districts following to the 2020 census. The rest is background noise.

The Democrats, unaccustomed to being out of power for more than four years, will be angling to eject the consistently popular Republican Gov. Larry Hogan, who has the best chance of serving two terms since Theodore R. McKeldin Jr.’s election in 1950. And for his part, Hogan will be engaged in a duel not only with numerically superior Democrats, but also shadow-boxing with the brooding and highly unpopular presence of President Trump as an unwelcome backdrop to his own political future in the blue state. Trump lost Maryland by 26 points.

Trump, directly and indirectly, is likely to be more the subject of debate and discussion because of the effect of his policies and devolution of government on a broad swath of life in Maryland as well as Democrats’ continuing efforts to backpack Trump onto Hogan as campaign baggage. Hogan, though, has proved to be an artful dodger, withholding his vote from Trump, panning Trump’s policies and, more often than not, picking his fights carefully while allowing Democrats to maintain their social agenda. In their turn, Democrats hope to stigmatize Hogan as a toxic proxy for Trump on the ballot in November.

It’s an accepted stratagem of legislating to avoid as many tough issues as possible during an election year. So, Democrats will be maneuvering, through bills and other issues, to force Hogan into embracing as many Trump issues as possible—if not the president himself—as impetus to encourage a massive Democratic turnout in November, following similar turnouts in Virginia and Alabama. An example: The Trump Justice Department’s possible crackdown on the potentially lucrative marijuana business just as it’s getting underway in Maryland with widespread public support. But Democrats must be careful not to overdo their ploy.

All statewide officials, members of congress, legislators, county executives and lesser lights will be front and center during the midterm elections in which both Democrats and Republicans are convulsed by ideological rifts and the key to both the primary and general elections hasn’t changed in more than 2000 years—voter turnout. Fundraising ends for 90 days the date the session begins, Jan. 10.

So, in the existential sense, the approaching session is a tactical drill for survival not of the fittest but of those with the most money, the best organization, the highest recognition and gift of salesmanship. Of the 2000-3000 bills that will be introduced, only a handful touch the lives of every Marylander. The rest are narrow interest bills designed to please this or that group or to advance the cause or candidacy of its sponsor. The baloney detector is performance art in the State House.

The usual cast of characters in Annapolis will have to share the state’s biggest political stage with pilgrims traipsing to hearing rooms and watering holes to plead their cases as well as to be seen, especially those outside the State House’s tight little circle who are seeking resume upgrades within Maryland’s electoral pecking order. The Democrats have seven declared candidates for governor (Maya Rockeymoore Cummings has suspended her campaign for governor.)

Though any citizen has entry rights to the rarified air of a legislative session, those with legitimate calling cards include County Executives Rushern Baker, of Prince George’s, and Kevin Kamenetz, of Baltimore County, who have jurisdictional business with the legislature. Richard S. Madeleno is a member of the Senate and has a platform all his own. The others are on the hunt to meet and greet.

Maryland’s $43 billion operating budget, that arcane document that number-paints the state’s quality of life, will be the session’s centerpiece this season mainly because of the effect of Trump’s tax overhaul. For better or worse, the state’s tax system, along with those of 44 others, is tied to the federal tax system. So, the near-term and long-term rumbles from the tax revision have already angered those who’ve tried to pre-pay their property taxes to beat the looming reduction and cap. In the long view, property owners’ losses are the tax collector’s gain. Hogan has pledged to work with Democrats to offset the shift. No one yet knows the full effect of Trump’s tax cut on the economy of Maryland.

What’s more, Trump’s determination to shrink the federal workforce could be a category-five disaster for Maryland. There are 16 federal installations in Maryland, and the state has the fourth largest federal workforce—296,295 employees—in the nation. In addition, more than a quarter of the state’s budget, close to $11 billion, comes directly from the federal government through one program or another. And even the prospect of a federal government shutdown because of Trump’s stubborn policy demands could rebound on Maryland’s revenue base.

What Trump has been unable to accomplish through Congress he is undermining with executive orders and directives rescinding actions taken by President Obama. Especially threatened are environmental programs, which Trump is rolling back as favors to captains of industry. Hogan has promised to maintain Maryland’s strict environmental standards.

Hogan will soon get his chance. Trump has moved to allow oil drilling along the East Coast’s continental shelf, which is opposed by nearly all governors of coastal states as well as a dozen attorneys general. Offshore drilling is a threat to the Chesapeake Bay watershed, Maryland’s celebrated environmental treasure and a major economic resource. Hogan has said, “I’m not in favor of offshore drilling.” He’ll get another chance to dump on Trump, if he chooses, or be held accountable if he doesn’t.

No question that sex will be on the minds of many legislators. Sexual misconduct, in its many manifestations, is among the dominant issues of the day, brought on by the exploitation and intimidation by the high and the mighty, including a dozen allegations against Trump. No doubt there will be a blizzard of proposals to curb or punish the prurient and the predators who assault, degrade and molest.

Hogan and Democrats, numbers apart on the issue, will revisit the matter of family leave, unfinished business from last year’s session. The parrying begins with a veto override. They agree on substance but differ on degree. The Democrats favor a more generous package which would apply to a broader range of businesses, while Hogan supports a narrower application which he claims would be less harmful to small employers. This, no doubt, will be a work in progress.

The dominant undertone of the session is redistricting (or reapportionment) that will rarely be spoken but will motivate most backstage maneuvering. The issue is especially important to Democrats because of a pending Supreme Court case involving the Sixth Congressional District in Maryland’s Western tundra. The present congressman, Democrat John Delaney, is abandoning the seat to run for president, and two wealthy Republicans have already announced their candidacies.

Simply put, the governor controls the redistricting process, and whichever party occupies the governorship draws the maps. In this era of precision mapmaking, the process has been reversed: Members of Congress get to choose their constituents instead of the reverse. And that’s the nub of the Supreme Court case, wherein Republicans claim they were denied their right to choose because Democrats (Gov. Martin O’Malley and legislative leaders) packed the district in their favor. In short, though the process is still more than two years away, Democrats need to recapture the governorship this year to protect their seven of eight congressional seats.

Every session has a rhythm and a cadence of its own. No two sessions are alike. And this one, ushered in with all of its amplified aura of self-importance, just might live up to its advance billing as a make-or-break meeting for both parties.