There's just no way they can vote Republican. 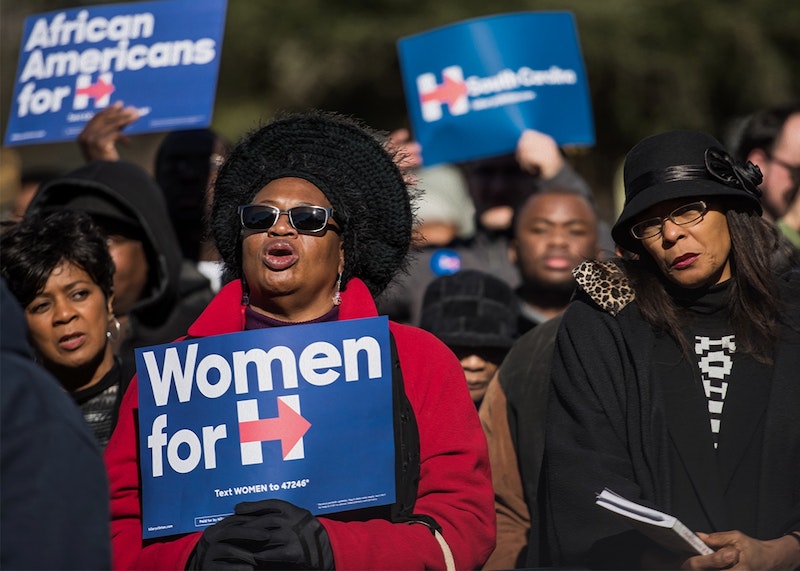 "To win, the Republican Party needs to appeal to all segments of the electorate," Dick Morris and Eileen McGann write in their screed Armageddon: How Trump Can Beat Hillary. You'd think they elaborate on how Trump could improve his numbers with women, or Hispanic voters, or how he could appeal to… well, all segments of the electorate, like they said. But instead, they insist, "The process has to start with an answer to the question: How do we get white turnout back up?" Then they natter on about white voters for a while.

Morris is a notorious tool, but he's a symptomatic tool. For the Republican Party, "all segments of the electorate" is the same as "white voters." From Ronald Reagan's racist, sexist fantasy of welfare queens, through George H.W. Bush and Willie Horton, on to Tea Party birtherism and Trump's vicious fantasy of hurting immigrants this week, the GOP has defined itself—not exclusively, but importantly—as a party of white identity. People of color are invaders and despoilers of the one true United States; they are takers, not makers, sucking righteous America dry. The GOP has, for decades, appealed to voter's white identity. Trump’s amplified that strategy, but he didn't invent it.

You wouldn't know that the GOP was a white identity party from Crispin Sartwell's recent piece at Splice Today. Instead, Sartwell argues that white liberals are generally racist—which is certainly true. He also argues that the Democratic Party frequently takes black voters for granted—which is also true. "The entrapment of black voters in the Democratic party has been a disaster," he concludes. But how exactly did that "entrapment" come about?

Black voters weren't fooled into joining the Democratic Party; Lyndon Johnson didn't hypnotize them. The reason black people vote for the Democrats in large numbers is straightforward. The Democrats frequently fail to address black issues, and local officials like Rahm Emanuel in Chicago consistently support a racist police system, but Democrats also ask for black people's votes. They want to expand the social safety net, which disproportionately helps black people, because generations of racism has left black people on the whole poorer than whites. Democrats want to raise the minimum wage, which disproportionately helps black people. Democrats don't try to throw blacks off the voting rolls, the way Republicans have done in recent years. For all of these reasons, black people consistently do better economically under Democratic administrations.

This doesn't mean the Democratic Party is good or not racist. On the contrary, it’s quite racist, and has shown little real inclination to deal with the issue of police violence or mass incarceration. But, nonetheless, when black people vote for the Democrats, they're making a rational choice between a party that occasionally tries to address their concerns, and a party that demonizes and stereotypes them, and is ideologically organized around treating them as subhuman outsiders.

Sartwell suggests that the problem is the two-party system. But there's no reason a third party wouldn't also be racist—or even more racist, given fringe parties in Europe. And if black voters decided as one to vote Green, all they'd do is ensure Democratic losses and install a permanent Republican majority. That's how a winner-take-all system works. Black voters who realize that haven't been tricked. They're simply using their votes as wisely as they can, given bad options.

The dedication of black people to the Democrats undermines efforts to change the GOP, Sartwell argues; he points to Rand Paul, who’s talked about incarceration a bit. The assumption that black voters should flock to the Republicans because one Senator has made vague gestures in their direction is presumptuous. But overall, the truth is, when Republicans are less racist, they do better with voters of color. George W. Bush, who pushed for immigration reform, and whose compassionate conservatism was at least rhetorically more friendly to marginalized people, won 44 percent of the Hispanic vote in 2004. He won nine percent of black voters—which isn’t good, but looks great compared to Trump. It should shock no one that the most openly racist presidential candidate in modern history is doing unprecedentedly poorly with black voters. Black voters and voters of color do not mindlessly vote Democratic. They vote by making calculated and generally rational judgments about which candidate, and which party, hates them the most.

"The fact that black voters have voted over 90 percent Democratic for decades leaves them almost wholly without power," Sartwell insists. That's completely backwards. Black voters have limited power because they live in a racist country. Faced with two racist parties, black voters make the best of a bad deal, and vote for the person who is not screaming fascist gibberish and flirting with the KKK. For white people, whether progressive or conservative, that can be an uncomfortable thought.